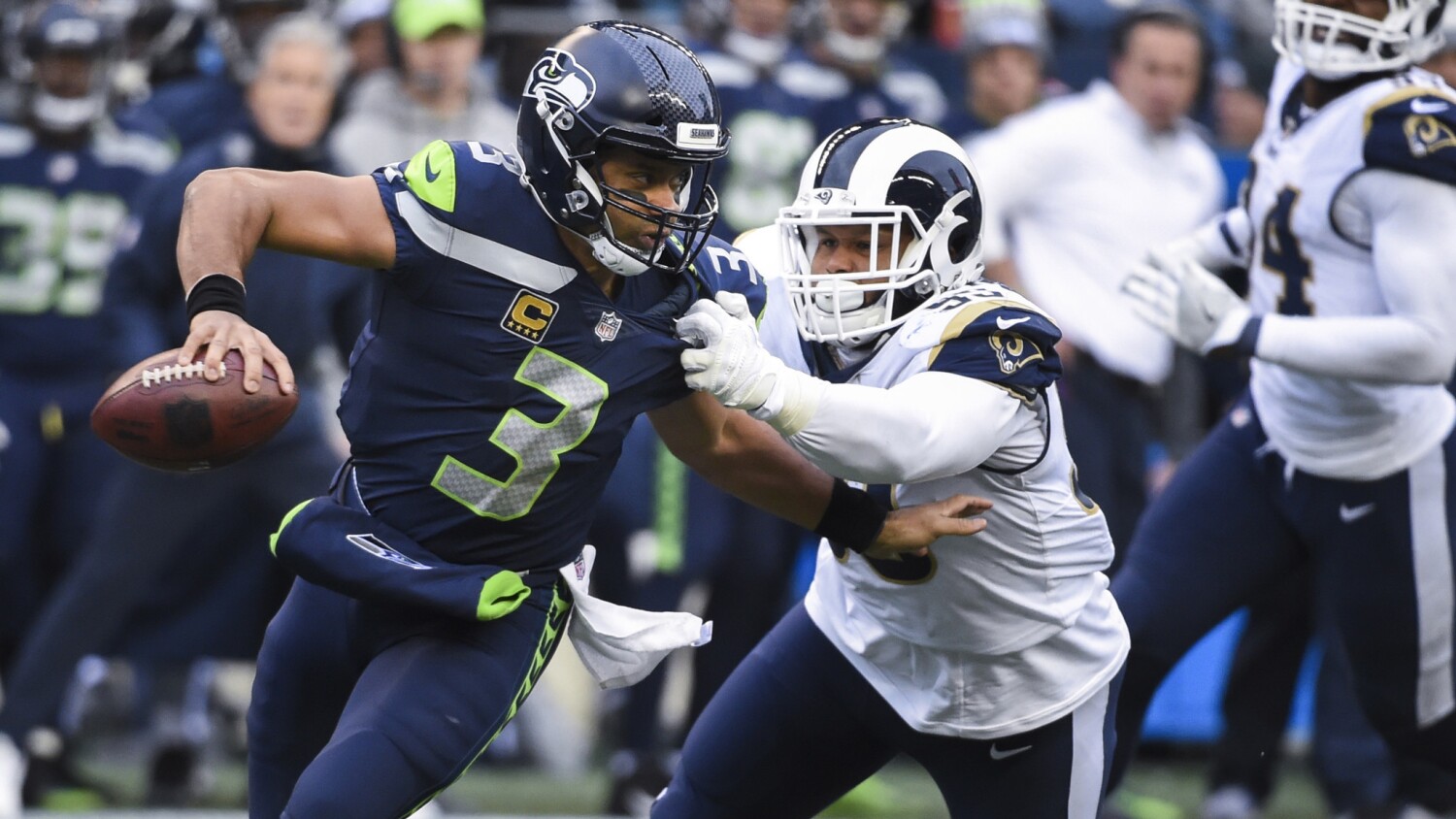 Through the first half of the season, Seattle Seahawks quarterback Russell Wilson played his way into contention for the NFL most valuable player award.

Rams lineman Aaron Donald is on track to possibly win defensive player of the year for the third time.

The two stars will continue to make their cases — and renew one of the NFL’s best matchups — Sunday when the Rams (5-3) play the Seahawks (6-2) in an NFC West game at SoFi Stadium.

Donald has been chasing — and sacking — Wilson since the Rams selected Donald in the first round of the 2014 draft.

Twelve of Donald’s 81 sacks were collected against the Seahawks, the most by Donald against any team. But the elusive Wilson also has escaped Donald’s grasp numerous times.

“There are times where I had him wrapped up and he still found a way to get the ball away,” Donald said Thursday during a videoconference with reporters before practice. “So, it made my job harder, but we are definitely prepared and ready for that challenge this week.”

Wilson this week described Donald as “the best defensive player I’ve ever played, for sure.” Donald is “close to perfect,” Seahawks coach Pete Carroll said.

“The thing that’s always separated Aaron is his speed,” Carroll said. “He’s just faster than guys are that play the position. … He’s invented moves by jumping through pass-rush opportunities and stuff.”

On Sunday, the Rams will be playing for the first time since suffering a 28-17 loss to the Miami Dolphins on Nov. 1. The defense was not the problem in a defeat that featured four turnovers by quarterback Jared Goff.

Donald sacked and stripped the ball from rookie quarterback Tua Tagovailoa on his first pass attempt. It was Donald’s ninth sack this season.

The Rams need another strong effort from Donald and the defense to control a Seahawks offense that is averaging a league-best 34.3 points per game. Wilson, a ninth-year pro, has passed for a league-best 28 touchdowns, with eight interceptions. His 117.1 passer rating ranks just behind the Aaron Rodgers’ league-leading 117.5.

In last Sunday’s 44-34 defeat to the Buffalo Bills, Wilson completed 28 of 41 passes for 390 yards and two touchdowns, with two interceptions. He has had five passes intercepted in the last three games.

But Rams players and coaches do not anticipate a trend.

“This guy is as resilient of a competitor as I’ve ever seen,” Rams coach Sean McVay said.

“What you try to do is you just show your guys his play style, so that when they face him, even though it’s a tall task, they’re kind of used to a rhythm of how he tries to make people miss or how he operates within the pocket, how he operates outside of the pocket,” Staley said. “Those are the things that we’re going to be spending all week talking to our guys about.”

Offensive lineman Andrew Whitworth (back) and outside linebacker Leonard Floyd (knee) were held out of practice, but are expected to play Sunday, McVay said. Running back Darrell Henderson (quadriceps) was limited but is expected to play. “He was a little bit banged up, but the big man is feeling good. He’ll be ready to go,” McVay said. Receiver Cooper Kupp (oblique) and rookie outside linebacker Terrell Lewis (shoulder) were limited. Offensive lineman David Edwards (abdomen) returned to practice. … Tight end Tyler Higbee said he was recovered from the hand injury he suffered against the San Francisco 49ers, which caused him to sit out one game and play with a heavy wrap against the Dolphins. “I’m good now,” he said, adding, “I’m back to it and ready to go. It’s fine.”