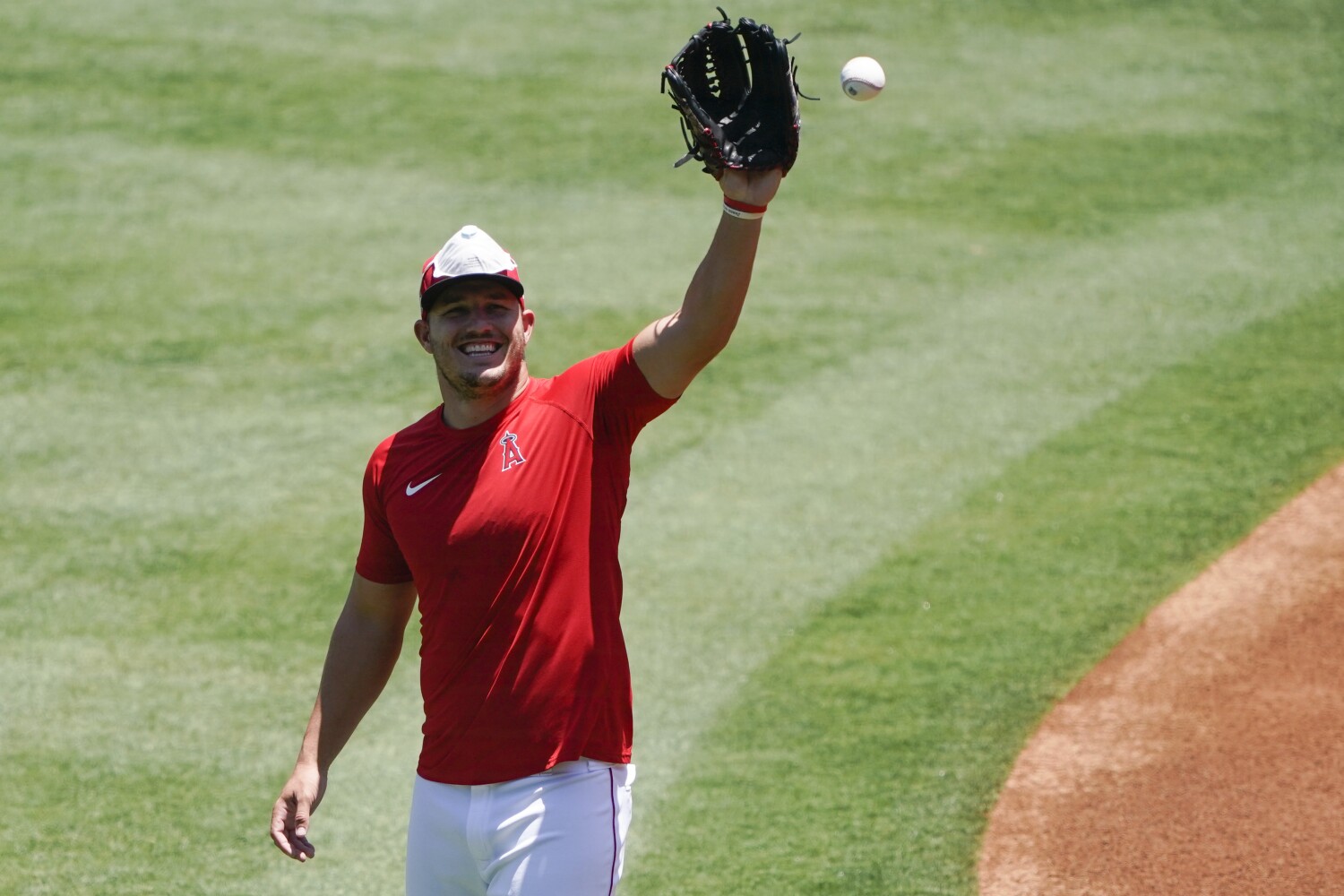 Whatever concerns Mike Trout had about playing baseball amid a global pandemic with his wife due to deliver the couple’s first child in early August appear to have been assuaged.

When he reported to training camp in early July, the Angels star center fielder said that he and his wife, Jessica, had daily discussions about the possibility of sitting out to avoid becoming infected by the coronavirus.

But Trout was a full participant for 17 days of workouts and intrasquad games, he scalded a 111-mph double to left field in Monday night’s 1-0 exhibition win over the San Diego Padres in Petco Park, and he appears to be a full-go for Friday night’s regular-season opener at Oakland.

“When we first got here, I had a conversation with him addressing his concerns,” manager Joe Maddon said on a videoconference call. “Since then, frankly, he’s been better about things and hasn’t asked me a lot of questions. We had that one getting-into-it type of conversation; otherwise, it’s been more baseball related.”

Trout, a three-time American League most valuable player, plans to leave the team for the birth of his child, but had he opted out for the entire 60-game season, the Angels would have had little chance of making the playoffs.

Even with Trout, the Angels might have a gaping hole in the middle of the order come Friday. Anthony Rendon’s oblique injury appeared to take a turn for the worse Monday, throwing the third baseman’s status for the opener in doubt.

“All I know is that he’s more sore today, and with that, he really had to back off his work,” Maddon said. “On the surface, it would appear he’ll have to be pushed back. Knowing him, he’s going to want to play in that first game. I can’t tell you for sure how long he’s going to be out.”

Rendon, who signed a seven-year, $245-million contract in December after helping Washington win the 2019 World Series, felt tightness in his rib cage in last Wednesday’s intrasquad game and hasn’t played since.

“These types of injuries are so unpredictable,” Maddon said. “It’s going to be slow for the next couple of days. I don’t know where that puts him in regard to the end of the week. He needs a couple of days to get that [soreness] out of there.”

There was more encouraging news on the pitching front Monday. Griffin Canning, slowed by an elbow injury earlier this spring, threw six shutout innings against the Padres, giving up three hits, striking out five and walking two.

The 24-year-old right-hander threw 76 pitches, 47 for strikes. He struck out Manny Machado swinging twice, on a 94-mph fastball in the first inning and a 93-mph fastball in the sixth. He controlled both corners with his slider and closed his outing by striking out Tommy Pham with an 84-mph curve.

“It felt really good,” said Canning, who had a platelet-rich plasma (PRP) injection in early March after an MRI test revealed chronic changes to the ulnar collateral ligament and acute irritation in the joint.

“I feel like [my fastball] is always a bit better when I’m commanding my other pitches, kind of almost sneaking it in there. I was throwing a lot of off-speed early and could tell they were kind of sitting on that later, so I was able to sneak some fastballs in there.”

Canning wore what he called a “vibrating heat sleeve” on his arm between innings Monday.

Angels reliever Keynan Middleton kneeled during the national anthem with his right fist raised in the air, joining several other players around the league in protest of racial injustice and police brutality.

The right-hander, who gave up two runs in the 10th inning of a game that was extended for teams to work on the new extra-inning, runner-on-second rule, was not available after the game to discuss his gesture.

Pac-12 approves nonconference games to make up for cancellations