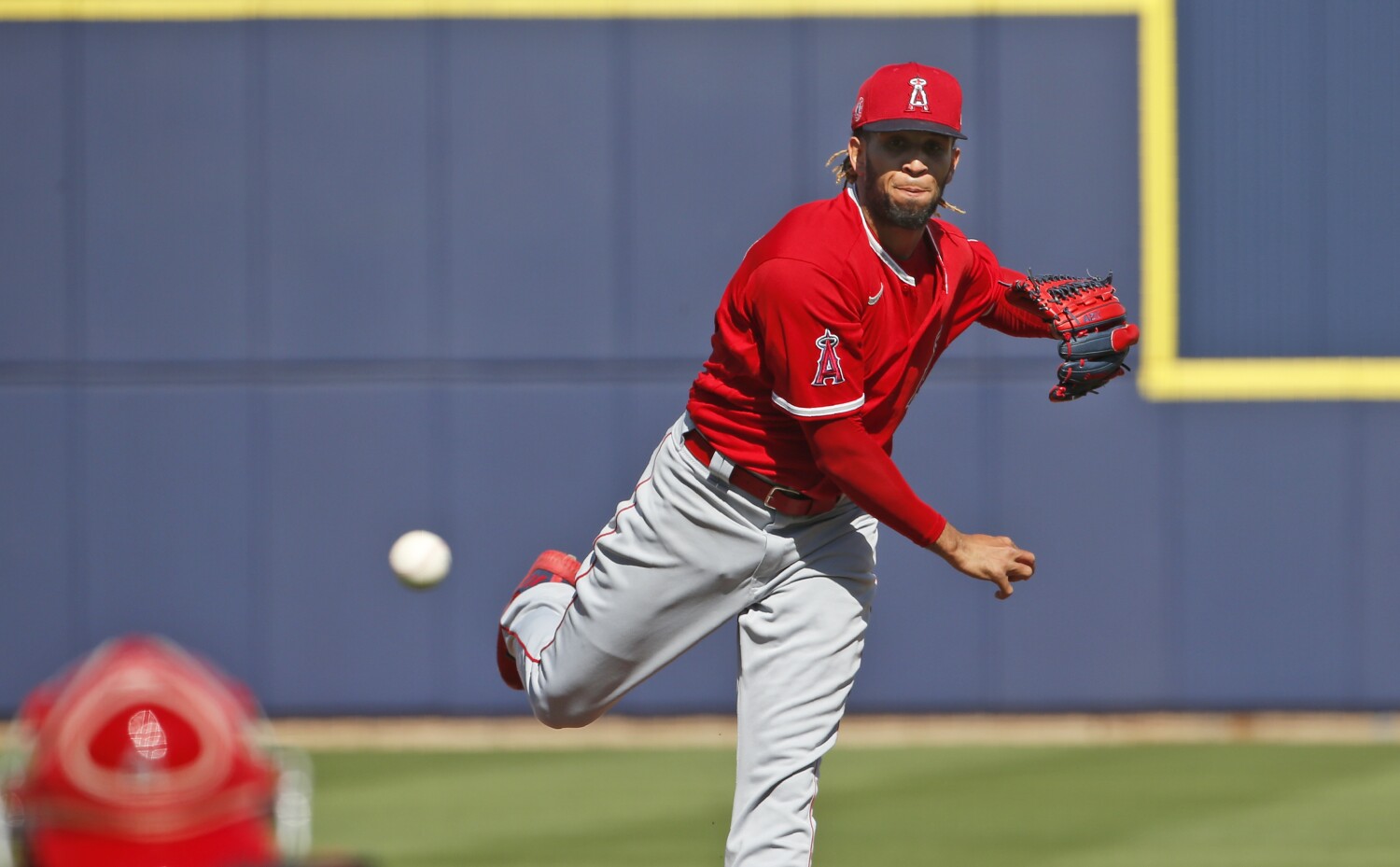 Angels reliever Keynan Middleton on Monday kneeled with his fist in the air during the national anthem at Petco Park, joining several other players around the league in protest of racial injustice and police brutality.

The right-hander, who gave up one run in the 10th inning of an exhibition game against the San Diego Padres, was not available after the game to discuss his gesture.

Manager Joe Maddon said Middleton first brought up taking a knee during the anthem in a videoconference in June, when the team and other Angels employees met to discuss the Black Lives Matter movement among other racial and social justice topics after the death of George Floyd.

Middleton stood out during the meeting. Maddon described Middleton as “passionate” about his beliefs.

“That’s what he showed you tonight,” Maddon said. “I have a granddaughter who’s going through the same thing right now and I totally support her reaction to all of this.

It has never been about the military or the flag. The players and coaches are using their platforms to peacefully protest.

Maddon added that Middleton did not intend disrespect by his actions.

Middleton is expected to address his decision to kneel during the anthem, a gesture that first garnered widespread attention when former San Francisco 49ers quarterback Colin Kaepernick did it in an an NFL game in 2016, in a social media post.

“I’m very proud he stood up for his beliefs tonight,” Maddon said. “I really am. It’s not easy to do that, a young man like himself, the only one out here doing that.”

Elsewhere in California, San Francisco Giants manager Gabe Kapler joined players and coaches in taking a knee during the anthem around the same time as Middleton. Video of the act swirled around social media for hours. Major League Baseball’s Twitter account blasted the message to its 8.5 million followers and defended the actions of the Giants when fans pushed back.

“Supporting human rights is not political,” the account wrote in response to a tweet that asked MLB to keep politics out of baseball.

No Angels followed Middleton’s lead but Maddon warned against misinterpreting that decision. He said the team, as a whole, was supportive of Middleton.

“I have totally been impressed by our guys and their interaction,” he said. “The fact is, a big part of it is everybody’s seeking more information. You want to be able to, when asked the question, be able to give an answer that you thought about, and thought all the way through.

“And that was the purpose of this. That’s why I wanted to do these Zoom meetings in advance because it is an uncomfortable subject and situation. And a lot of people won’t know exactly what they feel, or how to express it. So I thought it was important that we got together as a group to help each other understand our positions, and then be able to move forward in an intelligent manner that represents us well. “

Maddon doesn’t know if Middleton will continue to kneel during the anthem when the season begins Friday.

“Whether he does that again, that’s up to him,” Maddon said. “It is his choice. And I promise you it will be well thought out.”