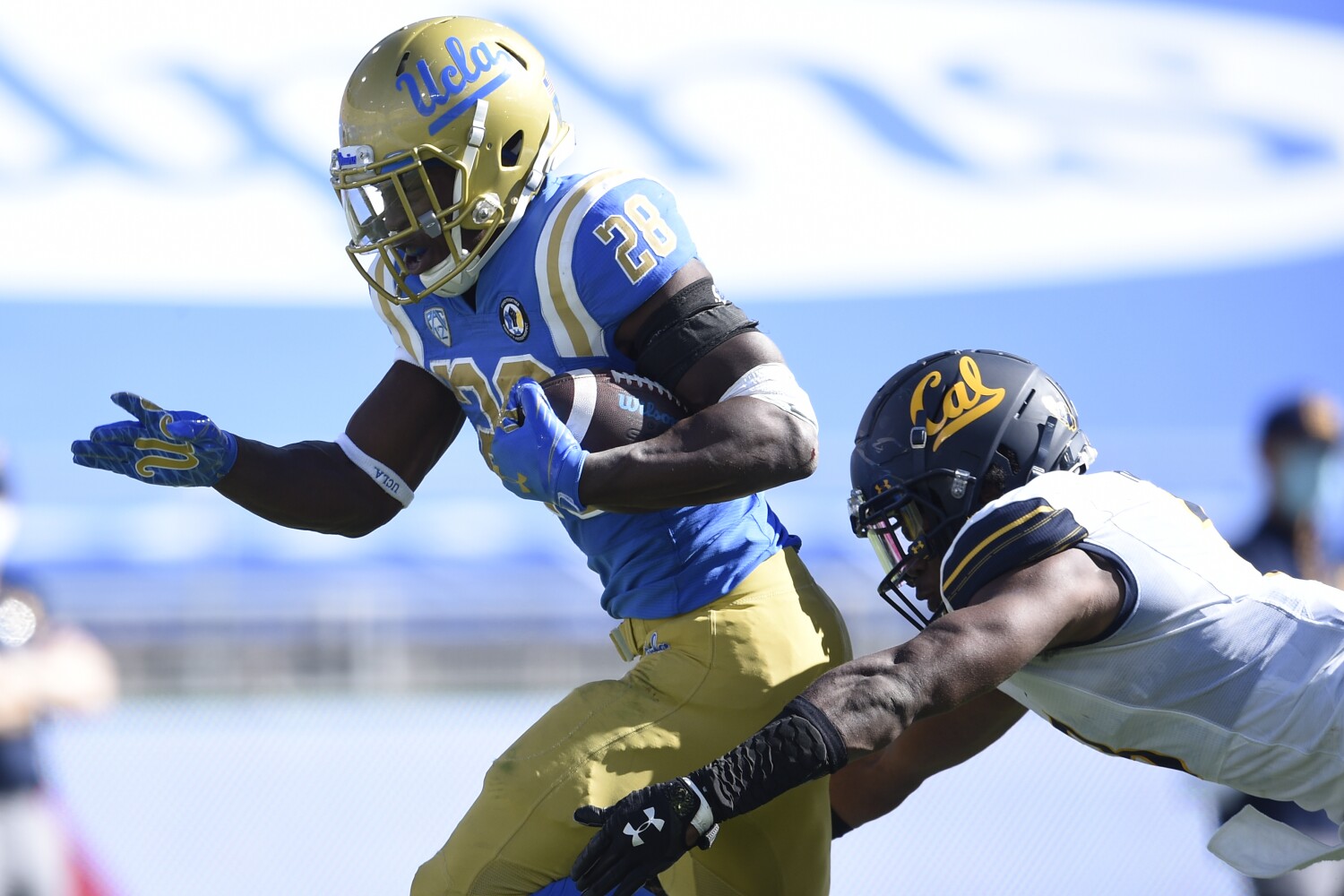 Brittain Brown is a nice guy until someone puts a football in his hand.

Then he turns angry.

Brown’s teammates had talked about the phenomenon during training camp, and UCLA fans got to see it Sunday at the Rose Bowl.

The graduate transfer running back from Duke took a handoff from Dorian Thompson-Robinson early in the fourth quarter and cut outside. Three California defenders converged with a chance to bring Brown down just past the line of scrimmage.

An attempt to wrap him up around the upper body failed. So did efforts to knock out the ball, Brown sloughing off the probing hand.

Finally, a Golden Bears defender dove while trying to bring him down around the five-yard line. That didn’t work either, a determined Brown only falling after he had crossed the goal line for his first touchdown in nearly two years.

Brown said his 31-yard run, the final score during UCLA’s 34-10 victory, was just a matter of determined running after making his initial move.

“No juking, no cutting, nothing,” Brown said, “because as long as you do that the defender is going to have to react to your speed and at that point it’s kind of too late.”

Brown’s hard-charging score illustrated why the Bruins might not be sunk in their efforts to replace Josh Kelley. While Demetric Felton Jr. and Kazmeir Allen provide speed that plays well outside the tackles, Brown can pound defenses with his relentlessness, giving coach Chip Kelly a variety of options with his running game.

“It’s kind of throwing the defense off,” said Brown, who finished with 71 yards in 12 carries as part of a UCLA running game that piled up 244 yards. “You’ve got that speed guy. You’ve got a speed and power [guy]. We’re kind of throwing everything at them, so it’s good to have different skill sets going in there.”

UCLA could have another running back soon with Martell Irby rounding into form from a knee injury that has slowed him since training camp. Brown said Irby was getting close to being able to make his season debut, which could come Saturday when the Bruins (1-1) play No. 11 Oregon (2-0) at Autzen Stadium in Eugene.

Before Sunday, Brown had not scored since he was a Blue Devil, running for a touchdown against Temple in the Independence Bowl in December 2018. He aggravated a shoulder injury early in the 2019 season and appeared in only three games, making a combined 12 carries.

Brown underwent a surgical procedure and recovered during the extended layoff created by the COVID-19 pandemic. What he unveiled in only his second game with the Bruins was, well, madness.

“When people say I’m running angry,” Brown said, “it’s just me running as hard as I can and just trying to break one off.”

UCLA defensive lineman Osa Odighizuwa won’t have his usual cheering section during his final game in his home state.

Friends and family won’t be allowed in Autzen Stadium because of restrictions related to the novel coronavirus.

“My family’s going to be there in spirit,” said Odighizuwa, who grew up about two hours away in Portland. “I know they love me. I know they’re going to be watching.”

Among those paying close attention will be Owa Odighizuwa, the former Bruins defensive end who went on to play with the New York Giants. Big brother has continually helped Osa by watching game footage, discussing technique and advising him how to stay healthy.

“I would say that’s a big part of him teaching me, just before I got to UCLA, how to take care of my body properly,” Osa said, “and how to keep myself from getting injured like that, you know?”