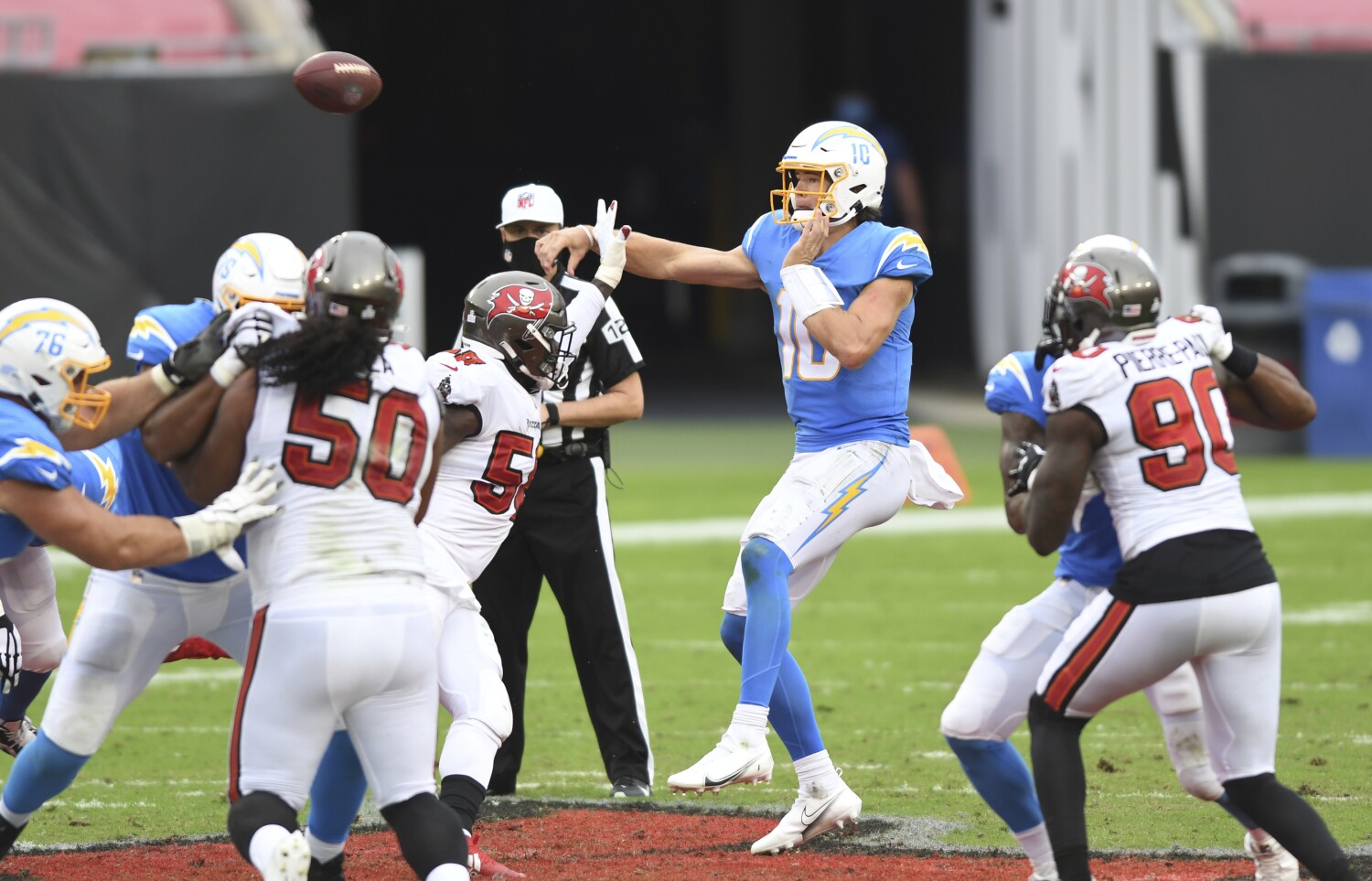 In his third career start, Justin Herbert repeatedly stared down Tampa Bay’s blitzing defense and, in the face of all that fire, produced one of his finest performances.

He finished 20 of 25 for 290 yards, with three touchdowns and one interception. His passer rating was 137.9, his best effort yet.

On Sunday, Herbert and the Chargers will meet a Miami defense that also tries to bury the opposing quarterback in an avalanche of pressure. The Dolphins’ 20 sacks are tied for 12th in the NFL.

“They’re not bashful about blitzing,” Chargers coach Anthony Lynn said. “I think they went 20 blitz-zeroes in one game. We have to be ready for their pressure. That’s going to be a big deciding point in this game.”

Blitz-zero is a football term that basically means the defense rushes everybody but the kicker.

Herbert hit Jalen Guyton for a 72-yard score and Tyron Johnson for a 53-yard touchdown in Week 4 despite the pressure the Buccaneers were sending.

“He stands in there and delivers strikes,” Chargers offensive coordinator Shane Steichen said. “He’s been pretty productive doing it. … He’s calm back there. He sees it well, and he makes the throws.”

At 6-foot-6, Herbert can look over the top of most defenses when trying to identify blitzes. He also has the mobility to elude pressure and extend plays to further stress a potentially exposed secondary.

Herbert possesses the strength and courage to absorb big shots, something that is admirable but not exactly ideal for his long-term health.

“All you can do is max protect and hope you block the right ones,” Lynn said. “When [they] put eight people on the line of scrimmage, you don’t know which five are coming or which six or seven are coming.

“We have a quarterback that came move a little bit. We’ll have a plan. Hopefully, he can get out of harm’s way and make some plays.”

Herbert has the NFL’s third-highest rating against the blitz among qualified passers, trailing only Patrick Mahomes of the Chiefs and Derek Carr of the Raiders. The rookie has thrown for seven touchdowns with one interception under such conditions.

During a four-game winning streak, Miami’s defense has allowed only one quarterback — Arizona’s Kyler Murray last weekend — to finish with a rating above 100. Herbert has topped 100 in three of his last four games.

“They’re dictating to a lot of teams because of what they’re doing scheme-wise,” Lynn said of the Dolphins. “We can not let that happen to us. They’re going to challenge our protection system.”

Herbert has been sacked 14 times in seven games, including twice Sunday against Las Vegas.

One of those came when right tackle Trey Pipkins was beaten. Pipkins was forced into the game after starter Bryan Bulaga left on the Chargers’ first series because of recurring back issues. Lynn said Pipkins performed well against the Raiders beyond “a couple plays” and said he continues to be encouraged by the second-year lineman’s progress.

“I’m not disappointed with Trey at all right now,” he said. “But he was a small-school kid. He had a lot to learn when he got here. He was very raw. But his God-giving ability is really good.”

The Chargers drafted Pipkins out of Division II Sioux Falls in the third round in 2019. They were drawn to his size — 6-6, 307 pounds — and athletic ability.

The plan a year ago was to ready Pipkins to be a left tackle, where he could learn behind veteran Russell Okung, who has since been traded. But Pipkins ended up playing in 13 games, with three starts, because of health issues that thinned the Chargers’ offensive front.

He has played in every game this season, with three more starts, as Bulaga has struggled to stay on the field.

“There’s just those two or three plays I gotta eliminate every game,” Pipkins said. “The thing about that, what really bothers me, it’s stuff that I feel like I can control. It’s not getting beat. It’s me losing a little bit of technique or things like that.”

Bulaga was limited in practice Wednesday, as was right guard Trai Turner, who has been dealing with a groin injury.

Lynn said he hopes Pipkins can learn to play with increased intensity, something that could lead to more consistent performances. Pipkins, who turned 24 in September, said experience is what could help elevate that part of his game.

“I think it just comes with being more comfortable,” he said. “The more comfortable you are with everything you see, you’re able to play faster and add a little of that intensity.”

Defensive end Joey Bosa remains in concussion protocol but did do some individual work on the field Wednesday, a sign that he is progressing toward a return. He was injured in Week 8 and missed the game Sunday. … Running back Troymaine Pope was back practicing and is out of concussion protocol. He also missed the game against Las Vegas. … Running back Justin Jackson (knee) did not practice.

NHL to use crowd noise and other techno wizardry during games