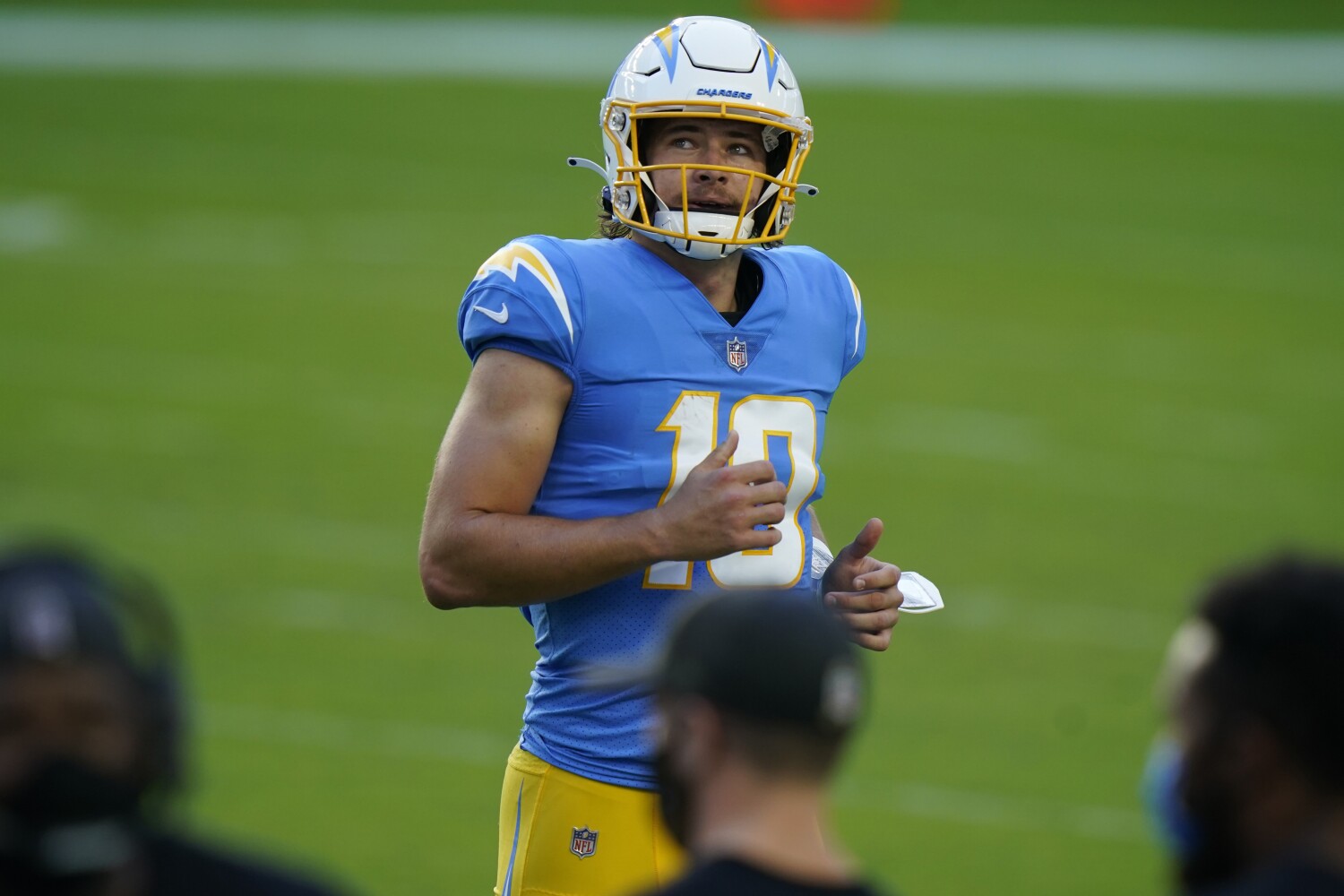 He is 1-7 as a starter, with three consecutive losses, and coming off his least productive game.

Justin Herbert then showed up Wednesday on a video call with the media wearing a jarring buzz cut where he previously had long, floppy locks.

The Chargers’ rookie quarterback was asked if the new style was an attempt to change his fortune.

“It might look like that,” Herbert said. “But, honestly, it was just getting long. Time to cut it.”

To understand how significantly Herbert altered his appearance, consider that he estimated his most recent haircut had come in “probably 2017, 2018.”

Going from one extreme look to the other might be cause to question Herbert’s stylistic judgment. The same could be said of his decision to use the Chargers’ strength and conditioning coach, John Lott, as his barber.

“He said he was pretty good with the clippers,” Herbert explained. “So he took care of that… I think he did a great job. I wasn’t looking for anything fancy. Pleased with it.”

On Sunday, Herbert and the new ’do would seem to have an excellent shot at changing his team’s recent sour luck. The Chargers are heavy favorites to beat the winless New York Jets at SoFi Stadium.

They certainly could use something positive coming off a matchup in which they lost “a total chess match game” at Miami.

That was offensive coordinator Shane Steichen’s description of a 29-21 defeat that featured the Chargers producing a season-low 273 yards and struggling to decode the Dolphins’ blitz schemes.

“They disguised it well,” Herbert said. “They’ve got good coaches and they’ve got guys who are being paid highly. That’s just one of those things I’m going to learn from.”

The Chargers entered the game with a plan to run the ball to combat the pressure and exploit Miami’s all-out blitzes.

At times, they employed Scott Quessenberry as an extra offensive lineman and also used their running backs and tight ends to help with protection.

The Dolphins frequently lined up in max-blitz looks only to drop back into coverage. Herbert was intercepted early in the fourth quarter on just such a play.

“They got us there,” Herbert said. “We had a good plan. We just didn’t execute.”

Though he did pass for two scores, Herbert finished with only 187 yards through the air. He entered the game averaging 307 yards. His passer rating of 86.3 also was a season-low.

Now, the rookie will face a Jets defense that also likes to pressure the quarterback and is known for its aggressive style.

Herbert explained that the experience he gained in Miami can help against New York, as long as his focus remains right.

“You can’t let the Dolphins beat you again,” he said. “You have to learn from it…The way they disguised it gives a lot of people trouble…I know going forward we’re going to be better because of it.”

He was injured Nov. 1 at Denver and missed the last two games, during which the Chargers had only one sack and three quarterback hits.

Edge rusher Melvin Ingram, who missed three games starting in Week 3 because of a knee injury, has no sacks, four quarterback hits and eight tackles.

“He doesn’t have the sack production,” Lynn said of Ingram. “He has a lot of hits and he has a lot of pressures. Sometimes, I think pressures and hits can be more effective than sacks. But I’m sure at some point that’s going to happen for him.”

Ingram is in the final season of a four-year, $64-million contract and is set to become a free agent.

Right guard Trai Turner said he apologized to the team for his unnecessary roughness penalty against the Dolphins.

Turner was flagged in the fourth quarter after tangling with a Miami defender who grabbed him by his facemask.

The game in Miami was just the second of the season for Turner, who most recently has been nursing a groin injury.

In six seasons with Carolina, Turner made five Pro Bowls and never missed more than three games in any one year. Calling it “a long road,” he said he never had an injury that lingered for so many weeks.

Backup quarterback Tyrod Taylor missed practice because of a rib injury. He originally hurt his ribs in the opener… Long snapper Cole Mazza is dealing with an “illness,” according to the team’s injury report.

Do the Angels or Dodgers have any regrets over failed trade?