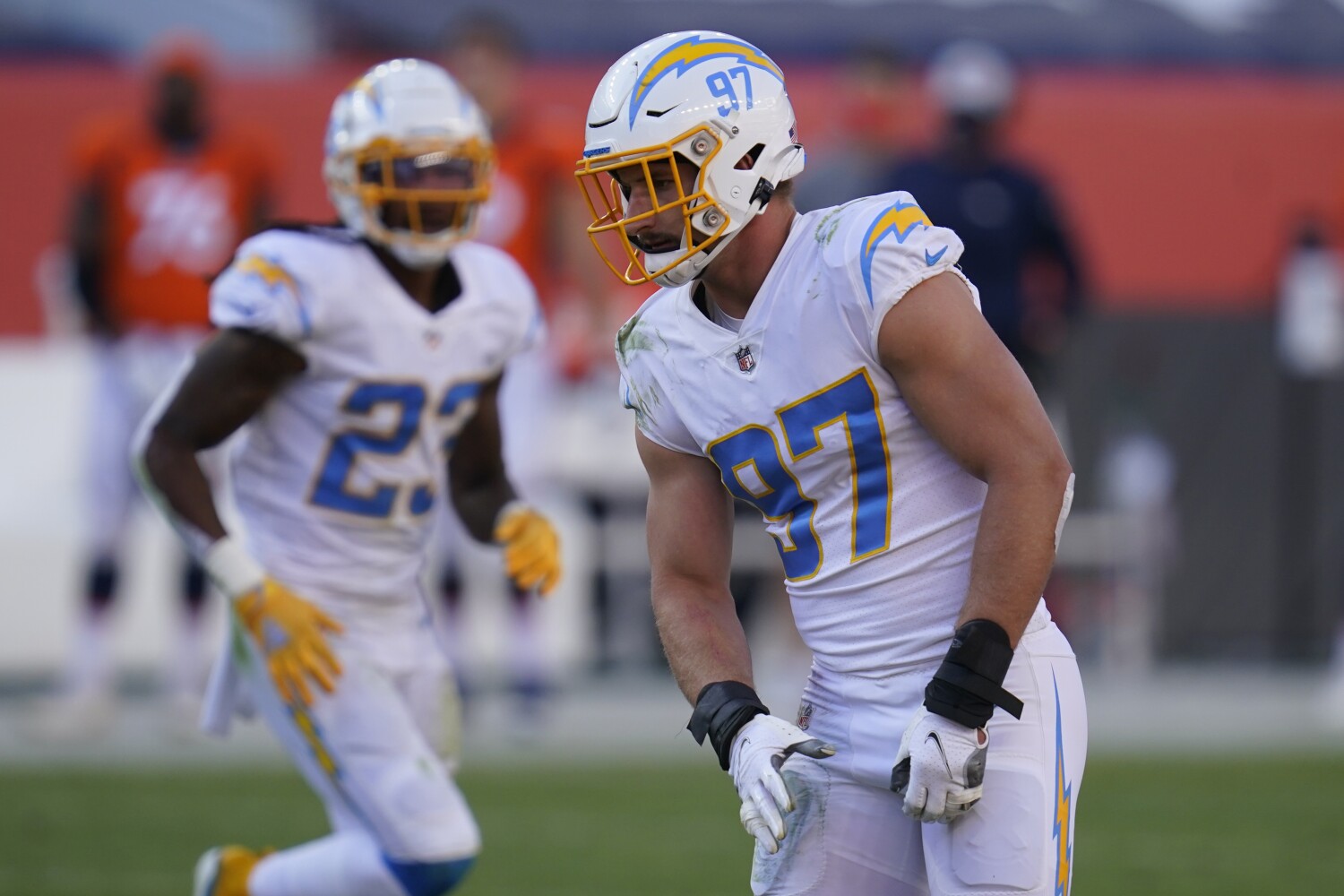 But for the second consecutive Sunday, he will watch his teammates in street clothes instead of joining them in pads.

The Chargers announced Bosa will be unavailable for the team’s road game against the Miami Dolphins. Bosa, a two-time Pro Bowl selection and the team leader in sacks (4.5), is still in concussion protocol after exiting the game against the Denver Broncos on Nov. 1. Bosa had been a limited participant in practice Wednesday and Thursday.

The Las Vegas Raiders exploited Bosa’s absence last week. Both rushing touchdowns they scored came from outside runs of 14 and 21 yards.

Second-year defensive lineman Jerry Tillery, who normally aligns in a “three technique” on the inside, replaced Bosa, and coach Anthony Lynn said he will again Sunday. Defensive end Isaac Rochell will play at that position too, Lynn said. He is hopeful the two will stop outside runs better against the Dolphins.

“We have to do a better job of setting the edge, period,” Lynn said.

Defensive coordinator Gus Bradley said Tillery had some “growing pains” last week. Tillery forced a fumble on a strip sack against quarterback Derek Carr and was disruptive on other plays, even if the box score didn’t reflect it, Bradley said.

“We thought by him playing on the outside, then maybe he can do some things with his rush,” Bradley said. “He’s playing pretty well for us right now, and to have a guy with that versatility when Joey is out to move him around, he did a pretty good job there.”

Bosa’s loss puts added pressure on a defensive line struggling to contain mobile quarterbacks. Dolphins quarterback Tua Tagovailoa has shown he’s capable of extending plays with his mobility. Bradley said the rookie has been doing a good job of scrambling while keeping his eyes downfield. It will be important for the defensive line to stay disciplined in its rush lanes and “limit explosive plays,” Bradley said.

Tight end Hunter Henry is on track to break his career highs in targets, receptions and yards. Against the Dolphins, though, blocking will be one of his biggest points of emphasis.

The Dolphins defense is aggressive, sending pressure without safety help, a football term known as a “zero blitz.” They used the scheme effectively against the Rams, flustering quarterback Jared Goff and forcing two interceptions, two fumbles and seven quarterback hits.

Henry said he’s proud of his production this season. Through eight games, he ranks second on the team in catches (33) and targets (53), and ranks third in receiving yards (357). This week presents an opportunity to show his blocking skills.

The Chargers’ battered offensive line might have two of its starters return this week. The team listed right guard Trai Turner as questionable on its injury report, and he was a full participant in both Thursday and Friday practices. Turner, acquired in the offseason in a trade with the Carolina Panthers, has only played one game this season because of a groin injury. Lynn said Turner’s workload slowly increased over the week, and his status for the game is fluid.

His partner on the right side, tackle Bryan Bulaga, is also listed as questionable and was a full participant at Friday’s practice. Bulaga missed four games this season because of a back injury, then returned against the Broncos. But he reaggravated his injury against the Raiders and left the game in the first offensive series. Lynn said it is possible both will be available, but he will be cautious with them.