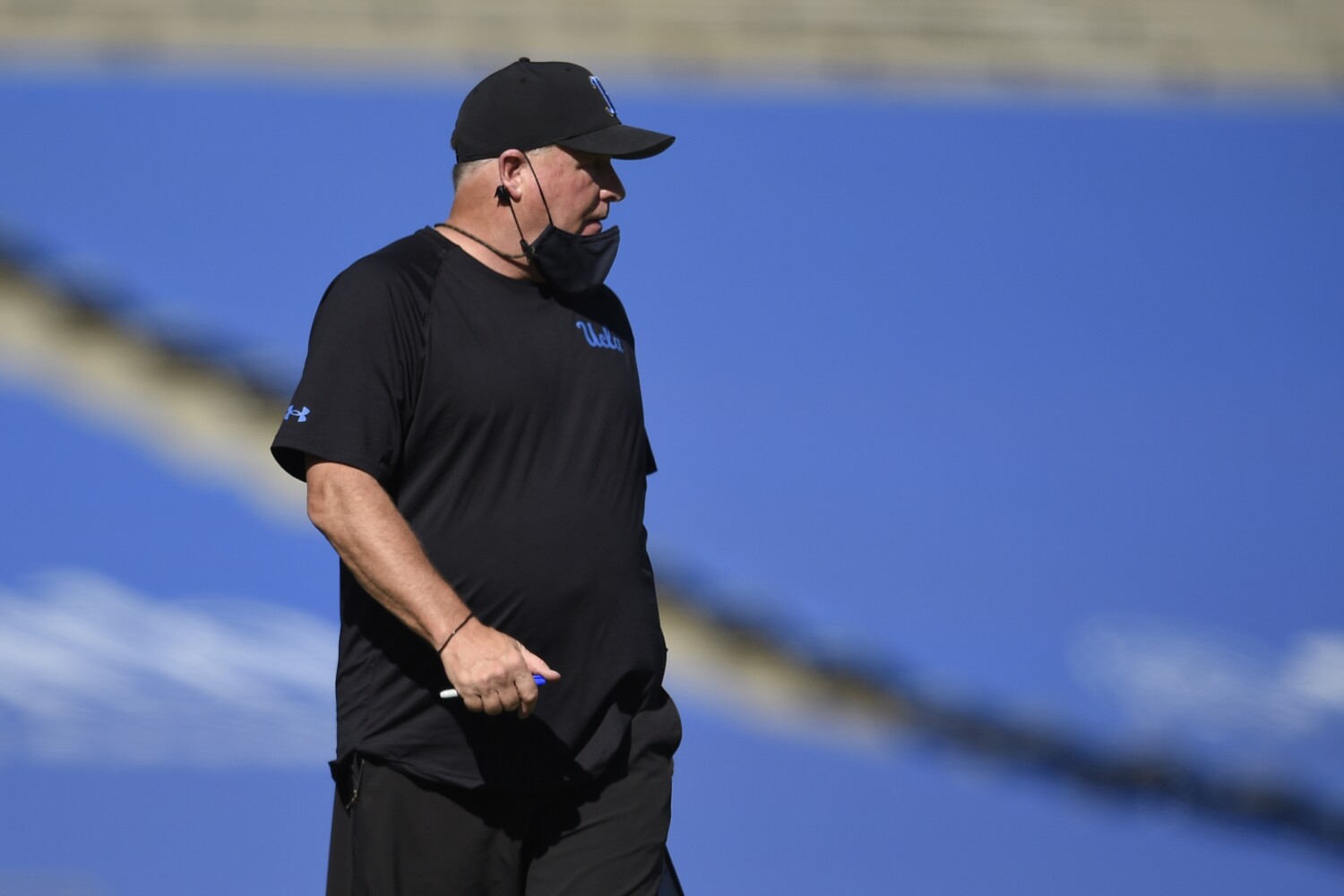 Two years ago, Chip Kelly received a standing ovation in his return to Oregon.

On Saturday, he’ll be greeted by 2,000 cutouts of fans, dogs of fans and Ducks in the NFL.

To say it won’t be the same when Kelly walks out onto the field at Autzen Stadium is like saying his success at UCLA hasn’t matched his success at Oregon.

Oregon is known as a madhouse, the campus where “Animal House” was filmed, which the Ducks like to remind everyone with video montages featuring the movie during breaks in football and basketball games.

The atmosphere will be decidedly more housebroken this weekend when the Bruins (1-1) face the No. 11 Ducks (2-0) in an empty stadium, assuming the game isn’t wiped out by COVID-19 issues.

“I don’t even think we’re going to have the Duck,” Kelly said Wednesday, “and that’s always depressing because he’s always fun to see.”

Oregon’s mascot sped onto the field atop a motorcycle before the game when these teams met in November 2018, leading players charging toward the sideline through billowing smoke. The game was a duckwalk for Oregon, a 42-21 victory that showed just how far Kelly needed to go in his rebuilding efforts with the Bruins.

It remains an ongoing process, Kelly’s 8-18 record at UCLA feeling like an early inverse of the 46-7 mark he posted in four seasons with the Ducks. He’ll forever remain a beloved figure in Eugene given the success he enjoyed there, taking Oregon to four major bowl games and the Bowl Championship Series national title game after the 2010 season.

As the UCLA and Oregon captains gathered at midfield for the coin toss two years ago, the public-address announcer said, “Please put your hands together and welcome back former Oregon coach Chip Kelly!”

A fan who shot a video of the sequence from one corner of the end zone yelled, “Chip! Chip! Chip!”

There will be only silence on Saturday, except for some piped-in crowd noise. Kelly said the fans were part of what made coaching at Oregon special and lamented that he wouldn’t be able to hear them.

“It’ll be different, for sure,” said UCLA wide receiver Chase Cota, a native of Medford, Ore. “Growing up, going to games, I was used to it being real loud there. And freshman year [in 2018] we got to go there, and it was really loud. But our first two games, they had over the intercom the fake crowd white noise going. Hopefully, we’ll get that again. We’ll be able to bring our own energy and vibe off of that.”

Kelly said he was in favor of Pac-12 teams being allowed to play nonconference opponents if their conference games were canceled because of the novel coronavirus, with one caveat.

“If they had the same testing protocols [as Pac-12 teams], then I would be for that,” Kelly said. “As long as it’s a safe environment, that’s what the overriding factor should be.”

The San Jose Mercury News reported Wednesday that Pac-12 athletic directors had cleared the way for nonconference games to take place this season, pending approval from their university presidents and chancellors. The move would allow Pac-12 teams left dangling because of game cancellations to fill their schedules instead of sitting idle.

The Pac-12 has canceled five games through the season’s first three weeks. UCLA switched to playing California last weekend after the Bruins’ originally scheduled game against Utah had been canceled, but there have been scenarios in which Pac-12 teams haven’t found a conference opponent on short notice.

Colorado coach Karl Dorrell told reporters his team remained open to playing this weekend after its scheduled game against Arizona State was canceled because of a viral outbreak on the Sun Devils.

A UCLA spokesperson said the football player who was out for the team’s first two games after testing positive for COVID-19 was available to play this week. … Kelly said nickelback Shea Pitts and defensive back Rayshad Williams had been “unavailable” against Cal but would not specify a reason. … Kelly, on the Oregon game time not being announced as of Wednesday morning: “It’s like getting cable. We were told we were going to have a game sometime between 12 and 7:30.” The coach said the Pac-12’s television partners were trying to find a window for the game after it had been moved from its original time slot on Friday night.