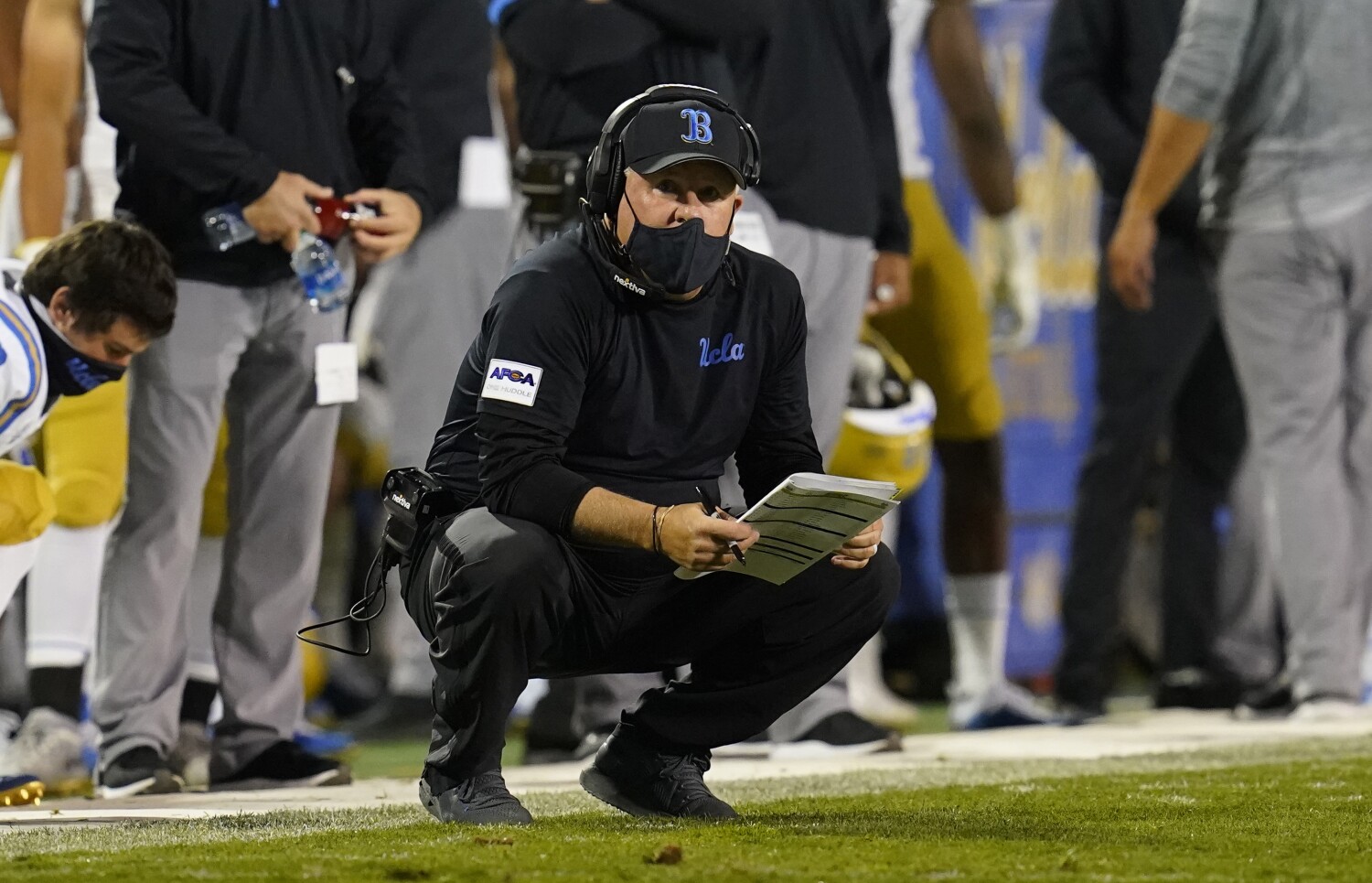 It’s an expensive process, whatever it is that Chip Kelly is doing with the UCLA football team.

By the end of this season, the Bruins coach will have made at least $11.1 million in salary from the school. He’s compiled a 7-18 record through the opening week of his third season, meaning that each win has cost UCLA roughly $1.59 million.

That’s not the return on investment the Bruins sought when they signed Kelly to a school-record $23.3-million contract largely based off his 47-7 record at Oregon, which seems especially stupefying considering what has transpired at UCLA.

Kelly said earlier this week that “our whole focus here has never been on the outcome, it’s about the process,” raising all sorts of questions: What is his process? Does he need to consider altering that process if it’s not yielding wins consistently by Year 3? Is he saying he’s not paid to win games?

But what happens when you get into Year 3 and the process hasn’t resulted in the desired outcome?

“Well, again, we’re focused on Wednesday,” Kelly said. “We’re in the micro world — I know we’ve gone back and forth about this the whole time, but our focus is on Wednesday.”

Don’t you reach a point where you have to question the process?

“I think we always question the process,” Kelly said. “Every single day, we’re trying to tweak things and [decide] what is the best way to do things. And that’s what the focus is. The focus is on the process.”

If the Bruins are unable to pull out of their tailspin under Kelly, new UCLA athletic director Martin Jarmond will have to decide whether to end that process. It won’t be solely up to Jarmond, of course, the school’s administration also having to sign off on the $9-million buyout Kelly is owed through Jan. 15, 2022, unless the sides are able to negotiate a settlement.

UCLA’s athletic department is massively in debt and the months-long shutdown of college sports only figures to exacerbate the bottom line, potentially complicating any movement to part ways with Kelly. That is, unless the bottom line becomes winning.

Prepping for the unknown

About the only thing UCLA will know for certain if it plays Utah on Saturday night at the Rose Bowl in a game imperiled by the novel coronavirus is that the Utes must have 11 players on the field.

The makeup of those players remained unknown after Utes coach Kyle Whittingham revealed earlier this week that scout-team players had moved up to the first team and walk-ons were preparing to play after his roster had been ravaged by the coronavirus.

Kelly intimated that he expected Utah to feature something resembling its regular lineup given that the two-deep depth chart released this week was the same as the one distributed before its game against Arizona that ultimately was canceled because of player shortage.

“I think when you get into the minutiae of that,” Kelly said, “they don’t have that many people out that has been reported.”

The challenge of preparing for the Utes is amplified by the lack of 2020 game footage. Kelly said he had watched film from last year’s Utah games as well as footage of graduate transfer quarterback Jake Bentley from when he played at South Carolina.

“You can kind of get a feel for what he’s like and what his talent level’s like and what type of quarterback he is,” Kelly said of Bentley, “but you also have to be aware of, it’s the Utah coaching staff that’s going to implement the game plan for him.”

Kelly, when asked about reports that Dodgers outfielder Mookie Betts had purchased his Encino home, complete with a fire pit in the backyard pool, for $7.6 million: “No reaction.”