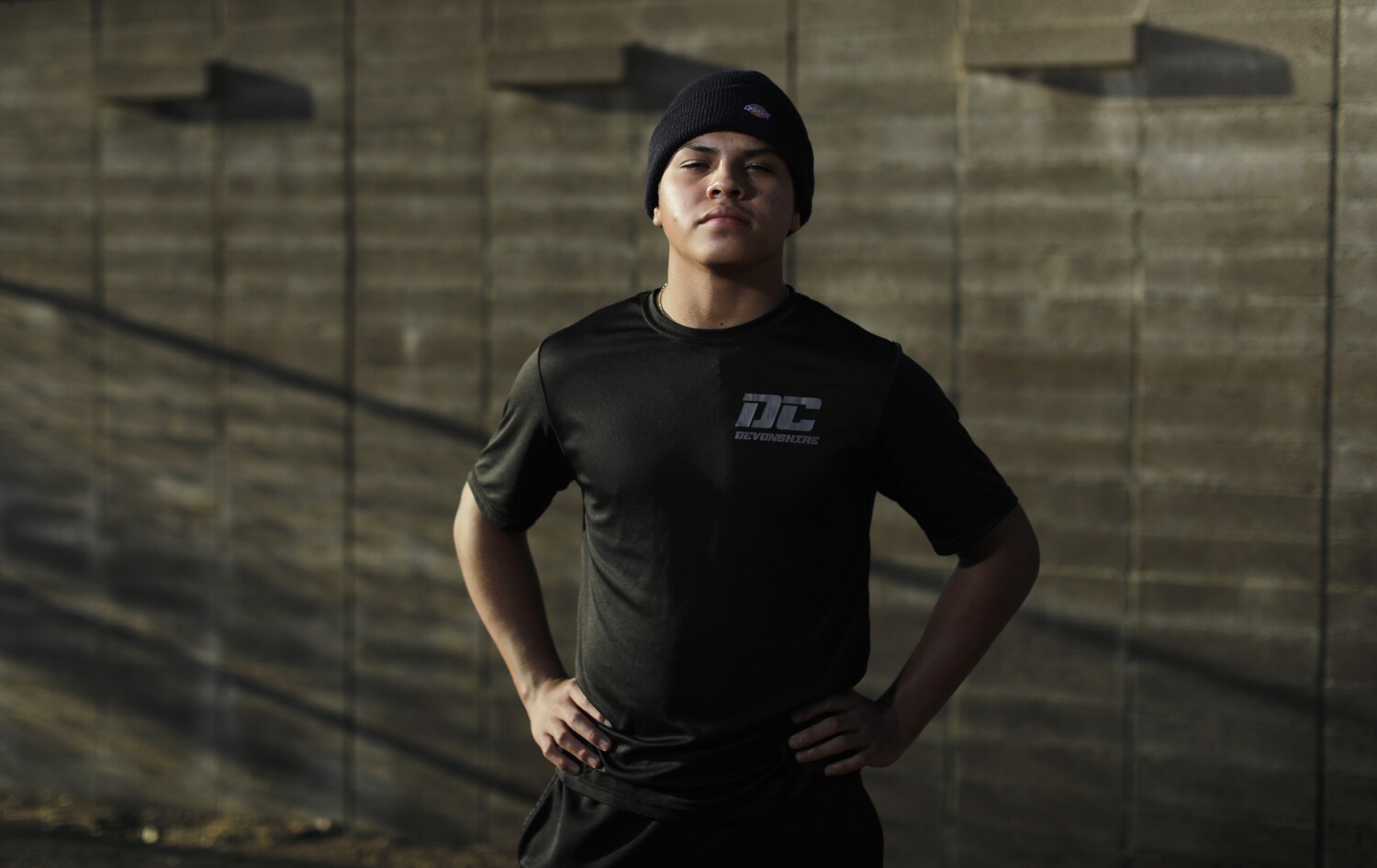 From the third-floor balcony of a one-bedroom apartment in Winnetka, 16-year-old Chris Giron attracted the attention of neighbors during the summer when they’d look up to see the Woodland Hills Taft High senior in his Nike tank top lifting milk containers filled with eight pounds of water.

“People pass with smiles,” he said.

Entering the ninth month of COVID-19 sports restrictions, Giron continues to prepare for the day someone will let him and his teammates play football again.

“I gained 25 pounds of muscle over the past eight months,” he said. “I couldn’t go anywhere, so I decided it’s probably a good idea to work out. I started to do push-ups and sit-ups.”

Then he got the idea of using the milk jugs as weights since he couldn’t afford to buy dumbbells (his coach eventually loaned him some). He lives with his mother, a housekeeper.

He has a 4.0 grade point average, rides the bus for transportation — “Buses are free now,” he said — and is nicknamed “Devil Dog” because he participated in a summer program when he was 14 at Camp Pendleton that left him thinking like a Marine.

“It taught me a lot of values and discipline to use in school and everyday life,” he said. “It taught me to work hard in difficult situations. It taught me to be tough and no matter what to give my all through whatever situation.”

When Giron, a 5-foot-9, 165-pound safety, is on the balcony doing his workouts on video calls with his classmates, he’s showing the kind of resiliency and determination that can be found among City Section athletes who refuse to be left behind.

“I’ve been working very hard for two years to be the best player I can be,” he said. “To be able to play means a lot. If we didn’t have a season, all that disappears. All my hard work might be in vain.”

Giron and others continue to work and wait for politicians, health officials and scientists to decide when it’s considered safe enough to resume competitions.

Giron played soccer until joining the football team last year. Taft went 0-9 and was down 77-0 in one game. He learned even more life lessons.

“I’ve played sports my whole life,” he said. “I was usually a winner on teams. I wanted to see what’s up with football. We went through a tough season, but I learned a lot. I used my mentality. You get 77 points scored on you, it feels terrible, but you have to keep playing and trying your best.”

On Monday, he returned to Taft for the first time since March. The Los Angeles Unified School District allowed voluntary conditioning workouts to take place as long as players and coaches were tested for COVID-19.

On-campus classes are unlikely to return until Jan. 11 at the earliest, which means more weeks of uncertainty for Giron because there won’t be any City Section sports without students in classrooms. Getting to work out with his friends is a step forward, but no one should forget how important it is for Giron and others to have the opportunity to compete in games.

Somehow, some way, there has to be a reward for those who have kept the faith, followed the rules and kept grinding in the face of a once-in-a-100-years pandemic.

“Just work hard and never give up,” Giron said. “College is very important to me and I can’t let it get me down. I have to keep powering through the tough times. That’s what my mom has always taught me.”

None of Angels’ finalists for GM has experience in the job