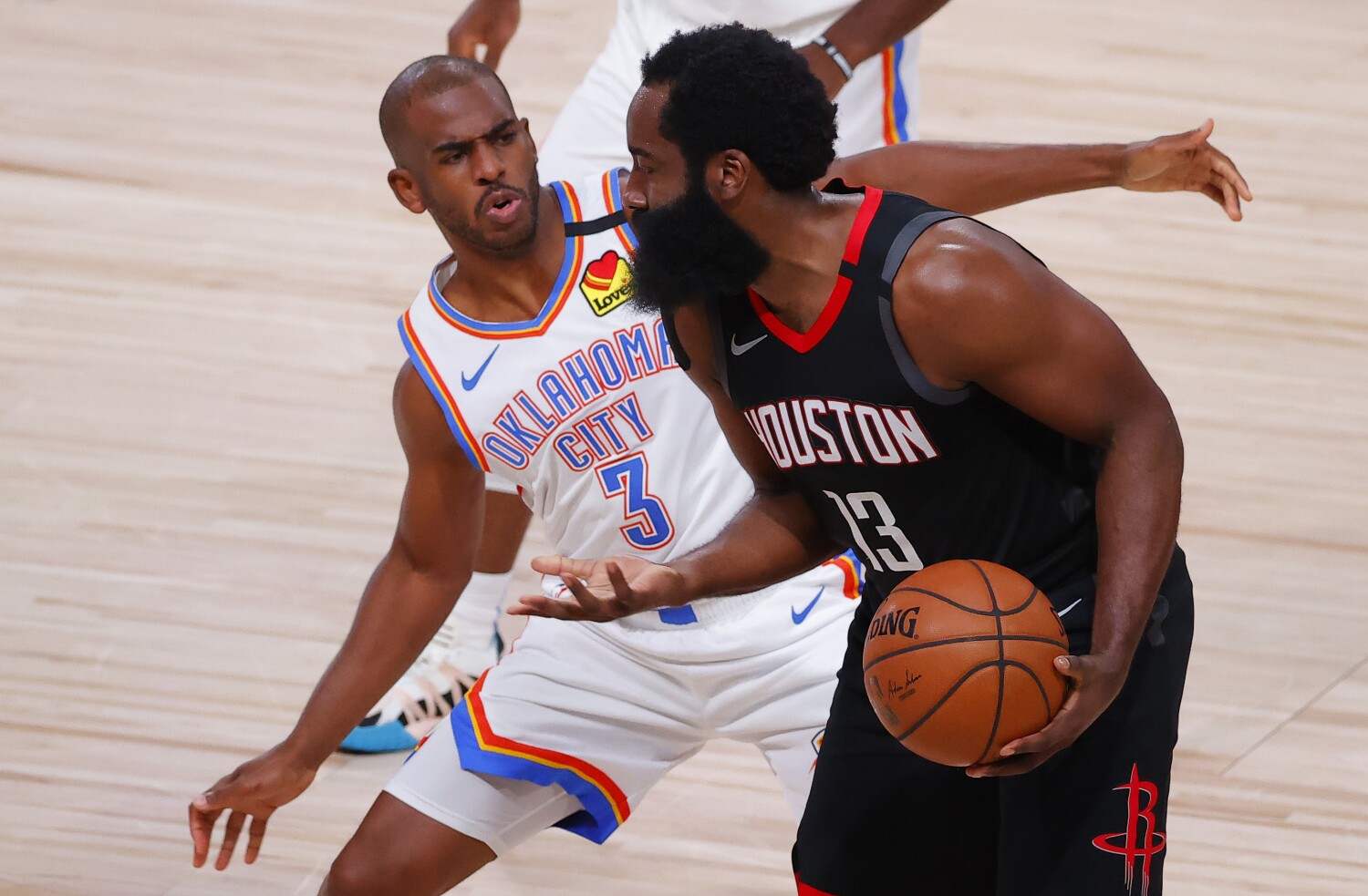 This last NBA season ended with LeBron James celebrating, spraying champagne on anyone near the Lakers locker-room door, Facetiming with his mother and chomping down on a lit cigar, smoke billowing while he bathed in his achievement.

The other big winner of the NBA’s bubble, Chris Paul, wasn’t there at the time. His Oklahoma City Thunder, like all Paul teams to date, were bounced before the Finals, this one falling in a tough first-round fight with the Houston Rockets.

Paul, the president of the players’ union, helped orchestrate the whole bubble operation, convincing his colleagues to sacrifice some personal freedom, to say goodbye to friends and families, and to reconvene in Florida during a pandemic to finish the season.

While he was there, Paul reminded the NBA about his value, helping carry the Thunder from the last gasps of the Kevin Durant-Russell Westbrook era smoothly into a new one that included a surprise trip to the playoffs.

It wasn’t a championship, but it undoubtedly was a success.

And Monday, without taking a step that much closer to an NBA championship, Paul managed to win again.

The Thunder traded Paul to Phoenix in a deal that returned four players, including Kelly Oubre and Ricky Rubio, and a future first-round pick, putting the veteran point guard in a better position to win — even if title contention is probably a stretch.

For Paul, it’ll be a chance to advance to the playoffs with a third team in three seasons and the fifth organization in his career, a sign of the nomadic nature of a modern NBA superstar.

They almost all change teams, it seems, and it appears Paul won’t even be the best player dealt this week.

Teams around the NBA believe Houston star James Harden is looking to leave, with Brooklyn among the organizations discussing an offer. And while the market for Westbrook hasn’t been filled with eager takers, the Rockets still might be able to move him.

In a move that actually might allow for a superstar to stay, sources said the Milwaukee Bucks acquired Jrue Holiday from New Orleans for a host of first-round draft picks and pick swaps on Monday night — a move that suggests Giannis Antetokounmpo will sign the huge contract extension to stay with the Bucks that awaits him.

It’s why the Bucks were willing to give up so many picks — when someone like Antetokounmpo wants to stay, you pay the cost to keep him happy.

But that’s an exception in this league at this moment.

Both the Lakers and Clippers are built around superstars who chose them instead of stars they groomed themselves. And while homegrown talent still can flourish — Boston and Denver being good examples — those teams really are just grooming players who can be matched in a potential deal once a top-tier player becomes available.

With the exception of his good friend James, no one has better navigated his own path in and out of organizations than Paul. He helped establish professional basketball in New Orleans, helped rebuild the Clippers into a credible organization, pushed the Rockets to the brink against Golden State, and served as a perfect bridge in Oklahoma City.

And executives around the NBA believe he’ll do it a fifth time with the Suns, joining Devin Booker, 7-foot center and former No. 1 pick Deandre Ayton and some interesting young players on the wing in Mikal Bridges and Cameron Johnson.

The Suns, who still own the No. 10 pick in the draft Wednesday, will need help to spell Paul, 35, but the sense is Phoenix will be “really good,” according to one rival executive.

While a lot of the praise Monday rightfully went to Thunder general manager Sam Presti, who managed to turn the trade requests from Paul George and Westbrook into a slew of draft picks and assets the team could flip, let’s take a minute to salute Paul.

Few players in recent history have been able to impact so many organizations the way he has, bringing with him an insane competitive streak born out of a lifetime of competition as a little brother who had to overcome his lack of size and physical shortcomings to quench his desires for winning.

The Suns might not be the ticket to Paul’s first NBA Finals — the road there in the short term is filled with too many other teams ready to win now — but Phoenix is undoubtedly better today than it was yesterday.

For the first time in a decade, the Suns are in position to matter — and that, in itself, is another win you can give to Chris Paul.

Rams rookie Jordan Fuller learned how to perform from mom