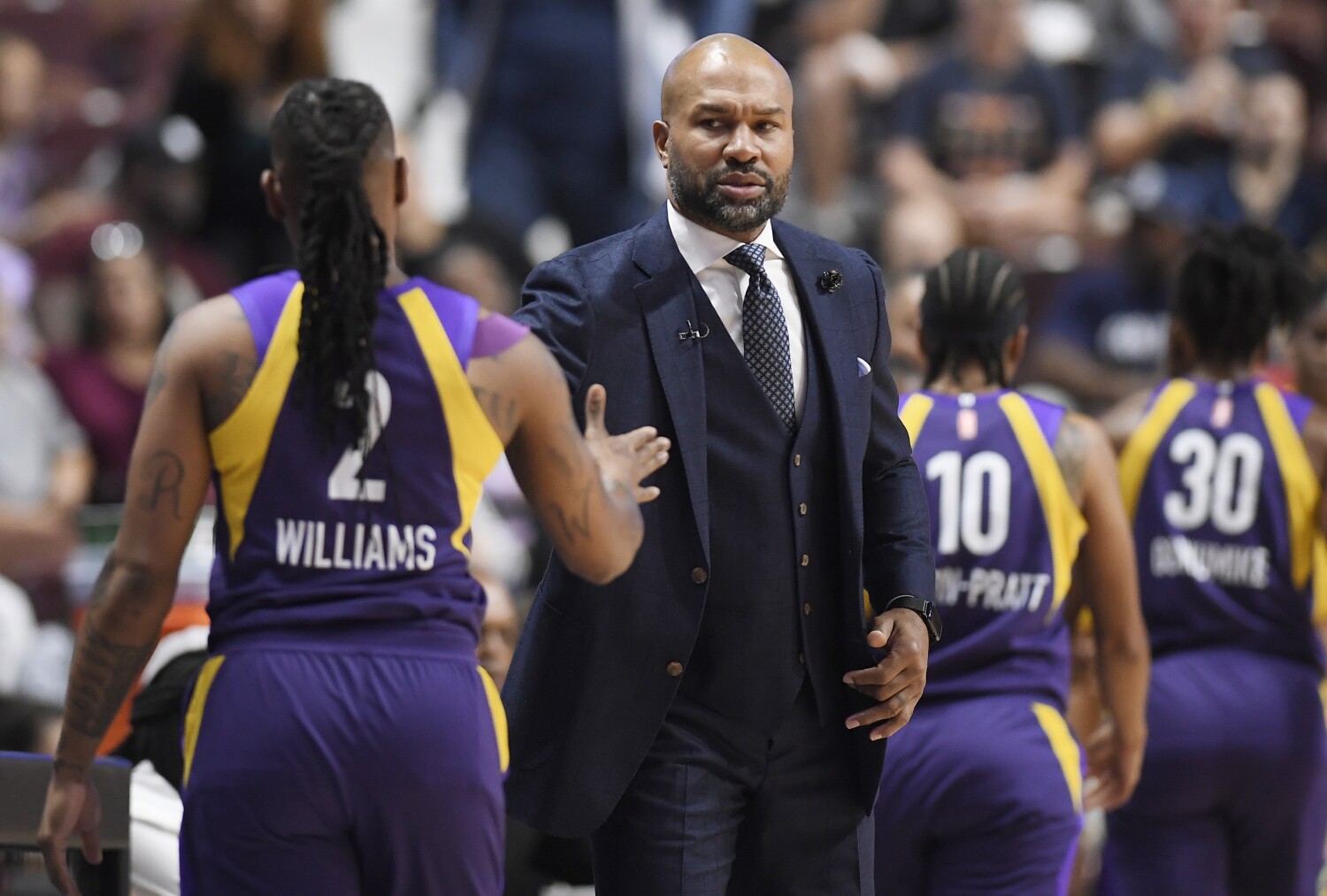 For Episode 3 of the Legends of Sport: Restarting the Clock podcast host Andy Bernstein spoke with Sparks coach Derek Fisher and former Lakers coach, and current Rockets coach, Mike D’Antoni. Excerpted here—and lightly edited for clarity and space— are parts of Bernstein’s conversation with Fisher, the former Lakers point guard who spoke about the shared responsibility the WNBA and NBA have in Orlando and the unique challenges and mission of the women’s league.

You can listen to the entire podcast with Fisher and D’Antoni here.

Derek Fisher: This is an adjustment for everyone involved here, but I have to give our players a ton of credit. We’re trying to really make sure that we don’t run them in the ground too much to start out, because they weren’t able to train and prepare themselves in a normal way. But we were able to pick up a couple of, I don’t want to call them replacement players, but players that were available to us when Kristi and Chiney opted out.

Te’a Cooper and Reshanda Gray they have been great with our group. This is not an easy set of circumstances but we represent something bigger than us and these women represent so much more.

Andy Bernstein: I’m fascinated by the fact that the difference between the NBA bubble and the WNBA bubble most distinctly is that the women players, the WNBA players who are moms, are able to bring their kids. I read something [recently] that Candace Parker talked very eloquently about: how important that was to her, to have her daughter with her.

Derek Fisher: Candace is the only mom on our team this season. We had Alana Beard last season and she’s a new mom, she gave birth at the halfway point of the season. League-wide, there’s not a large number, but obviously still very important to make sure that every support possible that can be provided for them, that they have it. They shouldn’t have to choose between professional success and motherhood.

Andy Bernstein: The Sparks organization and your players are deeply committed to using their platforms to give a voice to social justice and as well as voting, education, immigration reform. The team’s message this year is “Change has no offseason.” So how are you personally getting that word out?

Derek Fisher: Timing-wise, in terms of the initiatives that we’re working through now, for me it’s really about supporting our players and amplifying their platforms and sometimes that’s by me doing more on my platform to share what they’re doing.

But I have to grow in terms of doing more on my platform to point to what they are doing and what our organization is doing. So I’m challenging myself in that way. Recently, all 11 of the L.A. sports teams formed an alliance to continue to do things in the community. But voter registration, immigration, women’s rights, supporting the LGBTQ community, and some of the ways that they are underserved and underrepresented? These are all important conversations and a lot of our players are at the forefront of them and we have to support them in every way possible.

Derek Fisher: Not specifically the WNBA. But specifically our daughters, what life is like raising daughters. Those were conversations we had for years. You know, the amount of time that we spoke, honestly, our relationship evolved from the eight years that we played together.

The three years that we were apart—two years I was in Golden State, one in Utah—our relationship evolved from teammates, basketball, how do we win, what’s the next game to fatherhood, raising kids, you know. We spent a lot of time just talking about life from that perspective.

I had no idea the way he would impact the women’s game years later — I didn’t see that happening. Even though he was very clear about his love for his daughters and wanting to create a better world for them. But I think once Gigi kind of became a monster on the court, he was like ‘Alright, that’s where I want her to be eight or nine years from now so let me get to work now to make sure that that’s where it needs to be when she gets there.’ He wasn’t trying to have his daughter playing for 50 grand.