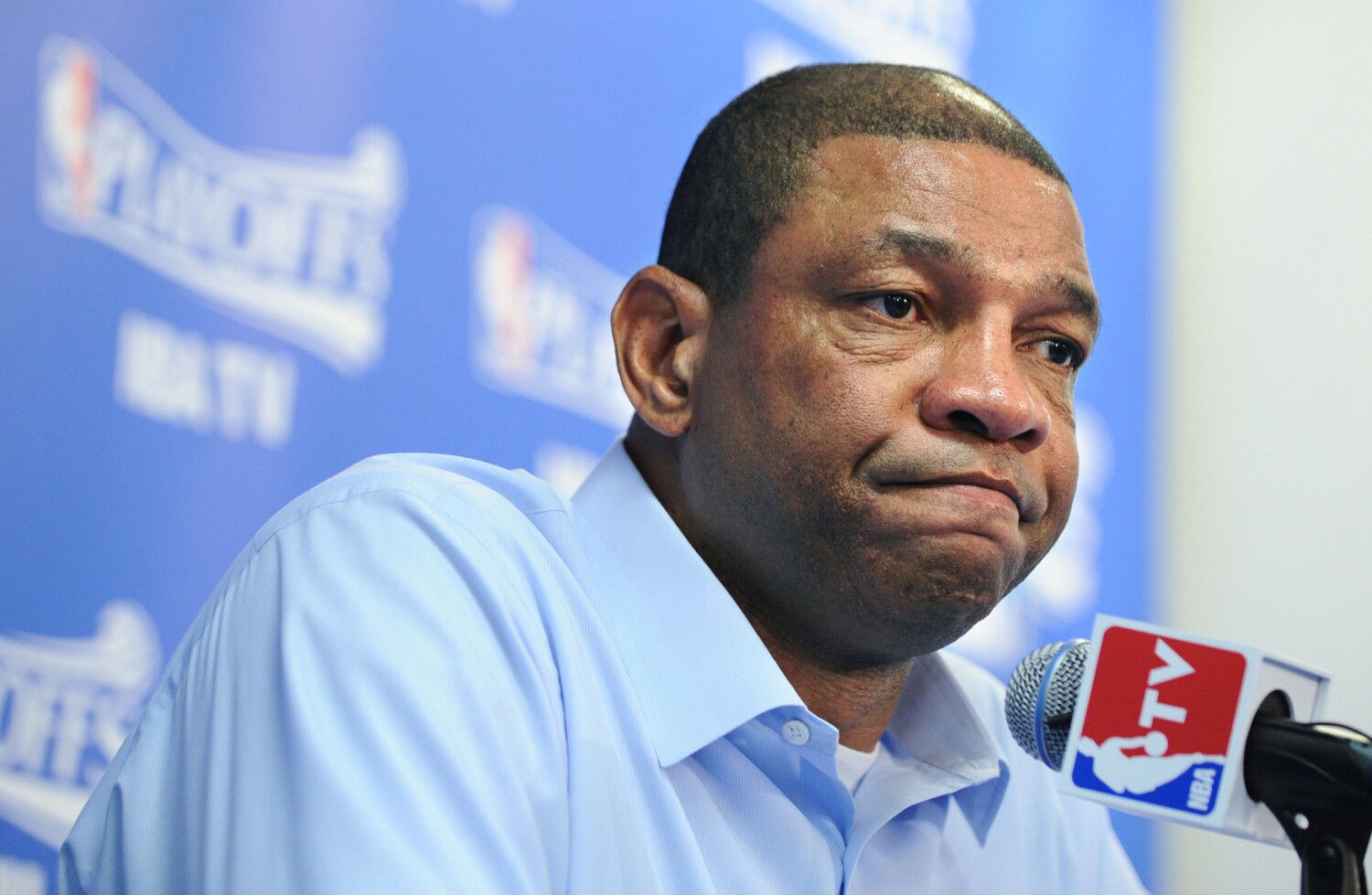 When Doc Rivers packs for Clippers road trips, he always brings a hat. At team shoot-arounds, it is rare to find the coach without one typically bearing the logo of one of his favorite golf courses.

Upon arriving in Orlando, Fla., for the NBA restart, Rivers had two new options in his bag. One was blue, the other black, but both have the same design stitched into their front — “VOTE” in capital letters.

If the hat was not on his head Thursday, before the team’s practice, its message was nonetheless on the coach’s mind.

“Voter suppression has been happening my entire life, and it’s been done by the same people to the same people,” Rivers said. “Now, you add the youth in because it used to just be the Black and brown, and now it’s Black, brown and young. So, on one end we have voter suppression, and then on the other end we all of a sudden have this mail problem, which has never been a problem.

“You know there’s four states that do mail-in-only voting and they’ve done it for years and they’ve had no problems. It’s something that someone, and I’m just going to say it that way, wants us to believe that’s not there .”

The comments came hours after President Trump said he opposes the emergency funding for the U.S. Postal Service that has been pushed by Democrats. Trump told Fox Business Network he wants to block the funding because “they need that money in order to make the Post Office work so it can take all of these millions and millions of ballots.”

It was not the first time that Rivers, long an outspoken advocate for voting rights and critic of Trump, took aim at both since arriving for the NBA restart. After Trump said NBA players were “disgraceful” for kneeling during the national anthem, Rivers responded on Aug. 5 that “justice is on our side.”

“And this hat that I’m wearing,” said Rivers, donning his “VOTE” hat, “is what our president is trying to get us to not do, which I think is just as disgraceful.”

The Clippers have backed Rivers’ messaging on voting. The Atlanta Hawks, Golden State Warriors and Clippers on Thursday announced a partnership to increase voter registration through a three-team competition. The Clippers also have pledged to donate all of the proceeds from sales of its “Voters Win” apparel collection to a nonpartisan voting organization. The collection includes the “VOTE” hat that Rivers has donned so often while on the Disney World grounds.

“It’s definitely very relatable,” Morris said. “Doc is a unique coach. He’s been around a while, seen both sides, and the knowledge that he’s given us and the way that he stands in front of everyone and speaks his piece is definitely great for us as African-American males.”

Update: Patrick Beverley (strained left calf), Landry Shamet (strained left foot) and Montrezl Harrell (self-isolating) have been ruled out, according to the Clippers. Oklahoma City will play without guard Luguentz Dort (right knee sprain), Sixth Man finalist Dennis Schroder (self-isolating) and former Clipper guard Chris Paul (left hand sprain). With the Clippers locked into a first-round postseason matchup against seventh-seeded Dallas, and Oklahoma City set to face fourth-seeded Houston, neither team is expected to play its core contributors significant minutes. “I’m not sure how much guys will play, but just getting into that mindset that the playoffs are here,” Morris said of his approach to the final seeding game. “We know what we’re taking on. ”

How active will Dodgers be when hot stove league heats up?