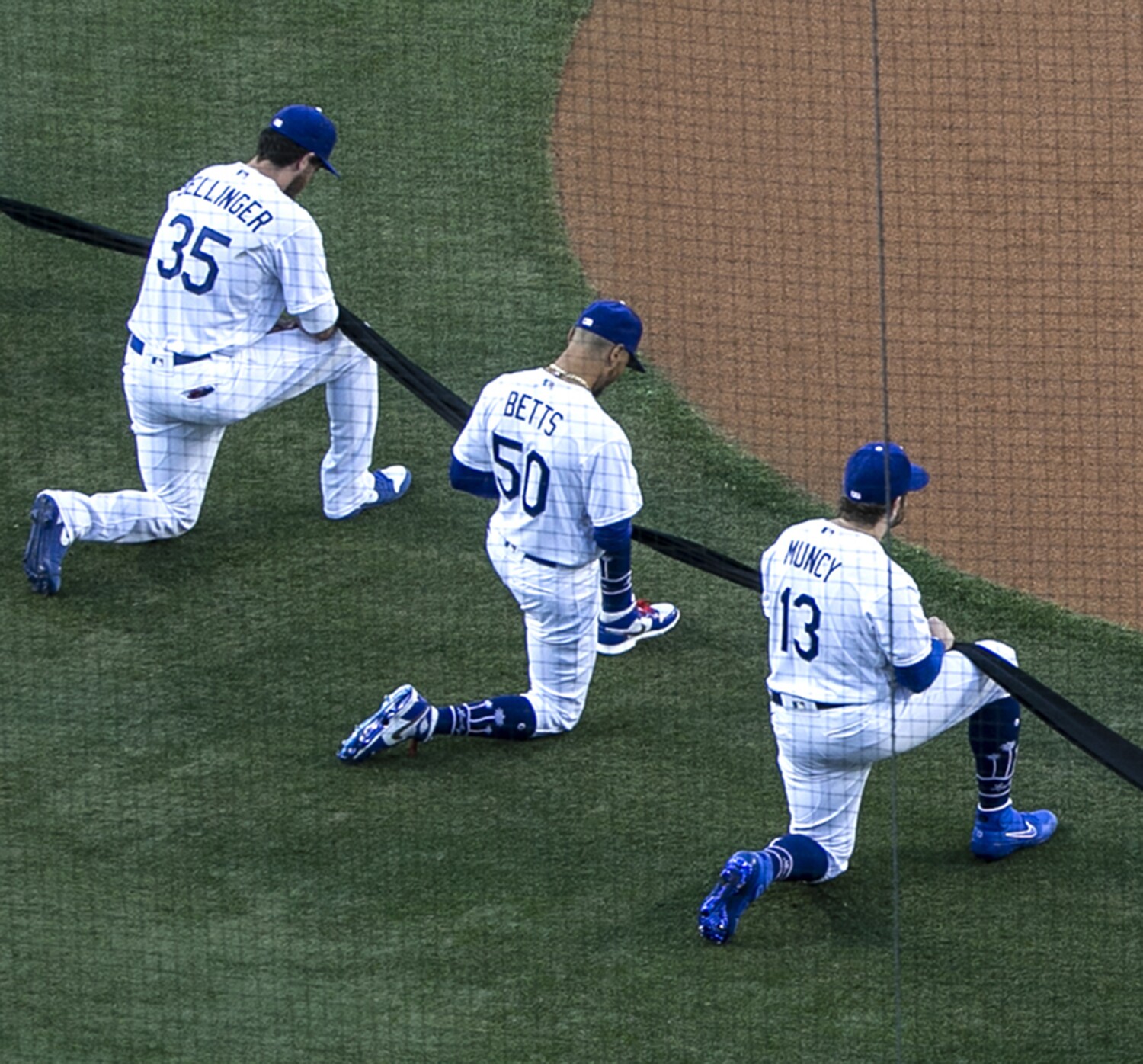 Mookie Betts kneeled during the national anthem before the Dodgers’ season opener against the San Francisco Giants on Thursday night, joining a growing number of players around baseball this week choosing to protest racial injustice and police brutality with the act.

In addition to Betts, San Francisco Giants manager Gabe Kapler and several of his players also knelt during “The Star-Spangled Banner,” which followed a pregame ceremony promoting social justice.

“I have talked to our guys about kneeling and for me it was more of individual choice,” Dodgers manager Dave Roberts said Thursday afternoon, wearing a Black Lives Matter T-shirt for a pregame video conference with reporters. “Collectively, we really haven’t settled on anything. But for me I just wanted to encourage each and every man to make their own decision.”

Before the anthem, players from the Dodgers and Giants joined in a pre-planned ceremony, kneeling while clutching a black ribbon that stretched down the first and third base lines. Roberts said the moment was conceived of by the Players Alliance, an organization of current and former Black major league and minor league players, including Betts. The Players Alliance also produced a video shown on the Dodger Stadium Jumbotron featuring current and former Black major leaguers.

The teams held the ribbon “in unity to support social justice and talk about racial injustice,” Roberts said.

Once the anthem started, Betts was the only player or coach on the Dodgers’ side to remain kneeling. Cody Bellinger and Max Muncy each placed a hand Betts’ shoulders. Betts, who signed a 12-year contract extension worth $365 million Wednesday, was critical this month of baseball’s response to the killing of George Floyd.

In 2017, Roberts, the son of a Marine, took issue with the idea of kneeling during the national anthem after then-Oakland Athletics catcher Bruce Maxwell followed San Francisco 49ers quarterback Colin Kaepernick’s lead. He said he “would have a problem” if a Dodger knelt during the anthem.

On Thursday, he said he has reversed that stance.

“I’m always trying to evolve and learn and be educated,” Roberts said. “I’ve realized that standing at attention, it’s not mutually exclusive to your thoughts on social justice and police brutality and things that Colin Kaepernick, Maxie, what he felt. As I’ve learned, I just believe that you’re not trying to disrespect the soldiers, men and women that serve our country and lay their lives on the line every single day, my father included. So yeah, I have evolved and changed.”

His players have also become more active in the wake of this summer’s nationwide protests over police brutality and social injustice.

Last week, a group of Dodgers launched an “In This Together” initiative to raise money for local charity organizations promoting social justice and have been in consultation with activists from the Liberty Hill Foundation about organizing in-person events once the pandemic ends.

Before the game, members of the team wore “Black Lives Matter” shirts on the field. Others wore sleeve patches promoting the cause on their game jerseys. On the back of the mound at Dodger Stadium, the letters “BLM” were written beneath an MLB logo.

UCLA basketball might find out how good it is in game No. 1