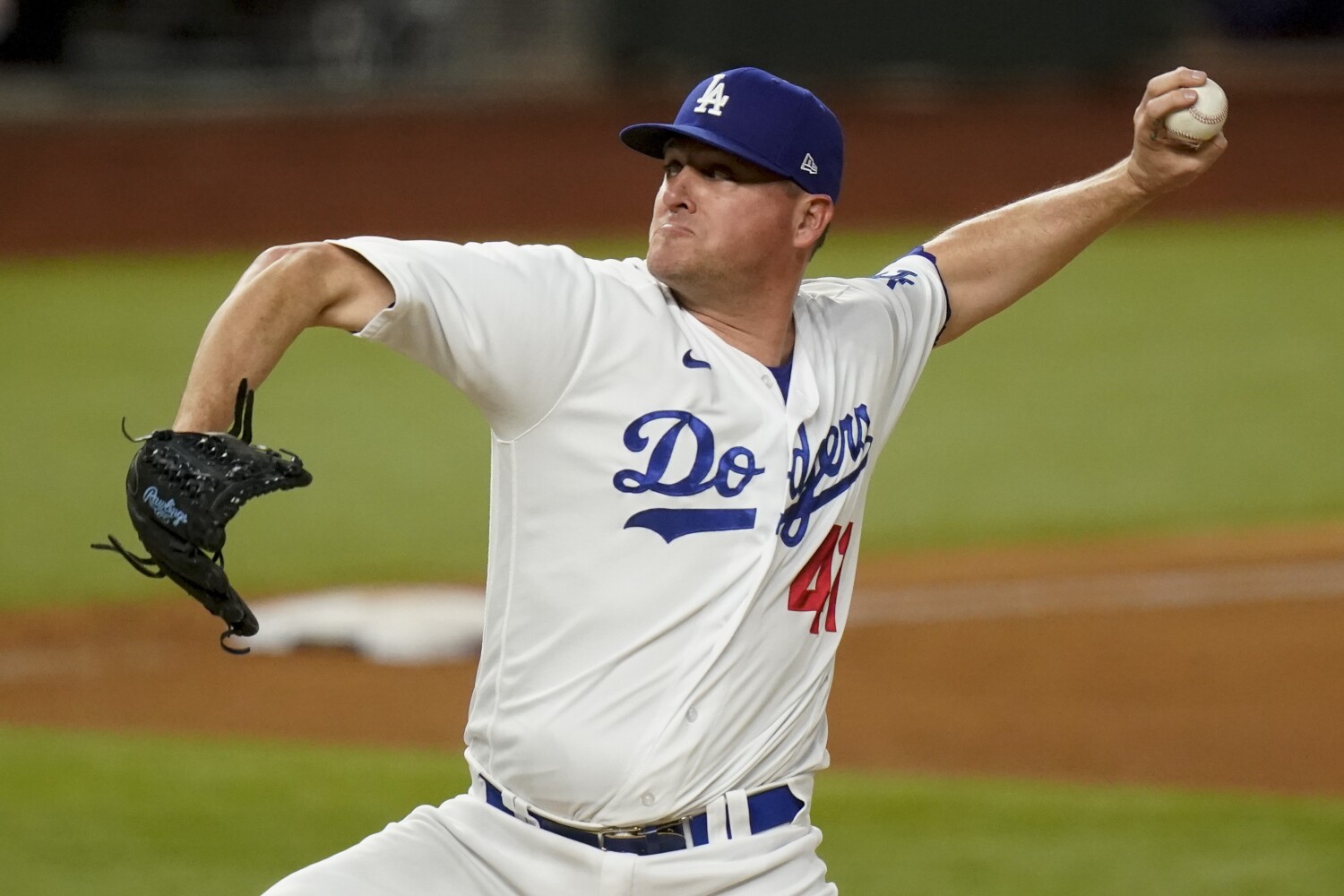 CASE FOR THE DODGERS KEEPING HIM: A full season of Dodgers analytics might complete his career revival, at a low free-agent cost.

CASE AGAINST: Victor Gonzalez emerged in September and, especially, October. He might be better than McGee, and he’ll get minimum wages.

This is the fourth in an occasional series examining the status of Dodgers’ free agents:

Every time he spoke with reporters over a video call this season, Jake McGee struck a grateful, optimistic tone.

He was thankful the Dodgers signed him in late July, days after he was released by the Colorado Rockies following four pedestrian seasons that made his early-career success with the Tampa Bay Rays feel like a distant dream.

He gained confidence from renewed effectiveness with his four-seam fastball, which fooled hitters with increased velocity and movement that he hadn’t generated in years.

He felt valuable too, becoming one of the key left-handers in the Dodgers’ bullpen, with a 2.66 ERA (his lowest since 2015) and a career-best 14.6 strikeouts-per-nine-innings.

“I thought there was a lot of upside to come over here,” he said during the regular season. “Just really comfortable and throwing my fastball a lot.”

At 34 and entering free agency this winter, it’s likely that McGee’s Dodgers tenure will end having lasted just the one pandemic-shortened season. However, his MLB career looks far from over. And when he arrived in Los Angeles in July, there was no guarantee that would be the case.

Having signed a lucrative three-year extension with the Rockies after the 2017 season, McGee posted a 5.54 ERA in 106 appearances between 2018 and 2019. He had given up more hits than strikeouts. His ERA+ was 89 (100 is considered average). Still owing the majority of his prorated $3.5-million salary for 2020, the Rockies decided to release him anyway, a week before opening day.

However, the Dodgers still saw potential in the 6-foot-4 fastball specialist. After signing McGee to a low-risk one-year deal, the team helped him revamp his delivery to maximize the natural movement and speed on his four-seamer.

The results were impressive.

Despite relying almost exclusively on the one pitch — of his 332 pitches, 320 were fastballs — McGee recorded a career-best 34.4% swing-and-miss rate and matched Kenley Jansen for most strikeouts by a Dodgers reliever in the regular season, 33. He walked three batters and gave up just two home runs. His 94.9-mph average velocity was his highest since 2017.

In the playoffs, McGee didn’t pitch until the National League Championship Series, giving up a home run in the ninth inning of the team’s series-opening loss to the Atlanta Braves. McGee appeared three more times after that — all with the Dodgers trailing late in games — and posted two total scoreless innings.

The Dodgers paid a 60-game prorated portion of the major league minimum of $563,500 for McGee last season, with the Rockies on the hook for the rest. McGee would cost more than that for 2021, but they could re-sign him to help compensate for the loss of left-hander Caleb Ferguson, who underwent reconstructive arm surgery in September and will probably miss most, if not all, of next season. However, rookie Victor González became the Dodgers’ preferred left-hander out of the bullpen during the postseason and sidearm southpaw Adam Kolarek will also be back after posting a sub-1.00 ERA.

The class of free-agent relief pitchers runs deep, so McGee and the team could go either way. But if this is the end of their relationship, it was a mutually beneficial partnership: The Dodgers got productive innings on the cheap. McGee rebuilt his reputation.

And everyone walked away with championship rings.

UCLA vs. Utah: How they match up