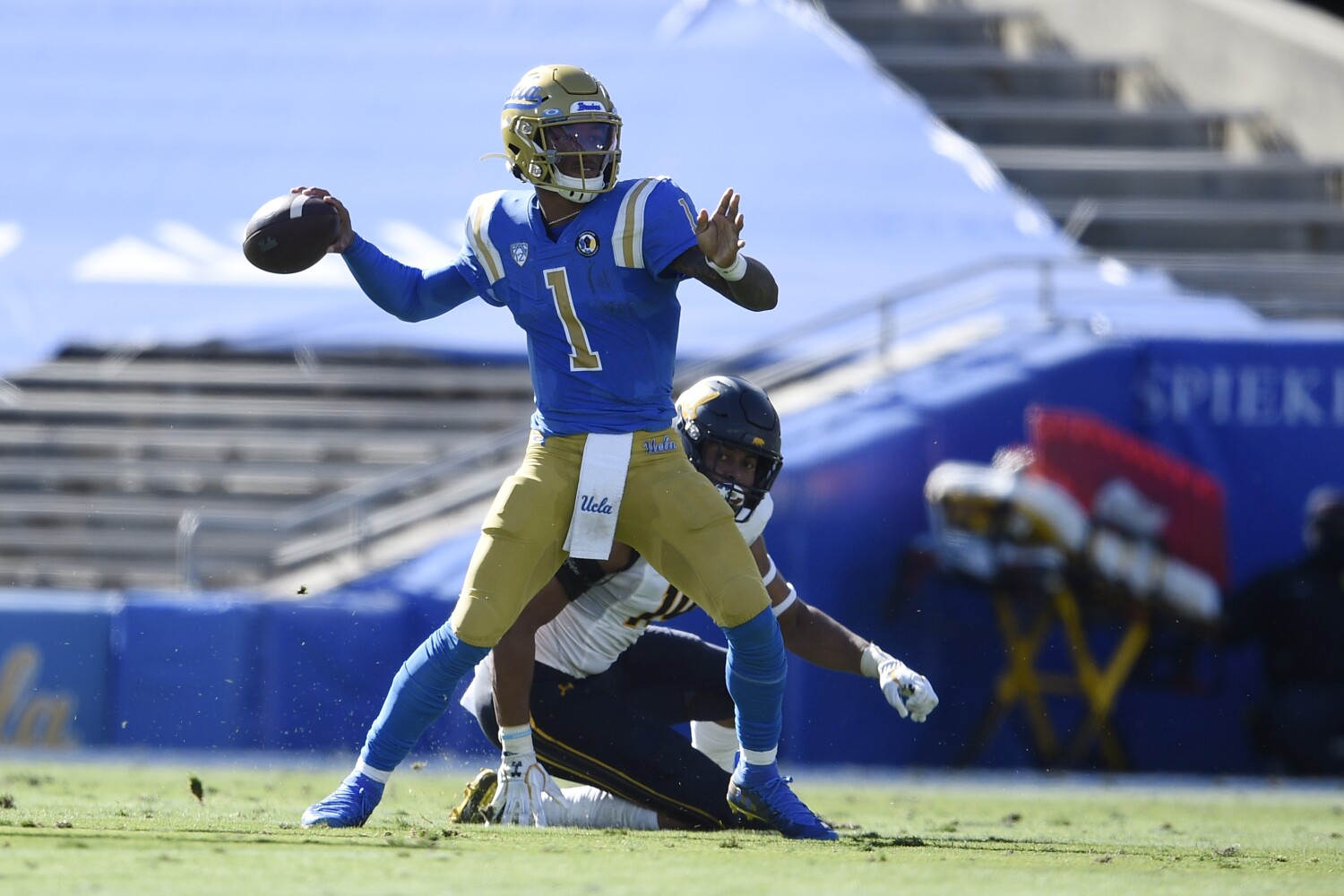 UCLA is expected to be without nine players, including starting quarterback Dorian Thompson-Robinson, for its game against against No. 11 Oregon on Saturday afternoon at Autzen Stadium because of issues related to COVID-19.

Among the other players who will be absent, according to a person close to the team who spoke on condition of anonymity because of the sensitivity of the situation, are running backs Kazmeir Allen, Keegan Jones and Martell Irby; receivers Jaylen Erwin and Delon Hurt; and linebacker Kain Medrano.

UCLA announced Friday evening that two players, coaches or staff within the football program had tested positive for the novel coronavirus. As part of safety protocols, anyone deemed to have been a close contact of someone who tested positive is placed into a 14-day quarantine, meaning that at least some of the Bruins held out against Oregon could also be sidelined for UCLA’s game against Arizona on Nov. 28 at the Rose Bowl.

I will not have the opportunity to play vs. Oregon today for reasons out of my control. Frustrated I can’t help the team but they will still be great regardless! #GoBruins

The absence of Thompson-Robinson likely thrusts redshirt freshman Chase Griffin into the starting role at quarterback. Griffin replaced Thompson-Robinson on the Bruins’ final drive of their 34-10 victory over California last weekend but mostly handed the ball off and has not thrown a pass at the college level.

Griffin was the Gatorade Texas high school player of the year in 2018 but was not heavily recruited by major college programs because he’s listed at 5-foot-11 and 184 pounds. UCLA’s other options at quarterback are Chase Artopoeus, a redshirt freshman walk-on, and redshirt sophomore Colson Yankoff, a one-time highly touted high school quarterback who switched to wide receiver during training camp in a bid for playing time with Thompson-Robinson entrenched as the starter.

Thompson-Robinson has completed 51.5% of his passes this season for 499 yards with seven touchdowns and two interceptions. He has also run for 161 yards and two touchdowns.

The loss of Allen, Jones and Irby will significantly deplete UCLA’s depth at running back, though Demetric Felton Jr. and Brittain Brown combined for 37 of the team’s 54 carries and 178 of its 244 rushing yards against Cal. Jones has 24 yards in five carries this season in addition to a 26-yard touchdown catch, and Allen has carried the ball twice for three yards. Irby has not played while rounding into form from a knee injury.

Erwin has made one catch for 22 yards this season and Hurt has not made a catch. Medrano has made one tackle, good for a three-yard loss, in the season opener against Colorado.