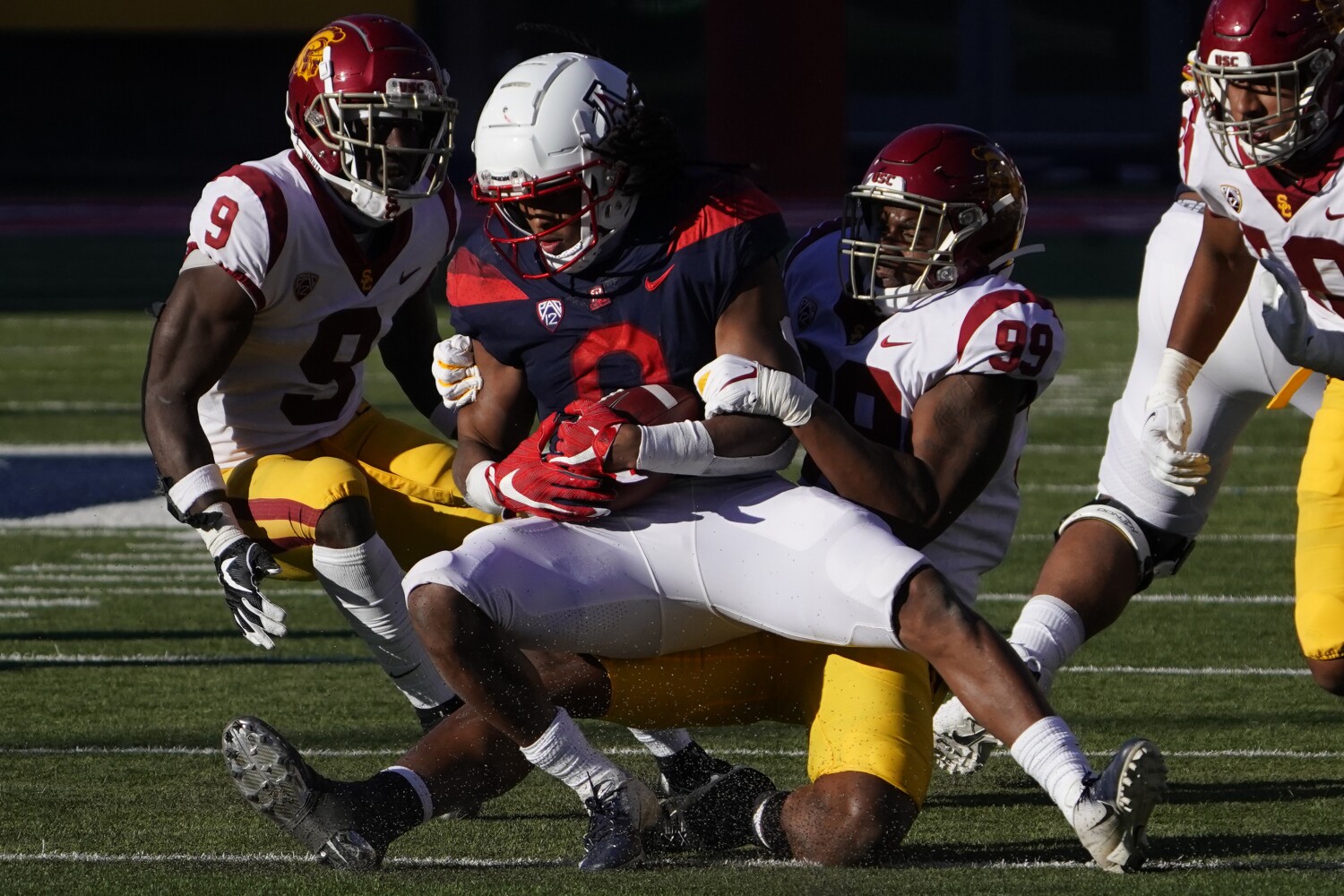 He’s 20 pounds lighter, quicker than he can ever remember, and in a role more suited to his eye-popping, All-American, pass-rushing potential. But it wasn’t until the second half of USC’s second game last Saturday that Drake Jackson truly burst back onto the scene as a sophomore.

The ramp-up began on Arizona’s first offensive play of the second half
as Jackson disposed of an opposing lineman, then wrapped up a 220-pound running back, throwing him to the turf like a ragdoll. Two plays later, on third and six, Jackson spun around another unsuspecting lineman and flew full speed toward the quarterback, closing the gap in a hurry for a drive-ending sack.

The sequence was a sign of what Jackson could be capable of — and what the Trojans defense desperately needs him to be — in his second collegiate season.

He remains the hinge point of a defense otherwise lacking in pass-rush options. After Jackson, the Trojans’ returning leader in sacks from last season is Talanoa Hufanga (3.5), a safety. USC has produced a decent rush from the interiorthis season, thanks to two of the best performances of Marlon Tuipulotu’s career. But in a new scheme predicated on pressure, there’s no understating just how much USC’s defense is relying on Jackson to get after quarterbacks.

At two of the most crucial junctures of the Trojans’ two games thus far, Jackson did just that. Against Arizona State, his pressure forced an errant fourth-down throw from Jayden Daniels on the Sun Devils’ final drive. A week later, he sacked Arizona’s Grant Gunnell with three seconds left, closing out the game.

“He’s got really, really good vision,” USC defensive coordinator Todd Orlando said. “That’s probably the thing that good players have that’s not coachable. He can see everything, and he can adjust.”

After dealing with a strained hamstring through much of training camp, Jackson is still adjusting to USC’s rebuilt defense; though, he assures his role hasn’t changed all that much, outside of his presnap stance.

As more of a hybrid linebacker in Orlando’s 3-3-5 base scheme, Jackson no longer has his hand in the grass. He’ll sometimes be asked to drop into coverage.

“I would say they just let me play more rather than thinking about anything,” Jackson said. “I like that a lot more, just having me play free and letting me do what I do.”

It also can’t hurt that Jackson cut 20 pounds in the offseason, weight that Orlando believes slowed him down as a freshman. Jackson said he’s already noticed a difference in his quickness on the edge.

That speed was on display last Saturday as USC tallied four sacks at Arizona, compared to one the week before.

This week, at Utah, the Trojans won’t know what’s coming at the quarterback position. The Utes have yet to play this season and haven’t named a starting quarterback to succeed graduated passer Tyler Huntley, meaning USC will have to prepare for a trio of quarterbacks.

Whether it’s Jake Bentley, Drew Lisk or Cameron Rising under center for Utah, they all will be well aware of the threat Jackson poses off the edge.

Sophomore cornerback Chris Steele has long straddled the line between aggressive coverage and excessive contact. But over the first two weeks of this season, he’s crossed that line more than USC would like.

Steele has drawn four flags in coverage this season, accounting for nearly 30% of the team’s penalty yards through two games. Yet, neither coach Clay Helton nor Orlando have any plans to discuss that proclivity for penalties with Steele.

“I don’t want to take that aggressiveness away from him,” Helton said.

Added Orlando: “You just try to show him how things are going to be called. You want guys to be aggressive. It’s hard. If you get too much into a corner’s head and make him soft you’ll never get that back. … If all of a sudden we make Chris passive and he’s giving guys seven yards a cushion, it’s not going to matter because they’ll catch every ball. So don’t try to overcoach it.”