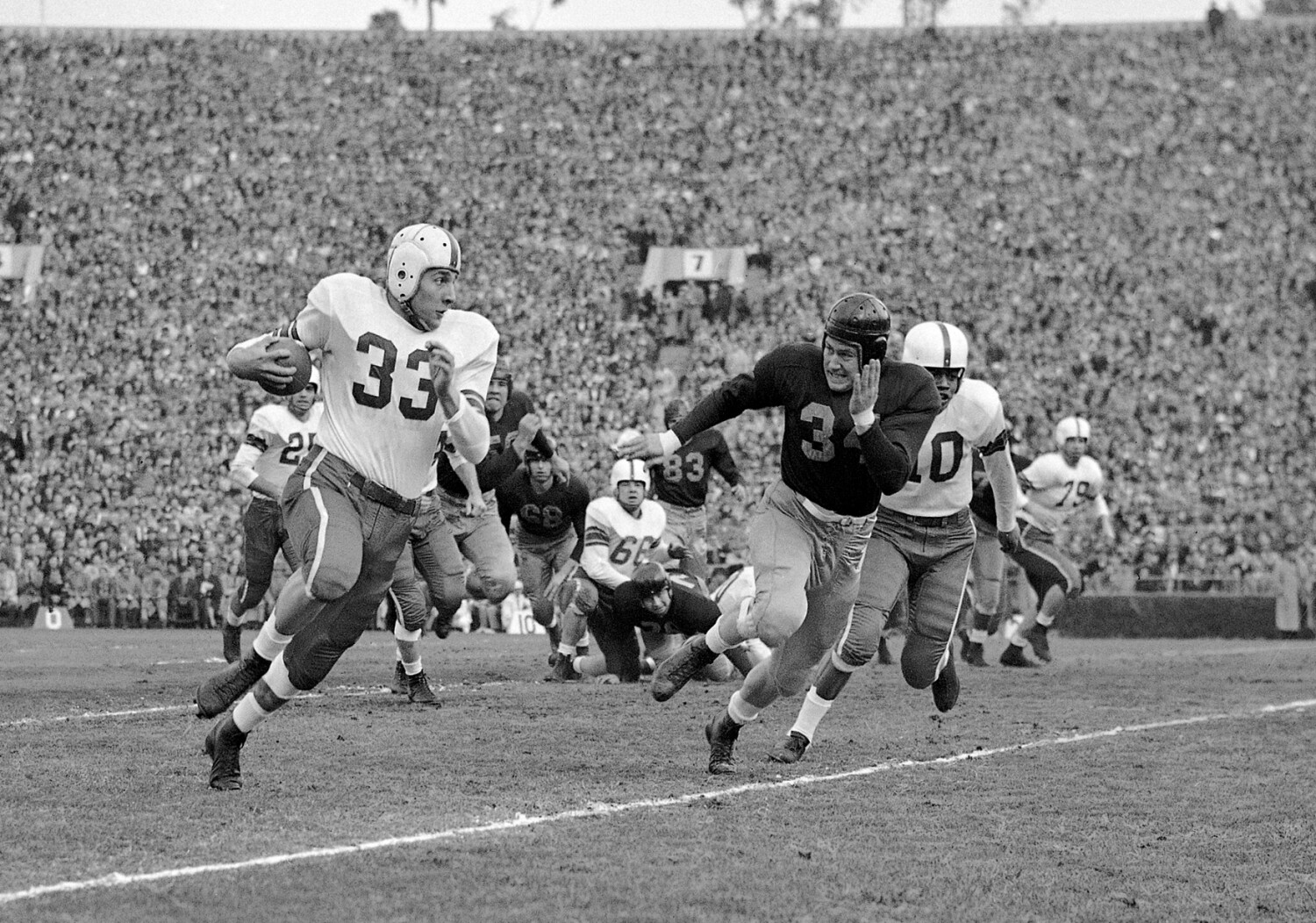 The team had just drafted Morrison 10th overall, but the $6,000 salary was not enough for Morrison and his wife, Sophie, who was pregnant. He needed a raise.

Halas agreed, giving Morrison an extra $1,000. But he deducted it after the season for equipment costs.

But Morrison adapted, and his play on the field led to opportunities off it. After retiring, Morrison started careers in media and as a sports executive. All the while, his love for his family and others led his decision making, those close to him said.

Morrison, a two-time NFL champion and the 1950 Rose Bowl most valuable player, died Sunday in Murrieta after developing complications from hip surgery six weeks ago. He was 94.

Born in central Ohio, Morrison quickly adopted the nickname “Curly” because of his hair’s appearance. After graduating from Upper Arlington High, Morrison served in the Marines before attending Ohio State. At the school, he soon met Sophie on a blind date, she said.

“He stood me up about two or three times,” said Sophie Morrison, his wife for 70 years.

He walked on to the team, originally playing tight end, but fought to become a fullback and received his wish.

He shined during his senior season on the biggest stage, rushing for 127 yards and a touchdown in the Buckeyes’ 17-14 win over California in the Rose Bowl and earning the game’s MVP award. He was inducted into the Ohio State Athletics Hall of Fame in 2010.

The Bears drafted Morrison in 1950, when he appeared in 12 games as a rookie and rushed for 252 yards and a touchdown. He was traded to the Cleveland Browns in 1954, a move that brought him closer to home. Sophie Morrison said her husband would spend off days in Columbus with the family before returning to Cleveland for work.

He saw limited action as the Browns won the NFL title in 1954, and followed up with his best pro season in 1955, rushing for 824 yards and three touchdowns to help the Browns repeat as champions while earning his only Pro Bowl nod. He played one more season, then retired, taking a job as commentator with CBS. In the 1960s, when CBS sold a package of NFL games to the Canadian Broadcasting Corp., Morrison would call NFL games for Canadian fans.

The family eventually settled in California. Dave Morrison, Fred and Sophie’s son, remembers his father taking him to practices when the Browns or the Bears traveled to Los Angeles. The conversations of how he molded his path after being a player stood out, Dave said. Though he didn’t pursue sports in college and instead became a businessman, Dave Morrison said his father always supported him.

“He never set expectations, never had any pressure,” Dave Morrison said. “He was just always really delighted in whatever I excelled in.”

Morrison later took executive roles with the Southern California Sun, a team in the World Football League, and the Los Angeles Express, a team in the United States Football League. Thirty years ago, he and Sophie Morrison established the Legends Invitational Golf Tournament at Pebble Beach Resorts, a fundraiser that has included appearances from former NFL players such as Jerry Rice.

“He lived a good life,” Sophie Morrison said of her husband. “We made a lot of good friends.”