Cheating is taboo in this game of absolute integrity, but it happens nonetheless. How prevalent is it and what should you look out for?

In the first round of the 1925 US Open, Bobby Jones was preparing to hit from the rough when he felt his club move the ball slightly. Although nobody had seen anything untoward, he called a penalty on himself. Praised for his sportsmanship after the round, he replied, “You might as well praise me for not robbing a bank.”

This story encapsulates the absolute importance of integrity in golf. Knowingly breaking the rules, or keeping quiet about rules infractions, is simply not acceptable in this sport.

Ours is such an expansive and largely unmonitored game that it falls upon individuals to be utterly honest with themselves and thereby their fellow golfers in order to retain a level playing field on which we all compete, in line with the same rules, in the same spirit.

But, as in pretty much every facet of human life, there will be those prepared to bend or break the rules to gain an advantage. There are always suggestions of cheating throughout the game, from the elite right down to the grassroots level.

The fact that, in the main, these are just suggestions indicates that instances of cheating are really quite uncommon. Most of us have heard stories, but how prevalent is it really? 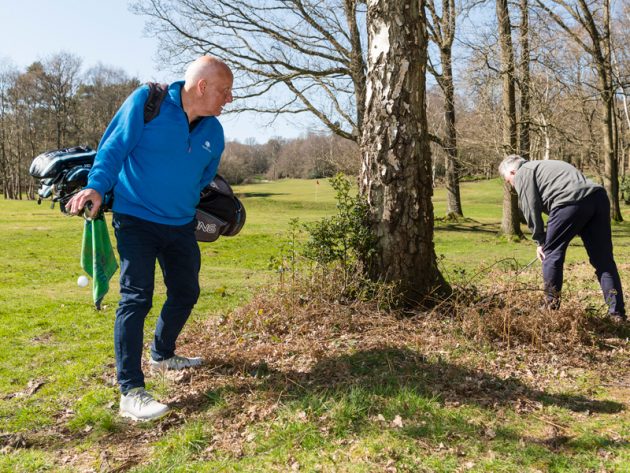 A variation on the classic ‘trouser leg’ (Credit: Tom Miles)

Over the years, in amateur and professional golf, only a very few cases of ‘cheating’ have been taken to their ultimate conclusion, resulting in significant action being taken. With 60 million golfers around the planet and only a handful of convicted ‘cheaters’ in the history of the game, we could surely say that cheating was pretty rare.

But how many cases go unreported? With integrity sitting at the heart of golf, an accusation of cheating could be ruinous for an individual, even if proven to be false. It could not only affect their position within the game, but it could also be harmful to their professional and personal life.

For this reason, calling an individual up on a rules infraction is extremely challenging and emotive. To do so there must be absolute certainty of foul play.

In most instances of suspected ‘cheating’ at an amateur level, there will likely be efforts made to afford the individual an opportunity to defend themselves before more public accusations are made.

If a friend or acquaintance appears to do something untoward, one might feel able to challenge them and question their actions. Perhaps they have misunderstood a rule, or perhaps they’ve just had a moment of madness that a quiet word would prevent from happening again.

If not a friend or acquaintance, then maybe a word with someone who is might be appropriate. Information could be discreetly passed on and that might be the end of the matter. 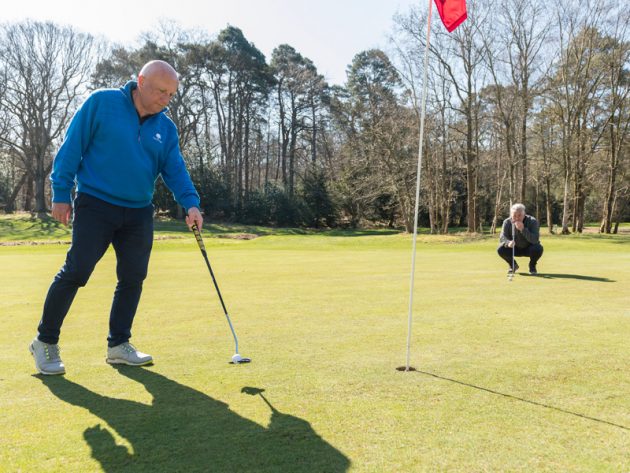 Giving yourself a putt without playing partners or opponents input is a big no-no (Credit: Tom Miles)

If, however, suspicions are raised on more than one occasion, it then may become appropriate to consider stronger action. But to do this, more than just anecdotal evidence would be required – one person’s word against another’s on a subject this prickly won’t cut it.

Most people would not feel comfortable, or able, to make an accusation of cheating without some sort of proof or multiple witnesses. That level of evidence may be difficult to come by, meaning many incidences of casual cheating are simply left to slide by.

To a certain extent, there must be an element of ‘no smoke without fire’ when it comes to cheating in golf. Suspicions and stories exist – things glimpsed out of the corner of an eye or from a clubhouse window. If someone is spotted doing something dodgy, how likely is it that it’s the only time they’ve erred?

And are there degrees of cheating? With so many rules in golf and so many opportunities to break them, there is perhaps an argument that there’s a sliding scale; that there are some instances of rule breaking that are worse than others. Is dropping a ball down the trouser leg worse than pushing down grass behind the ball in the rough?

Golf Monthly’s view is that cheating is cheating, and any example of wilful rule breaking should be viewed as unacceptable on the same level. Improving a lie is cheating, calling a five when a six was made is cheating, knowingly using an illegal club is cheating, manipulating your handicap is cheating and doctoring a scorecard is cheating.

The only example of a lesser crime is when ignorance is involved. All golfers have a duty to understand the rules, but there are instances when a genuine misunderstanding may lead to an unintentional breaking of the rules. Perhaps a player asks another what club they have just hit, unaware the rules don’t allow that, or they take an incorrect drop without fully understanding the rule or method that should have been applied. 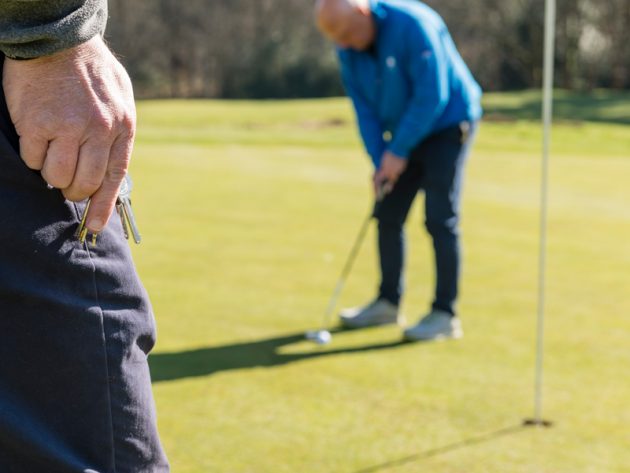 Deliberately putting off an opponent can be hard to prove (Credit: Tom Miles)

The problem is that incidents seemingly involving ignorance are far easier to challenge and deal with. Spotting someone taking a bad drop, most would feel happy to point out the error and ‘educate’ the player for next time. It’s quite different to accusing someone of blatant cheating. The fact that doing this presents such a minefield, opening accuser as well as accused to scrutiny, means it’s likely that many cheats throughout the game consistently get away with it unchallenged.

With anecdotal evidence at every level of the game, such broad scope for infractions and a reliance on self-policing that a minority choose to be a little lax on, cheating is, unfortunately, something that exists in golf. Most cases go unreported; others are dealt with privately and quietly.

What golf must do is continue to cherish the importance of integrity at the very core of the sport. It must educate newcomers to the game that to be a proper golfer, at whatever level you play, you must be honest with yourself and those you play with and against.

As golfers, all we can do is make sure we follow that guiding principle and be prepared to speak up when we see a fellow golfer breaking or stretching the rules. A polite and quiet word might be all it takes.

With that in mind, here are Golf Monthly’s top-ten areas where golfing cheats look to ‘get away with it’. Keep your eyes peeled…

“I’m not playing it from there” 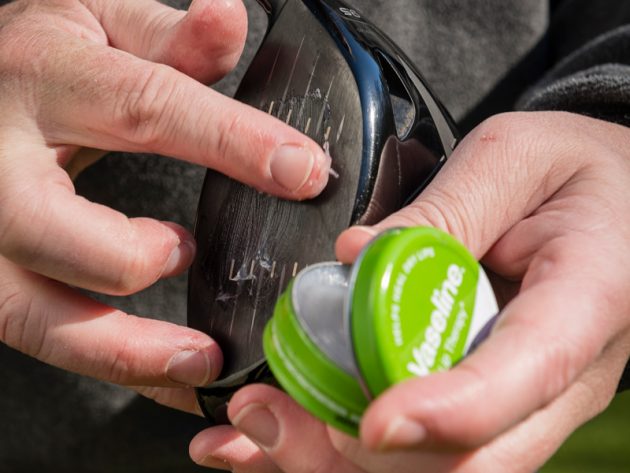 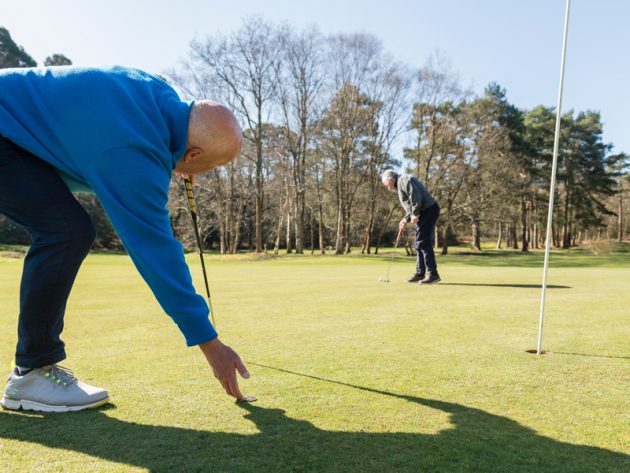 A player moving their ball marker closer to the hole can be hard to spot (Credit: Tom Miles)

Banditry – yes, this is cheating too 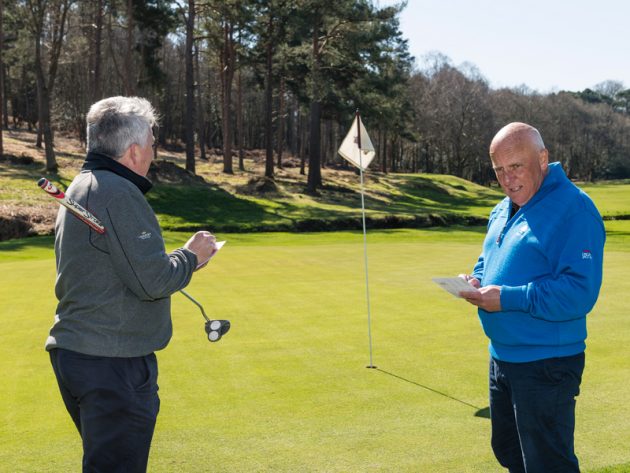