This year, because of the reduced daylight in November, compared with the Masters’ usual April date, a two-tee start has had to be used. But is it an advantage at Augusta to be starting on the 1st tee or the 10th?

Does Starting On The 1st or 10th Tee At Augusta Make A Difference?

There has been much discussion beforehand as to whether starting on the 1st or 10th tee at Augusta National makes a difference. Each player over the opening two rounds will start a round on each to make it equitable.

A two-tee start is common in tour events. So starting on a 10th tee will not be strange to the players. However it is unusual at Augusta. The Masters’ small field does not normally require it unless bad weather curtails the time available.

So, which tee would a player likely do best starting off from?

Starting on the 10th hole at Augusta means you get to Amen Corner quite soon in your round. Do you want to encounter this potential card wrecker so early on? The 10th, 11th and 12th holes are ranked 1st, 2nd and 4th in difficulty respectively.

Or do you just want to get it over with? That way you can take on less intimidating holes when you are more in the swing of things. 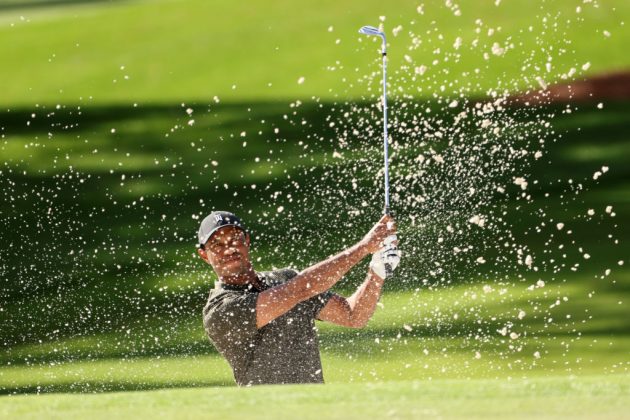 Tiger Woods escapes from bunker trouble on the 2nd hole, which was the 11th hole he had played. Picture credit: Getty Images

As to whether starting on the 1st or 10th tee at Augusta National make a difference, an unscientific anecdotal straw poll beforehand suggested that starting on the 10th hole may be a slight disadvantage.

After all, didn’t Tiger Woods in 2005 play his first round from the 10th? He shot 74. Next day, playing the holes in the familiar order, he carded 66, en route to eventual victory.

But that is not how it has worked out so far on the opening day. Throughout the session the leaderboard has featured in the top 10 places as many, if not more, starters on 10 as on 1.

But not all off 10 have done well. Bryson DeChambeau soon encountered trouble in Amen Corner. However birdies at 8 and 9, his final two holes, took the bookies’ favourite into the clubhouse at under par.

With Casey, Simpson, Oosthuizen and Matsuyama all starting on 10, it has been mainly left thus far to Westwood and Schauffele to fly the flag for those off the 1st.

Moreover Tiger Woods, who was again drawn to start out on the 10th, put together a round out of kilter with his recent mediocre form.

Justin Thomas started on the 1st and had 4 birdies out of the first five holes.

We would have to say that of course some players will prefer one option or the other, but there doesn’t seem to be any particular advantage.

Garmin Approach S60 GPS Watch £299.99 at American Golf
If you are in the market for a GPS watch then Garmin make some of the best. This S60 is a case in point. It looks fantastic and has over 40,000 courses loaded onto it, you can use it’s drag-and-drop functionality to measure distances, hazards, and move pin positions. It can also be used to monitor runs, swims and bike rides for great additional value.

Callaway Chrome Soft X Golf Balls $39.99 with Worldwide Golf Shops
A model that proves popular out on Tour, the ball is constructed with an improved urethane cover which delivers increased ball speed on full shots. Right now you can get $8 off on the Chrome Soft X balls if you want firmer feel and lower spin with the driver.