We look at how Molinari’s Augusta challenge fell spectacularly apart with a devastating stretch on yet another dramatic final nine holes at the Masters.

It all seemed so easy. For three days, Francesco Molinari hardly put a step wrong as he precisely plotted his route through the 2019 Masters.

With his ever-dependable long game joined by a newly rejuvenated short game, the Open Champion looked every inch the Green Jacketeer.

There is something about the final nine holes at Augusta National however, that delivers excitement year after year.

The cheers and groans dominate the air and last year, the latter came courtesy of the diminutive Italian.

As Molinari boarded the 12th tee he appeared unflappable, self-assured and confident, the product of a major win and a spectacular Ryder Cup performance.

A Masters win seemed to be the natural progression for a player who had transformed himself into a world class winner.

However, beneath the surface there was clearly a question mark.

Through the front nine, his long game had uncharacteristically misfired, his rock solid putting stroke ensuring that he reached the turn with his starting two shot lead in tact.

Molinari will not be the last front-runner to find the water on 12 but his mistake was more than just a wrong club. 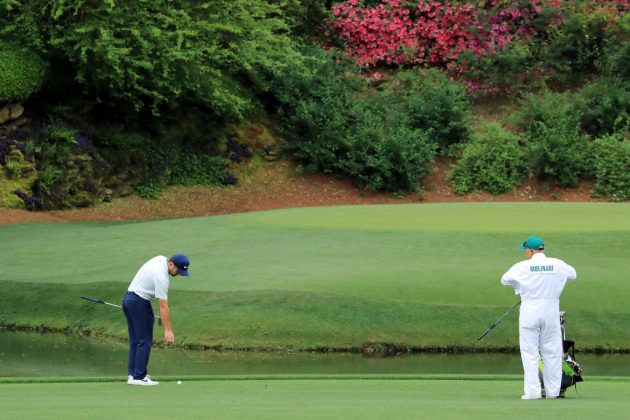 With a two shot lead, there was no need to take on the flag, a safer target further left would surely have been smarter.

To his credit, he bounced back quickly with an impressive two-putt birdie on 13. Where many have compounded the initial error in the past, so Molinari gathered himself to regain a share of the lead.

The Italian’s next mistake came with a pushed drive on 15. In the pine straw and stymied behind the trees, he was forced to play for position but missed the fairway to the left.

A relatively straight-forward (by Augusta’s standards, at least) pitch resulted in disaster.

The ball shot up off the blade of his wedge and struck an overhanging branch that he clearly hadn’t previously noticed.

Taking all pace off the shot, the ball barely made it half way across the water. In that moment, his chances were gone.

Winning any golf tournament is hard but the Masters takes the self-doubt all golfers battle with and amplifies it.

Molinari’s mistakes were small and in truth probably wouldn’t have cost him so badly in other major Championships.

But the Masters is a different beast.

As he reached Amen Corner, his game was not as strong as it had been earlier in the week. Those niggling self-doubts were exposed and Molinari looked fallible for the first time.

Another chapter in the legend of this historic sporting landscape had been written.

The next player to stand on the 12th tee with the lead on Sunday afternoon will have to contend with images of yet another player to have fallen foul of this place.

Getting over the line at Augusta National, it seems, gets harder and harder.

Under Armour Elevated Tour Baseball Cap £18.90 at Scottsdale Golf
Coming in size M/L, this Under Armour baseball cap is available in both grey and navy with over £11 off its usual price of £30.

Callaway Chrome Soft Golf Balls $39.99 with Worldwide Golf Shops
Save eight dollars today on Callaway’s Chrome Soft golf balls. A model that proves popular out on Tour, the ball is constructed with an improved urethane cover which delivers increased ball speed on full shots while providing even softer feel and more control around the greens.

Women’s British Open To Go Ahead Without Fans In August