With the course drying out a tad from the dousing of day one, how does this affect the stats for the second round? We crunch the numbers.

A couple of familiar names from The Masters round one pop up again in our best and worse of the second round stats stakes. But one player who doesn’t is Bryson DeChambeau, who was outdriven as the round’s longest hitter.

The first round saw one player reach perfection for Greens in Regulation. This time perfection was achieved by three golfers in the fairways-found category.

Here are the key Masters 2020 second round stats:

The easiest hole in relation to par remains the par-5 2nd. Moreover it got slightly easier as the average score on it decreased a touch. In the first round it was 4.49; in the second it was 4.42.

The hardest hole in relation to par was the par-4 18th (4.308). The first round’s hardest hole, the par-4 10th, was only the fourth hardest second time around, with the 1st and 7th holes, both par 4s, overtaking it.

The second round saw nine eagles made. With 21 eagles over the first two rounds, the Masters eagles record does not look to be in danger at this stage.

The hole which has yielded the most eagles was again the par-5 15th, with four of these nine. 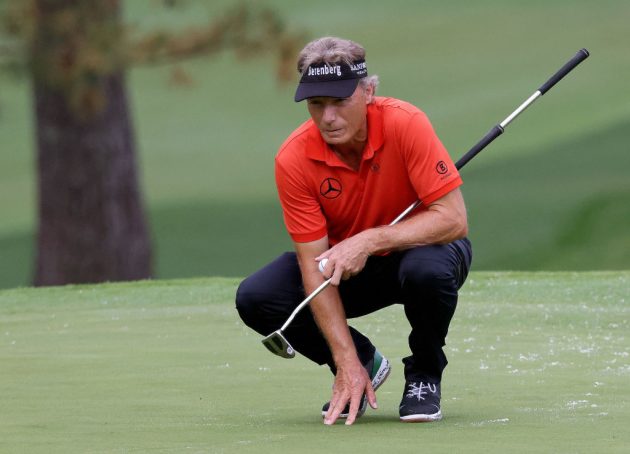 Larry Mize again topped the driving accuracy charts, again with company. In the first round he and Bernhard Langer hit 13 of the 14 fairways. In the second round he went one better, and scored a perfect 14. So did Sandy Lyle and Rickie Fowler. Fowler was hitting it 300 yards; Mize 257 and Lyle 275 yards.

The round’s most wayward driver was JT Poston who found only three fairways. Now this is a Masters performance that many can relate to.

The award for Best for Greens In Regulation in the Masters 2020 second round stats prize giving would be shared – if this award actually existed – by Dustin Johnson and Masters debutant John Augenstein, who both managed 16.

South African Dylan Frittelli is awarded this article’s headline picture for knocking Bryson DeChambeau off the top of the long-driving charts. He averaged 330.5 yards, DeChambeau 321.9 yards. The chap with the shortest walk to play his second shot was once again Larry Mize.

Bernard Langer, 63 years young and an inspiration to many, remains the king of the flat stick in this tournament. His 52 putts over the first two rounds beats everyone else. It certainly beats poor old Nate Lashley who putted 68 times, with four three-putt greens.

Who Is Matthew Wolff’s Girlfriend?