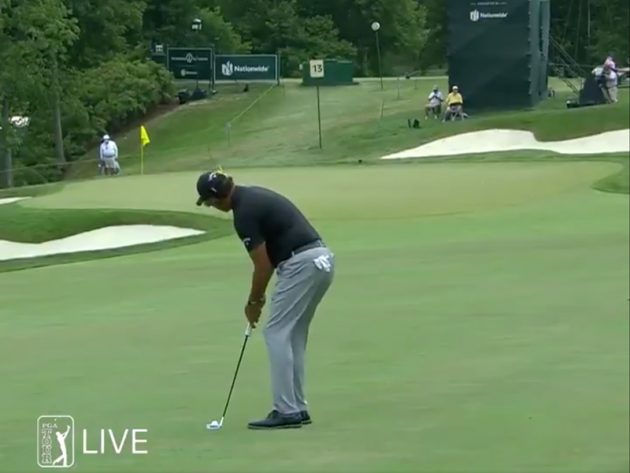 Phil Mickelson is known as one of the best wedge players in the game but he decided to take the low route during the final round of the Memorial.

The American had 78 yards to the pin on the 13th hole and instead of trying to wedge it in close he took out his putter.

Watch the video below where Lefty didn’t quite hit it hard enough:

“So the reason I tried to putt was the fairway prior to the green was pitched more severely right to left, and if I used that slope it was going to angle and get the ball working over to the left pin and possibly get close, whereas if I hit a wedge shot and flew it on to the front edge or just short, it wasn’t using that extra pitch or contour to get the ball over to the left. I would have had to settle for a good shot being 12 or 15 right of the hole,” he said.

“I didn’t hit it hard enough, but if I had hit that hard enough or the right speed, I think that ball could have gotten close to the hole to a tap-in, whereas a wedge I didn’t see that being possible.”

He then hit another rarely seen shot on the par-3 16th where he actually laid up and putted from 42 yards.

“16 is a hard hole. I played it eight days. I’m 10-over. So I improved my score .2 today by playing for a 4, and I’ve made four or five doubles on the hole, and it just is a hard golf hole for me,” Mickelson explained.

“Obviously you can’t go left in the water, and when I go right, usually it’s a hotter shot like I pull it or it draws and it’s always on the downslope of the bunker, and I just can’t stop it oftentimes on the green.

Mickelson finished T54th at nine over.

Best Golf Gift Cards – Let Them Pick Their Own Gift

Five surprises from Round 1 at the Masters