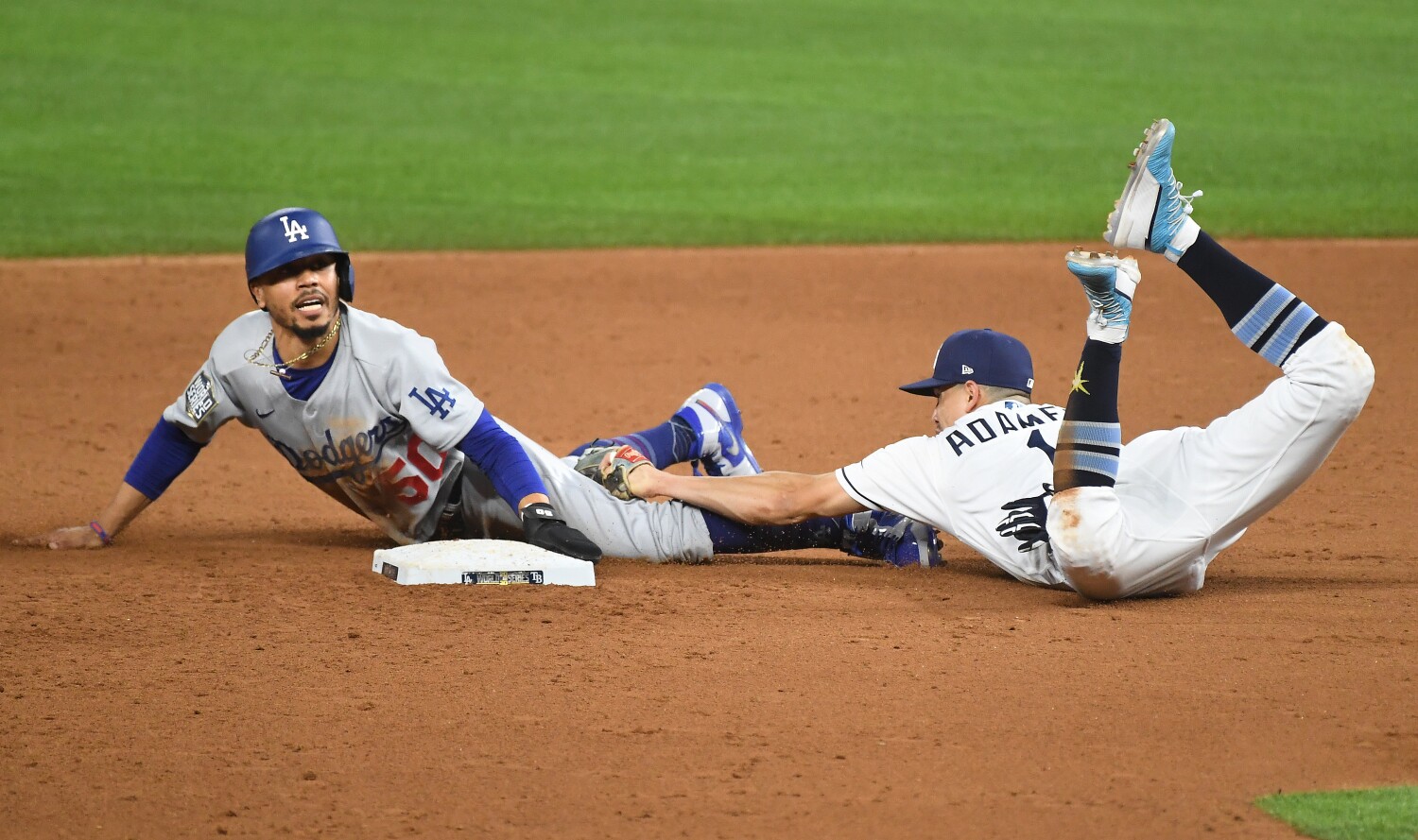 They spent countless hours together, the journeyman outfielder and the visionary who changed how the game was played. They practiced at Dodger Stadium before games and talked over the phone after.

Earlier this week, Dave Roberts recalled one of his many conversations with his old mentor, Maury Wills.

“When you’re in the batter’s box and you get to first base, you want the attention to still stay on you,” Roberts said Wills told him.

“Mookie just has that desire, that confidence, that swagger, whatever it is, that once he gets there, he wants all eyes on him because something might happen,” Roberts said. “What that does, in turn, is it forces that pitcher to potentially make a mistake to the hitter and exponentially benefits the team.”

Betts didn’t win the National League’s most valuable player award in his first season with the Dodgers. The prize was awarded Thursday to Freddie Freeman of the Atlanta Braves, with Betts finishing second in a vote by members of the Baseball Writers’ Assn. of America. Freeman received 28 first-place votes and Betts got the other two.

This was Mookie Betts’ year.

The postseason provided the necessary stage to prove that, with Betts leading the Dodgers to their first World Series title in 32 years.

He restored their championship tradition by reintroducing another part of their heritage.

The Dodgers are the franchise of Jackie Robinson, who stole home 19 times — not counting the most famous instance, which was against Yogi Berra and the New York Yankees in the 1955 World Series.

They are the franchise of Wills, a former MVP who inspired stadium-wide chants of “Go, Maury, go!”

They are now the franchise of Markus Lynn Betts, a former American Leaguer who bridged the new with the old by hitting 16 home runs and stealing 10 bases in 55 games.

Betts stole six more bases in the postseason, including four in the World Series.

“Stolen bases are a thing for me,” Betts said. “That’s how I create runs. That’s how I cause a little havoc on the bases. So I take pride in stealing bases. And once I get on the basepaths, I’m just trying to touch home and however I get there is how I get there.”

Like Robinson and Wills before him, Betts terrorized opponents on the basepaths with a rare combination of athleticism and know-how.

“Mookie is not the fastest guy in the league, but I’ll take his jumps against anyone,” Roberts said.

As a player, Roberts was once the proud caretaker of the Dodgers’ baserunning culture, as he was their stolen-base leader in each of his three seasons with them.

Roberts was 29 but a veteran of only 75 major league games when the Dodgers acquired him in a trade with the Cleveland Indians. In the winter leading up to the 2002 season, he drove three times a week to Dodger Stadium from his home in north San Diego County to receive instruction from Wills. The sessions extended into the regular season.

“I had to be that type of player to be relevant,” Roberts said. “Mookie doesn’t necessarily need that. But that’s what separates him from the other great players in the game, in my opinion.

“He is more present than any superstar I’ve ever been around.”

Everything starts with what Roberts called “give-a-[blank].”

“I think there’s a certain baseball acumen or knowledge, but, again, that goes back to care,” Roberts said. “To be a really good baserunner, you have to watch the game. You have to know where guys are positioned, understand the score, arm strength, what defenders can and can’t do, what pitchers can and can’t do, their tendencies. When you have all that, now your instincts can take over.”

Roberts pointed to a double steal Betts orchestrated in Game 2 of a National League Division Series against the San Diego Padres.

The Dodgers were ahead by a run with one out in the seventh inning, with Betts on second base and Corey Seager on first. With Justin Turner at the plate, Padres manager Jayce Tingler called on left-hander Drew Pomeranz.

As the Padres changed pitchers, Betts raised the possibility of a double steal with Seager. The gamble worked and resulted in a couple of insurance runs for the Dodgers.

Many players were troubled by the rules that prohibited them from accessing video technology in the clubhouse during games.

“Because his DNA is to watch the game anyway and talk to teammates, talk to coaches,” Roberts said.

Few players have the mental stamina to sustain that kind of focus over an entire game, or a season. Roberts chuckled as he recalled how in his first season as the Dodgers manager, he had to lecture his players over their inability to pay attention to their guest speakers.

The concentration is responsible for the kind of moments Betts produced in the World Series. Hitless in his first two at-bats, Betts drew a walk in his third plate appearance of Game 1. He stole second base, then led another double steal involving Seager.

That positioned Betts to score on a contact play later in the fifth inning. The Dodgers entered the bottom of the inning with a 2-1 lead. By the time it was over, they were up 6-1.

This was the new Dodgers baseball, the same as the old.