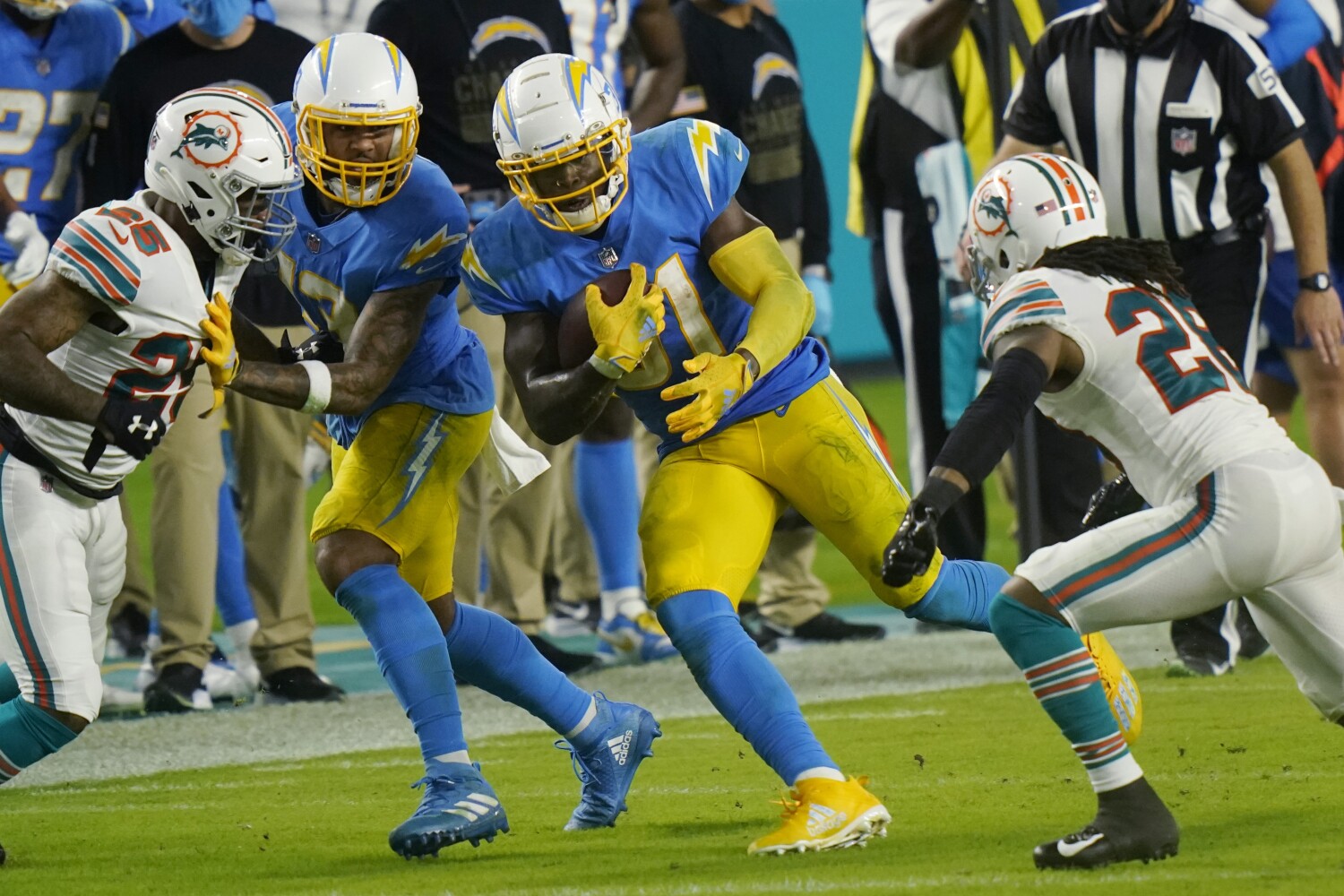 He was with three teams in the span of roughly six weeks, moving from south Florida to New Jersey to Southern California, which is a lot of yardage, even for an NFL running back.

After all that traveling, Kalen Ballage has found a home, at least for the last few weeks with the Chargers.

“I feel like I was always this type of running back,” he said Friday. “You know, maybe just wasn’t in the right place, the right time to be able to do some of the things I’m doing now.”

Ballage has emerged as the Chargers’ top back the last two games, rushing 33 times for 137 yards and catching seven passes for 49 yards.

On Sunday against the New York Jets, he’s expected to remain the team’s No. 1 option, unless someone else seizes the job.

Coach Anthony Lynn said the Chargers will continue to use Josh Kelley and perhaps Troymaine Pope, but Ballage apparently will be featured to start.

“I’m going to give him more looks,” Lynn said. “Right now, I would say he’s the primary guy.”

Ballage spent his first two seasons with Miami, which drafted him in the fourth round in 2018 out of Arizona State. After the Dolphins released him in late August, he signed with the Jets and appeared in three games before they let him go on Oct. 5.

A few days later, the Chargers signed Ballage to their practice squad as insurance in the absence of Austin Ekeler, who suffered a hamstring injury in Week 4.

“It’s been crazy,” Ballage said. “It’s been hectic. But, obviously, it’s a blessing for me to be here with the Chargers.”

As a rookie, Ballage had a 123-yard game at Minnesota in December 2018. That career-best performance included a 75-yard touchdown run.

His next two most-productive games have come the last two weeks for the Chargers, who also are missing Justin Jackson because of a knee injury.

“He’s got good vision,” offensive coordinator Shane Steichen said of Ballage. “He’s a physical runner. He’s patient in the holes, and he hits the creases. There might not be big holes sometimes, but he’s able to find little creases.”

Ballage’s increased role just happened to coincide with his two former employers arriving on the Chargers’ schedule. He said he has no animosity for the Jets or coach Adam Gase, noting the NFL is a business. In fact, Ballage used the word “love” in discussing his feelings for Gase.

“Things worked out the way they worked out,” Ballage said, “and I’m kind of glad, to be honest with you.”

He praised Lynn and thanked the Chargers for embracing him and providing an opportunity.

Ekeler continues to progress toward a return, though his work has been limited to individual drills. Jackson’s status is less clear.

So, at least for another week, Ballage will enter game day as the Chargers’ No. 1 running back.

“When I have the ball in my hands, I don’t want to be brought down on the first tackle,” he said. “I want to be reliable, someone they can trust — pass protection, catching the ball, running the ball.”

The Chargers have had significant issues on special teams this season and now long snapper Cole Mazza is questionable for Sunday because of an undisclosed illness. Mazza, in his second season out of Alabama, was unable to practice the last two days.

If he’s out against the Jets, fullback Gabe Nabers likely would replace him, Lynn said. Offensive tackle Trey Pipkins is another option. Both Nabers and Pipkins were backup long snappers in college, according to Lynn, though he said neither snapped in a game.

The Chargers are expected to promote practice squad linebackers B.J. Bello and Cole Christiansen to help on special teams. Bello has appeared in 27 NFL games, most recently with the Jets last season. Christiansen is a rookie out of Army.

Backup quarterback Tyrod Taylor also is questionable because of a rib issue. He was hurt in the season opener and has been dealing with the injury since.

“He didn’t regress,” Lynn said. “He’s doing fine. He just wanted to get something checked out. Once he got that checked out, he’s very confident he can go in and play in the game and be OK.”

Cornerback Chris Harris Jr. continued to practice Friday on his way back from the injured reserve list. Harris suffered two broken bones in his foot in Week 3. He’s not expected to be activated until next week, at the earliest. … Sunday will be Casey Hayward’s 106th consecutive game, the longest active streak among NFL cornerbacks.