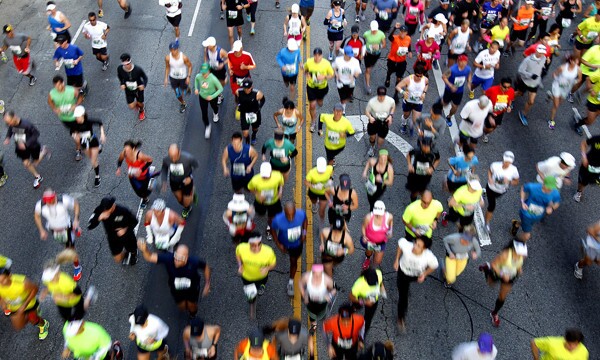 In an effort to bring more space to the finish-line area, officials of the Los Angeles Marathon have decided to change the end of the course starting in 2021.

The race has finished near the Santa Monica Pier for the last 11 years but now will end on the Avenue of the Stars in Century City.

“We had a footprint challenge in Santa Monica, just from a space perspective,” said Murphy Reinschreiber, the chief operating officer of the McCourt Foundation, which stages the race. “We realized that there’s so much more we could do if we just had a bigger footprint at the finish line.”

The increased room will allow for improved accommodations for VIPs, elite athletes and the various running clubs and charity organizations that have a presence at the race.

The new course will track the same route used in past years into Brentwood, where — just past mile 22 — it will double back on San Vicente Boulevard and head for Century City.

“It was time to take the next step forward in the evolution of the marathon,” Reinschreiber said. “The more we looked at Century City the more we understood the bigger space would allow us to take the race to the next level.”

The 2021 L.A. Marathon is scheduled for March 21, pending the latest on the COVID-19 pandemic. It would mark the event’s 36th year.

The 2020 race attracted more than 26,000 registrants and was one of the final official mass gatherings in the Southland before stay-at-home orders were put in place.

Angels prepare for life on the road amid COVID-19 pandemic

Column: MLS Is Back tournament is a good test of a protective bubble for athletes

Lakers’ cohesiveness could be paying dividends in NBA bubble