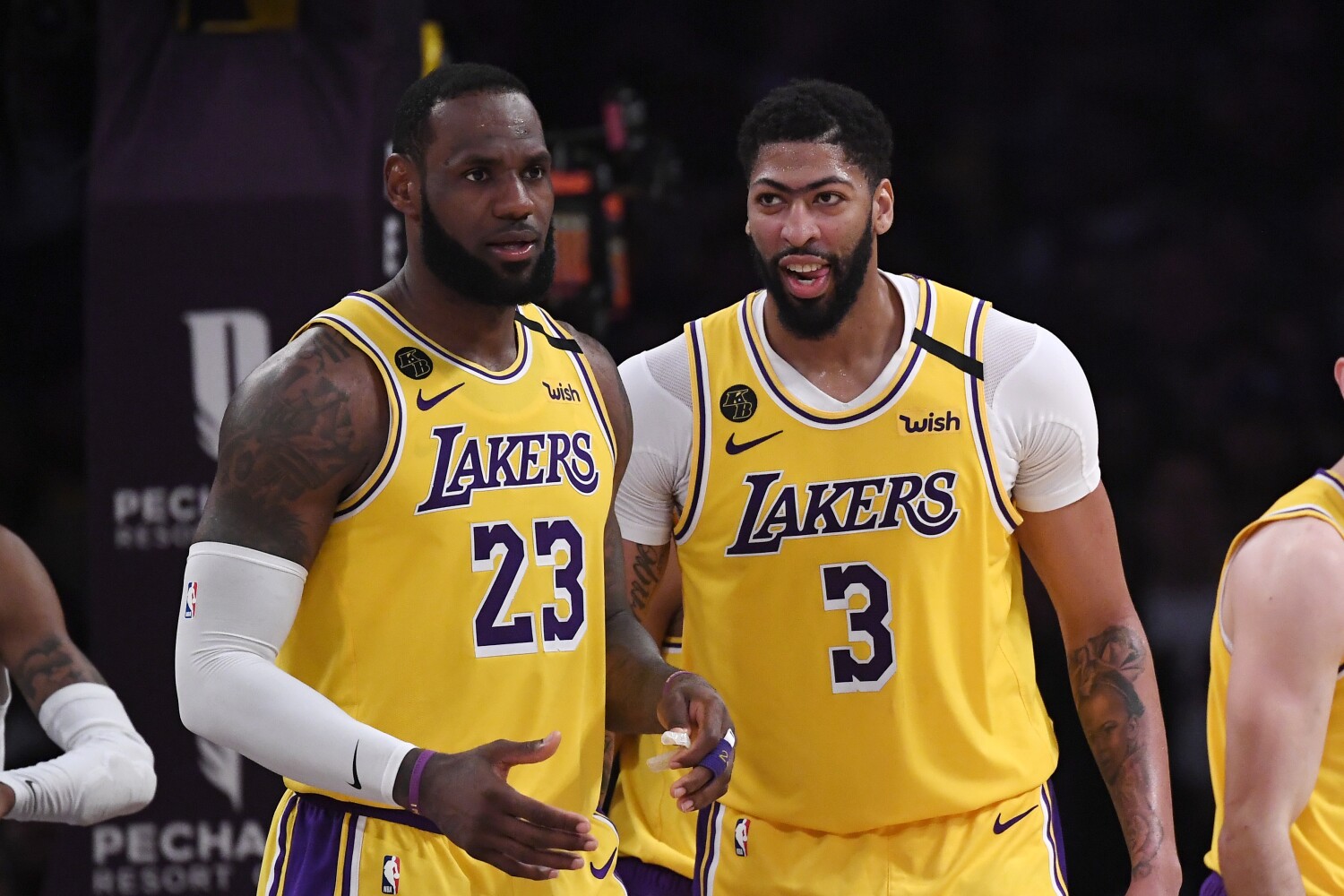 LeBron James grabbed the rebound and raced up the court, past every member of the Dallas Mavericks. He elevated to the right of the basket and dunked with his right hand, before his momentum took him into a stanchion just in front of screens with Lakers logos on them.

He ran back down the court, through a loose throng of players, and made a declaration.

Or did he say baddest?

Ever the showman, James had his stage back Thursday night.

The Lakers scrimmaged against the Dallas Mavericks at the Visa Athletic Center at Disney’s Wide World of Sports Complex, falling 108-104. James and Anthony Davis played in the first half. James finished with 12 points, five assists and three rebounds in 15 minutes of play. Davis also scored 12 points, with two steals, one assist and one rebound in his 15 minutes of playing time.

The Mavericks were led by Seth Curry (23 points in 16 minutes) and Luka Doncic (14 points, six assists and five rebounds in 17 minutes). Dallas’ 7-foot-4, Boban Marjanovic finished with 17 points, 13 rebounds and two blocked shots, and made the only three-pointer he attempted.

The game had almost everything a Lakers game at Staples Center might have.

The pregame football ritual. The elaborate handshakes at player introductions. James calling out defensive assignments, or yelling “and one” after plays where he took contact while shooting whether he got the call or not.

Only this time you could hear every last bit of it.

The NBA’s experimental restart amid a worsening COVID-19 pandemic looked different from any game the Lakers ever played. There were no fans in the building, only personnel from the Lakers and Mavericks, a dozen reporters, and those needed to conduct game operations.

Before the game the video boards showed dancing Laker Girls, each in their own small portion of the screens. In total they took up the length of the court in three directions. For some games there might be virtual fans in these on-screen boxes, but throughout Thursday night’s game, it was simply purple with a Lakers logo on it for the entire night.

Kentavious Caldwell-Pope started in place of Avery Bradley, who opted out of the restart, but the rest of the starting lineup remained unchanged from most of the season — James, Davis, Danny Green and JaVale McGee, who led the team with 13 points. Markieff Morris cleared quarantine Thursday morning after arriving in Florida on Tuesday evening. Alex Caruso missed the game because of a back contusion sustained during practice Wednesday.

The energy in the building was apparent from the start, and the Mavericks matched the Lakers’ volume in the Visa Center, which is the smallest of the three venues in which teams will play.

Dion Waiters saw his first action as a Laker, and so did J.R. Smith. Every time Waiters scored, all the players on the Lakers bench jumped up and yelled his nickname: “Cheese!”

James’ dunk came near the end of the second quarter and gave the Lakers a 55-44 lead at halftime.

Dallas kept some starters in for portions of the second half, and the Mavericks were able to overtake the Lakers during that period, with their reserves finishing the job.

By the third quarter, James and Davis had both settled into comfortable clothes. James wore necklaces and watched from the corner of the bench, with seats spaced a little bit farther apart than would be in non-pandemic times.

They’ve got a long way to go to accomplish their goals when the season restarts July 30, but Thursday gave them a first look at what Florida basketball will be.