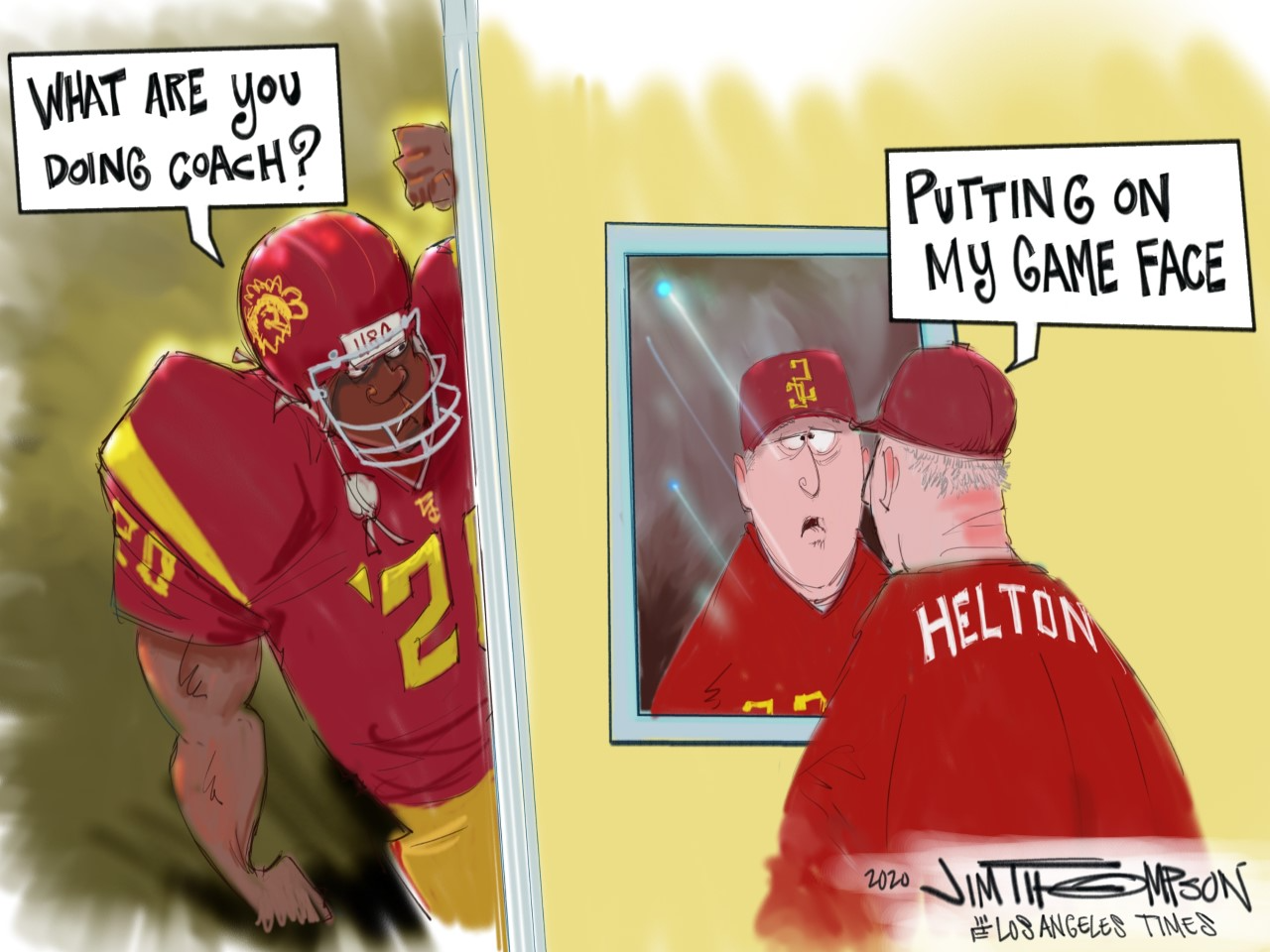 Clay Helton’s Trojans are undoubtedly the worst 2-0 team in the history of college football. In both wins, their opponents literally snatched defeat out of the jaws of victory. Turnovers, penalties and poor clock management were the hallmarks of both games. Suffice to say, this Trojans team should thank its lucky stars the pandemic resulted in cancellation of the Alabama and Notre Dame games. Helton was born with a horseshoe up his rear end!

As a loyal Bruin I hate to admit this, but after watching USC’s two last-minute gift touchdowns, I realize God must be a Trojan.

Relieved the USC Marching Band isn’t playing live at games this season. After the first two “wins,” the traditional playing of “Conquest” would now be capped by Trojans’ updated battle cry of “Beat … Ourselves!”

USC’s in-game struggles are not just about Xs and O’s but also Zzz’s because Helton’s Trojans are soft as pillows and they sleepwalk through the first 58 minutes.

Wake me when this bad dream is over.

If your football team needs a lift, go see Cal

Like many UC Berkeley alumni, I am accustomed to regular reports of Bruin sport triumphs over Cal. However what sticks in my craw is news of UCLA’s (taxpayer- funded) purchases of unnumbered peanut-butter and jelly sandwiches at the catered cost of $4.95 apiece.

While my proposed solution (Wonder bread + Smuckers and Jiffy) would not solve our state’s current budget challenges, it probably would not adversely affect UCLA’s success versus the Bears, particularly if UC Berkeley administrators were likewise asked to purchase spoons and knives and prepare their own sandwiches. Indeed, many non-college attendees are capable of self assembling the product.

The article says: “Pac-12 athletic directors live in fear of losing their coaches to other conferences.” I cannot imagine that the athletic directors of UCLA or USC have this problem, especially with respect to their football coaches.

What all those bemoaning the Chargers’ close losses ignore is that as long as they are in Los Angeles, which is not where they were wanted, they will be under a curse, or bad karma. No amount of personnel or coaching moves will change this. Even if there was no pandemic, we still would have seen thousands of empty seats.

Can the media now start calling them the Bumblers so they take the hint and go back to a fan base that really wants them?

Winning coaches don’t need to be a Leo Durocher tripping his mother rounding third, or Bill Belichick, an inveterate cheater, but LZ Granderson sets too low a bar when saying Anthony Lynn deserves another season. Being a good guy, instilling a never-say-quit attitude, and bad luck are not reasons to justify the status quo for the Bad-News-Bolts.

LZ Granderson layed out his argument as to why Anthony Lynn should retain his job. He basically believes that Lynn is such a great guy he deserves yet another chance to prove he’s not responsible for the losing. That argument, however, does not hold water.

Granderson admits there have been failings by Lynn in play calling, use of timeouts and preparation. He recognizes Lynn and his team have lost games every which way possible. And in postgame interviews Lynn called out his own players saying some guys out there today won’t be out there next week. That doesn’t sound like a mea culpa to me.

Maybe Lynn is not the great guy Granderson thinks he is. Maybe it’s time for a new coach and a new environment. Maybe.

Eric Sondheimer has got it right, as usual. It’s time to let professionals, coaches, ADs, etc., let the kid athletes do what they train to do. Other states have been able to get kids back on fields, in gyms, etc. California officials can survey the states that are allowing competition, pick the best protocols and use them to get the kids back to practice and into competition where they belong. Coronavirus statistics for California show persons age 0 to 17 have only 11% of the cases and two deaths since the beginning of the pandemic. Let’s get going!

is the time to get going.

As a father of two young women, I was beyond thrilled when the Marlins’ Derek Jeter named Kim Ng as the first female general manager in baseball history. I’ve been following her career since she worked for the Dodgers’ front office and I kept pulling for her to make this historic leap year after year. Coming the same week the U.S. voted in the first female VP only adds the hope my daughters can be anything they want! Bravo!

So the Dodgers have decided to lay off an unnamed number of employees because of the pandemic. Just out of curiosity, what were the combined salaries of all those hard-working men and women who have dedicated their lives to the Dodgers? Let’s generously put that figure at $3 million, no make that $5 million. Or the cost of a subpar journeyman infielder. Shame on the Dodgers.

The small business down the street that’s hit hard from the economy slowing due to COVID-19, yes you’d expect layoffs … but the Dodgers organization owned by one of the largest and most successful hedge funds in the country? Really? The Dodger organization that just a few years ago signed a huge TV deal with Spectrum?

Shame on all of the Dodgers executive decision makers: Guggenheim, Magic, Kasten and Guber should all be embarrassed, all millionaires, all approving layoffs for the struggling Dodgers employees.

Glad to see Le Melo Ball was drafted by the Charlotte Hornets. Can’t get LaVar much farther away.

Congrats to Perry Minasian. It’s a great Disney story. And we all wish you the best.

But please remember, Perry, you’ll be remembered by one thing: Did you get Mike Trout some pitching?

Onyeka Okongwu draft status in question because of broken toe