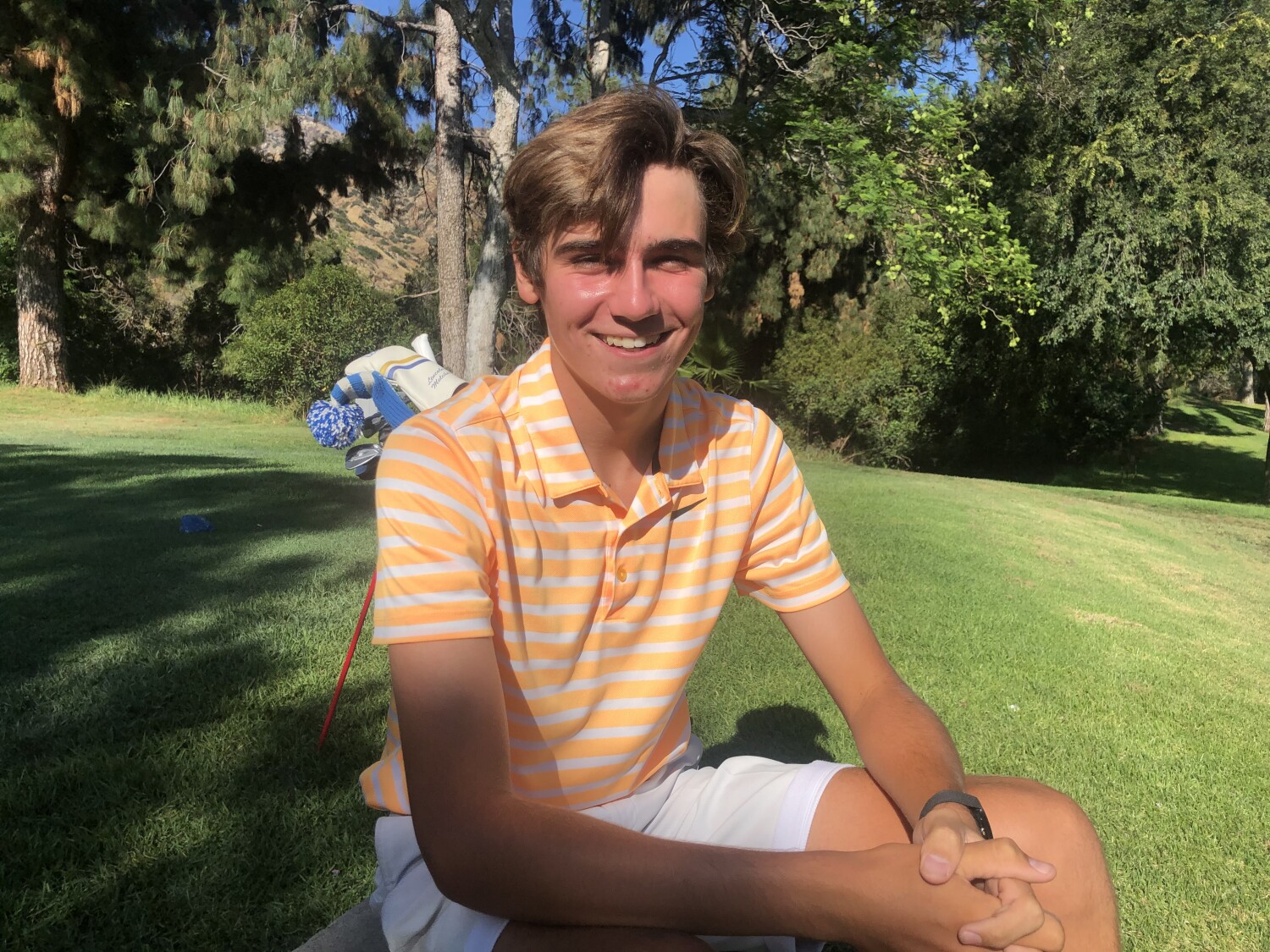 Three young deer are nonchalantly grazing near the No. 10 tee at DeBell golf course, and they don’t seem bothered by the presence of 16-year-old Lincoln Melcher. Perhaps it’s because Melcher spends almost as much time at the Burbank course as the deer.

“You can’t get too close or they’ll come at you,” he said. “They’re beautiful.”

At a time when COVID-19 has left many teenage athletes searching for ways to compete, practice and resume their daily sports pursuits, Melcher has been in “golf paradise” by playing morning through dusk seven days a week. He plays 18 holes in the morning at the Oaks Club in Valencia, then heads home to DeBell in the afternoon to work on putting or practicing his swing at the driving range.

Committed to UCLA since he was a high school freshman, Melcher won the Calloway Junior Golf Championship earlier this month, overcoming a four-stroke deficit by firing a 66 on the final round to win by four strokes at the Farms Golf Club in Rancho Santa Fe.

Golf isn’t his only passion. He’s an actor. When he was in middle school, he was known by classmates as the “Disney kid.” He played “Griff” for 13 episodes in the Disney Channel’s “Bunk’d,” leaving him a heartthrob to middle school girls.

“A lot of my friends were, ‘Oh my gosh. I watched you on TV,’ ” he said. “It’s weird seeing people that never thought of me being anything more than just their friend acting weird. They were nervous to talk to me.”

Melcher participates in show choir and drama at Burbank Burroughs High School, still goes on acting auditions and occasionally turns on his TV to discover a repeat episode from his Disney Channel days.

“I became a household name in 13-year-old houses around the nation,” he said. “People came up to me on the street, which never happened before. It was cool. I gained a lot of Instagram followers, which is cool in middle school.”

He picked up his first golf club at age 4, about the same time he started appearing in commercials as a child actor.

“They’re both very separate things in my mind,” he said. “Sometimes they conflict but most of the time they’re two different worlds.”

When on-campus classes stopped in March, golf courses also closed, leaving the then-sophomore scrambling. His mother bought him a target to practice his chipping in the backyard. He tried hitting off a mat, but that doesn’t help for real golf. He went for runs, rode a bike and worked on building his strength while trying to keep his slender 6-foot-1, 145-pound body in shape. He can drive a ball 280 yards but says he’s been “eating a lot.” He and his golf friends have been talking nonstop this summer about PGA sensation Bryson DeCambeau, who gained 40 pounds and has been hitting balls beyond 400 yards.

“That’s who we’re chasing in the fitness world,” he said.

Long drives with friends this summer produced, “You pulled a Bryson.”

Golf has been a sport allowing teenagers to get out of the house and thrive this summer at a time other sports have been shut down because of safety concerns. Youth on Course, a nonprofit based in Pebble Beach, reports it has seen a significant rise in members, with nearly 185,000 participants playing more than 1 million rounds so far this year.

Even when he couldn’t play golf, Melcher said he embraced the idea to find other ways to get better.

“It’s important to remember everyone is in the same place,” he said. “I feel it’s easy to get discouraged because you feel like you’re falling behind but most people around the world are going through the same things. Everyone had to deal with it. Every day, I’d work on new things. If I was having trouble, I’d make sure to fix it.”

Online classes at Burroughs begin Monday, so he’ll have to halt his all-day golf sessions. But he’s hopeful of competing for Burroughs in 2021 and being a contender for a CIF individual title. His confidence has been soaring.

“I’ve been working on my mental game the past couple of years,” he said. “I think that’s what was kind of missing. It’s helped tremendously. It’s a crazy change. If you’re going to play a good round, you have to stay present and hit every shot as they come.”

Pete Carroll looks back on 20 years with USC and Seahawks