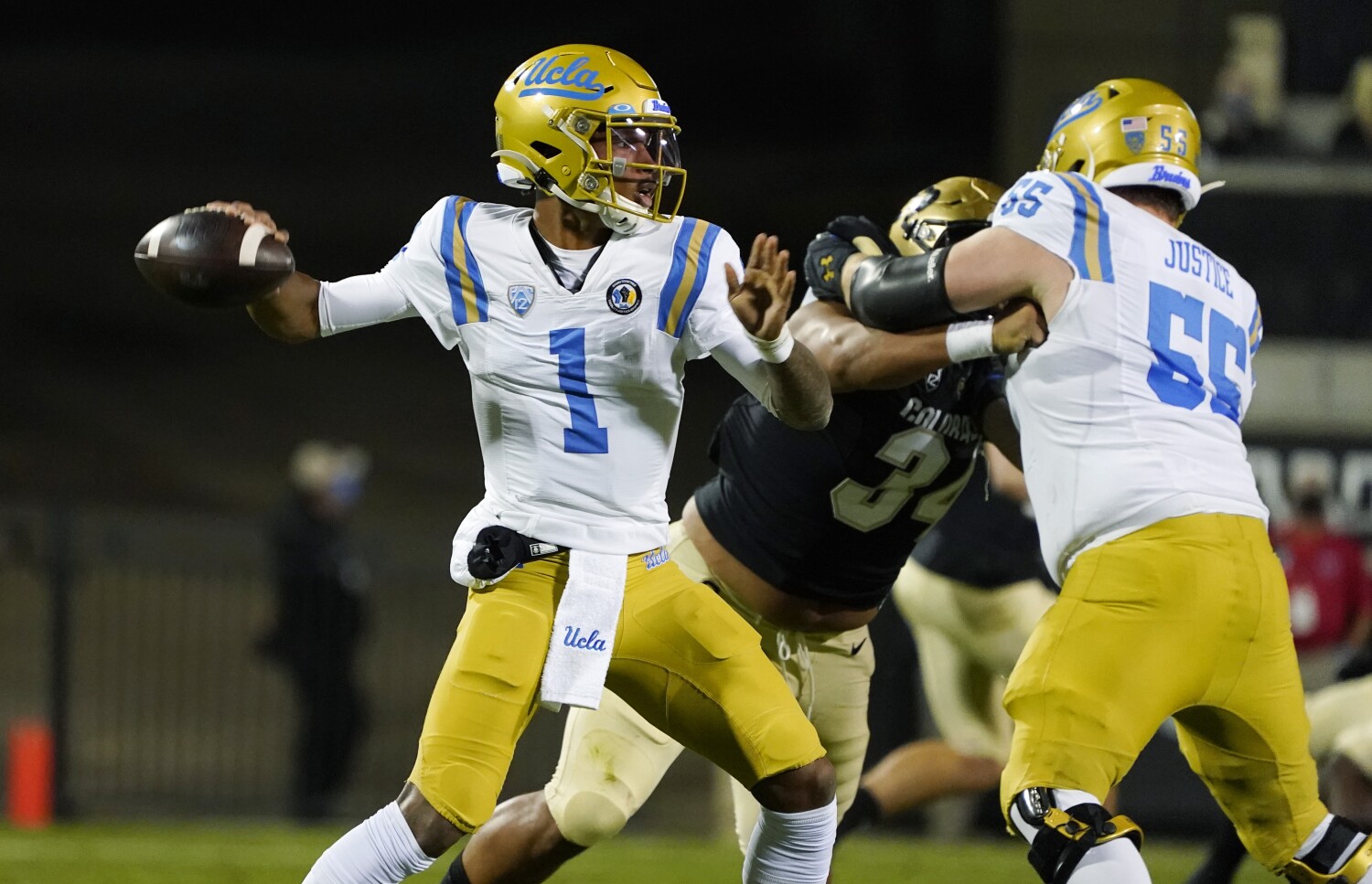 Paul Grattan Jr. picked up his phone Saturday night and saw that some old friends had sent him a snippet of video.

He didn’t have to press play to know what it would show.

It was the UCLA graduate transfer left guard leading a convoy of blockers who cleared the way for Demetric Felton Jr. to reach the end zone after catching a short pass in the season opener against Colorado.

“It was an awesome feeling,” Grattan said of his first highlight as a Bruin.

It was also the reason he became a Bruin.

Grattan would have finished his college career at Villanova had the COVID-19 pandemic not wiped out a fall season in the Football Championship Subdivision. Wanting to ensure he could complete another season before the NFL draft, Grattan entered the transfer portal. He heard from Michigan State, Baylor and Rutgers in addition to UCLA but opted for the Bruins because they initially had the latest training camp start date and ran an offense similar to Villanova’s.

The transition wasn’t smooth. Grattan had to quarantine for two weeks after flying to Los Angeles from his home in Pittsburgh and learned after only five days that the Pac-12 Conference didn’t expect to play football in the fall.

“Yeah, it stunk there for a little bit,” acknowledged Grattan, who busied himself in isolation with air squats and pushups.

Even after the Pac-12 announced a season reboot in September, there were struggles. Grattan had trouble learning the offense and spent the opening weeks of training camp with the second and third strings. Things started to click shortly before camp ended, and he won the starting job for the season opener.

The transition to Football Bowl Subdivision was exactly what Grattan thought it would be. The defensive linemen were bigger, faster and better, presenting challenges that Grattan didn’t think he met during the Bruins’ 48-42 loss to the Buffaloes.

“I didn’t live up to the standard that I always hold myself to,” Grattan said. “I’ve just got to keep working, work on little things.”

Informed that quarterback Dorian Thompson-Robinson had splurged for Wingstop for his offensive linemen in past seasons, Grattan floated one reason for why he hadn’t yet munched on free chicken.

“I haven’t received any Wingstop yet,” Grattan said, “but I also gave up a sack. So maybe that’s why.”

Grattan’s L.A. story hasn’t been a total downer. One of his sisters visited and they did the tourist thing, checking out the Santa Monica Pier, Malibu and Hollywood Boulevard.

He’s also grateful to play football given that other teams have had to stop practicing or playing. Grattan said that even a spring season for Villanova remained in doubt because, as of now, the team lacked adequate testing capabilities.

“I really feel for them,” Grattan said, “because I couldn’t imagine not playing the season.”

UCLA freshman defensive end and linebacker Myles Jackson posted on Instagram that he was out for the season after suffering a knee injury that would require surgery. A person close to the situation but not authorized to publicly disclose details of the injury said it occurred during practice earlier this week.

Jackson recorded one tackle for loss against Colorado while splitting time with starter Mitchell Agude.

Jackson was among UCLA’s 10 true freshmen who played in the opener, surpassing the nine who played all of last season. The others who played against Colorado were linebackers Damian Sellers and Choe Bryant-Strother, defensive backs DJ Warnell, John Humphrey and JonJon Vaughns, kicker RJ Lopez, punter Luke Akers and wide receivers Matt Sykes and Logan Loya. … The Rose Bowl will unveil several improvements Saturday even though fans will not be permitted to attend the game. There will be new LED lights that can sync with music as well as a new videoboard on the east rim of the stadium.