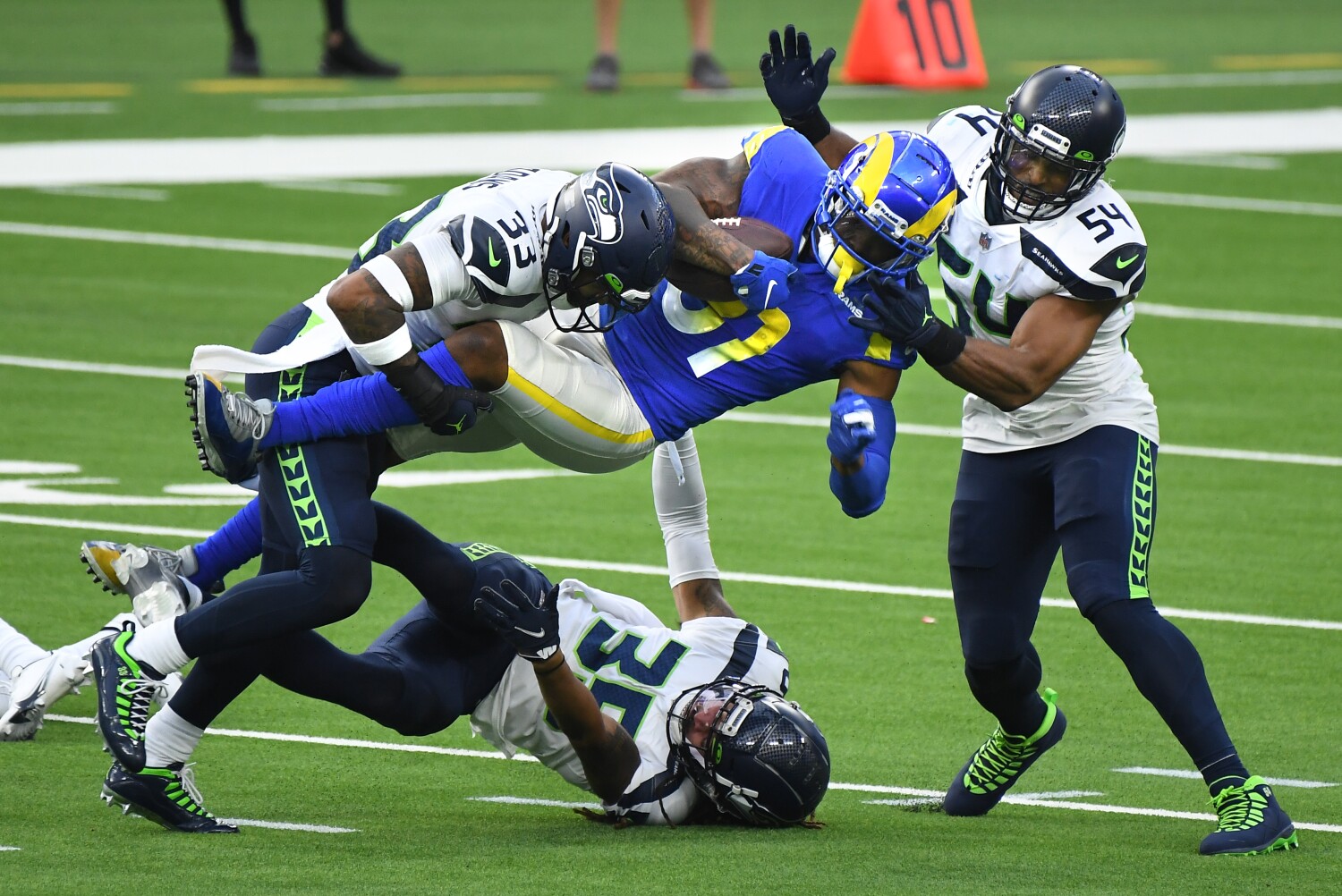 The lofty statistics and ranking were earned against some of the NFL’s least potent offenses.

But the Rams’ defense proved its legitimacy Sunday.

The Rams shut down the Seattle Seahawks and the league’s highest scoring offense in a 23-16 NFC West victory at SoFi Stadium.

The Seahawks went into the game averaging 34.3 points. But the Rams’ second-ranked defense, which had given up 19 points per game, stifled quarterback Russell Wilson as the Seahawks (6-3) lost their second game in a row.

Malcolm Brown rushed for two touchdowns and Darrell Henderson rushed for another to lead the Rams offense.

Sunday’s game was the Rams’ first since a 28-17 loss to the Miami Dolphins on Nov. 1, lowlighted by quarterback Jared Goff’s two interceptions and two fumbles.

Goff was more efficient against the Seahawks. He completed 27 of 37 passes for 302 yards. He lost a fumble on a day when veteran left tackle Andrew Whitworth suffered a knee injury.

It was a noteworthy victory for a Rams team that plays the Tampa Bay Buccaneers (7-3) next Monday night in their fifth and final road trip to the East Coast. It’s a marquee matchup outside their division before NFC West games against the San Francisco 49ers and Arizona Cardinals.

The Rams led, 17-13, at halftime after Henderson and Brown touchdown runs and Williams ended a threat with an interception in the end zone.

The Rams extended the lead in the third quarter with an 88-yard drive that ended with Brown’s one-yard touchdown run. Kai Forbath missed the extra point, leaving the Rams with a 10-point advantage.

Floyd, who had two sacks during one series in the third quarter, recovered a fumbled snap early in the fourth.

Williams ended another Seahawks drive when he picked off a Wilson with 7:48 left.

The Seahawks got the ball back with 3:29 left and kicked a field goal with 25 seconds left. But Rams receiver Robert Woods recovered an onside kick to seal the victory.

Wilson completed 22 of 37 passes for 248 yards with two interceptions. Metcalf, who entered the day leading the league in receiving yards, caught only two passes for 28 yards.