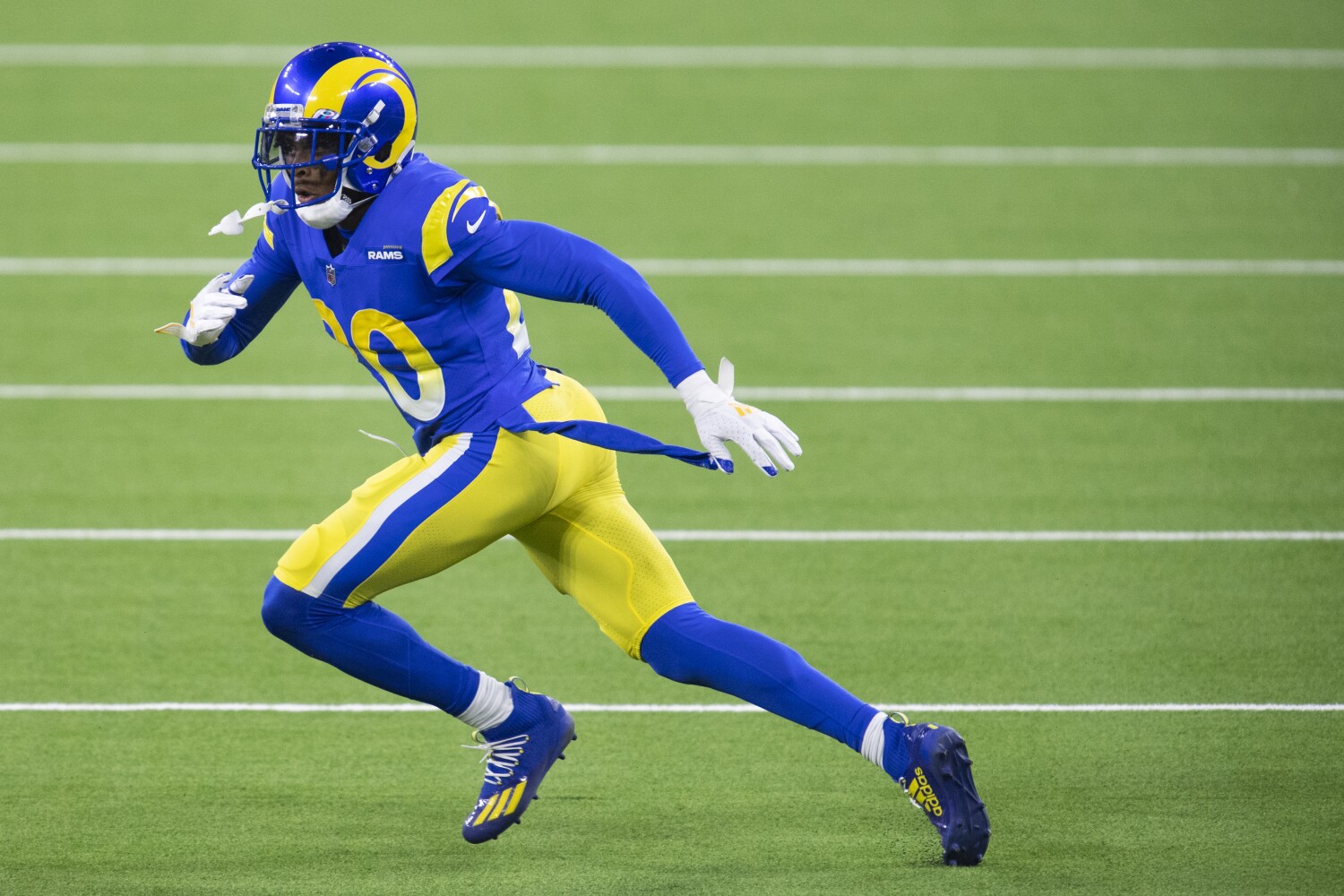 Another game, another elite matchup for Jalen Ramsey.

A week after shutting down Seattle Seahawks wide receiver DK Metcalf, the Rams cornerback is preparing to line up opposite Tampa Bay Buccaneers star wide receiver Mike Evans or his standout teammate Antonio Brown — or both.

“Every part of playing corner is pretty difficult if I’m being real about it, but that’s the fun in it — that’s the fun in the game and these challenges that I live for,” Ramsey said Saturday during a videoconference with reporters.

Ramsey, the highest-paid cornerback in NFL history, will once again be in the spotlight when the Rams (6-3) play the Buccaneers (7-3) in Tampa, Fla., on “Monday Night Football.”

“They got guys,” Ramsey said.

“He’ll probably go down as the greatest of all time,” Ramsey said of Brady, who is in his 21st NFL season.

Ramsey has not played against the 6-foot-5, 231-pound Evans, a seventh-year pro who has a team-best 40 catches, eight for touchdowns. Last season, before the Rams traded for Ramsey, Evans caught a 67-yard touchdown pass from former Buccaneers quarterback Jameis Winston in a 55-40 victory over the Rams at the Coliseum.

Ramsey played against the 5-10, 185-pound Brown three times when Brown was with the Pittsburgh Steelers, including once in the playoffs.

Brown joined the Buccaneers last month near the end of an eight-game suspension imposed by the NFL for violating the league’s personal conduct policy. In two games, Brown has 10 catches for 100 yards, including seven receptions for 69 yards in last Sunday’s 46-23 victory over the Carolina Panthers.

“Glad to see he’s back in the league,” Ramsey said. “Probably one of the top three, if not the best, receiver that I played in my career. Battles have been good. I’ve had some success and that’s been good, but he’s also done well as well.”

Brown is a seven-time Pro Bowl selection who has 851 career receptions, 75 for touchdowns.

“A Hall of Famer in my opinion,” Ramsey said.

Last Sunday, Ramsey limited Metcalf to two catches on four targets in the Rams’ 23-16 victory over the Seahawks.

How will Staley deploy Ramsey against the Buccaneers?

“Jalen’s flexibility provides us a lot of flexibility,” Staley said. “It’s not easy to move around, and when you’re essentially playing two full positions within a game and having full command over it — I think that’s as impressive as anything he’s done physically, is what he’s been doing mentally.”

After Monday’s game, Ramsey won’t have much time to rest.

Kicker Matt Gay practiced for the first time and was activated to the Rams’ roster Saturday, but coach Sean McVay declined to say whether Gay, Austin MacGinnis or both would kick against the Buccaneers. “We just got Matt in [Saturday], and he got an opportunity to kick and showcase his stuff,” McVay said, “and Austin was kicking earlier this week. So the good news is that with either one of these players, we feel really good about our situation, very confident, and it will be a good thing for us on Monday.” Gay, who had been on the Indianapolis Colts’ practice squad, made 27 of 35 field-goal attempts for the Buccaneers last season, including field goals from 58 and 21 yards against the Rams. MacGinnis is on the Rams’ practice squad but could be activated to the roster before Monday’s game. … Rookie outside linebacker Terrell Lewis did not practice because of an illness, according to the Rams’ injury report.