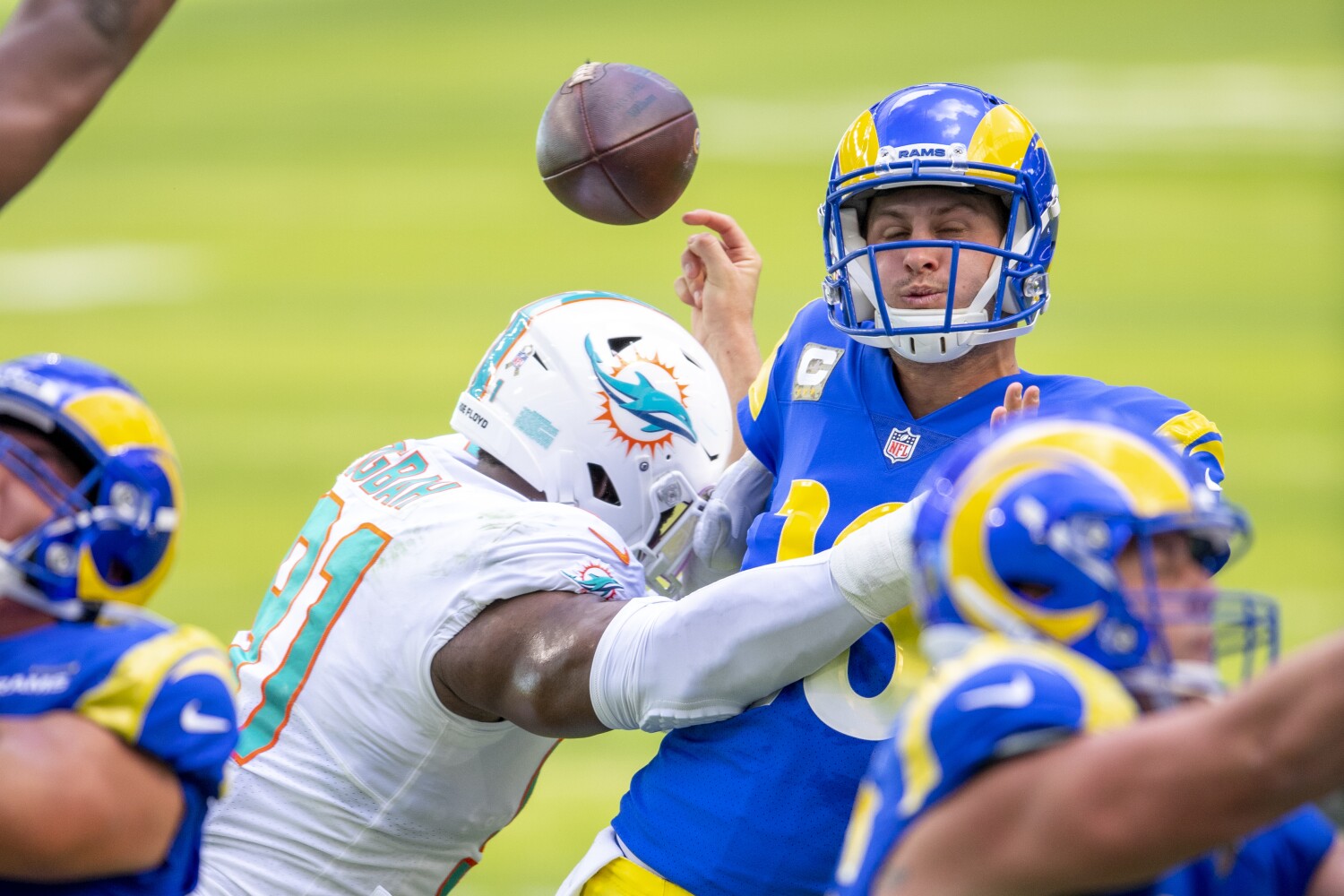 Breaking down how the Los Angeles Rams (5-3) and the Seattle Seahawks (6-2) match up heading into their game Sunday at 1:25 p.m. at SoFi Stadium.

When Rams have the ball: Coach Sean McVay and quarterback Jared Goff are eager to put the memory of Goff’s four-turnover debacle at Miami behind. Goff has passed for 13 touchdowns, with six interceptions. He has been sacked 10 times. McVay is not expected to have Goff pass 61 times as he did two weeks ago in the defeat to the Dolphins, but he might be tempted because the Seahawks rank last in the NFL in pass defense and are without injured cornerbacks Shaquill Griffin and Quinton Dunbar. Wide receiver Cooper Kupp was limited this week because of oblique and wrist injuries, but he will play against the Seahawks. Tight end Tyler Higbee has said that the left-hand injury that forced him to sit out one game and limited his effectiveness against the Dolphins is no longer an issue. Running back Darrell Henderson was limited most of the week because of a quadriceps injury but is expected to play, McVay said. Seahawks linebackers Bobby Wagner and K.J. Wright are longtime veterans for a unit that includes star safety Jamal Adams. Wright is questionable because of an ankle injury. The Seahawks acquired edge rusher Carlos Dunlap a few weeks ago to help provide more pressure. Adams and defensive lineman Jarran Reed both have 3½ sacks.

When Seahawks have the ball: Russell Wilson has passed for a league-leading 28 touchdowns, with eight interceptions, in the NFL’s highest-scoring offense. Wide receivers Tyler Lockett, DK Metcalf and David Moore are one of the most dynamic combinations the quarterback has worked with since Wilson was selected in the third round of the 2012 draft. With Chris Carson and Carlos Hyde out because of foot and hamstring injuries, DeeJay Dallas could start at running back. Tight ends Greg Olsen, Will Dissly and Jacob Hollister are other targets for Wilson. The Rams are looking to take advantage of a Seahawks offensive line that will include Kyle Fuller starting at center in place of Ethan Pocic, who is sidelined because of a concussion. Fuller will have the task of dealing with Rams star lineman Aaron Donald, who has nine sacks this season and 12 in his career against the Seahawks. Tackle A’Shawn Robinson, on the non-injury football list the first half of the season, is expected to make his Rams debut. Safety Jordan Fuller has returned from injured reserve after sitting out three games because of a shoulder injury. The matchup between Metcalf and Rams cornerback Jalen Ramsey will be one to watch.

When they kick: In his first game with the Rams, Kai Forbath kicked a 23-yard field goal and badly missed a 48-yard attempt. McVay said the miss would not cause him to replace Forbath with practice-squad kicker Austin MacGinnis, but Forbath cannot afford to falter. Seahawks kicker Jason Myers has made all seven of his field-goal attempts.

Gary Klein’s prediction: The Rams’ defense has played well, but it has not proved itself against an opponent with a high-powered offense. Wilson and his receivers offer the ultimate challenge.