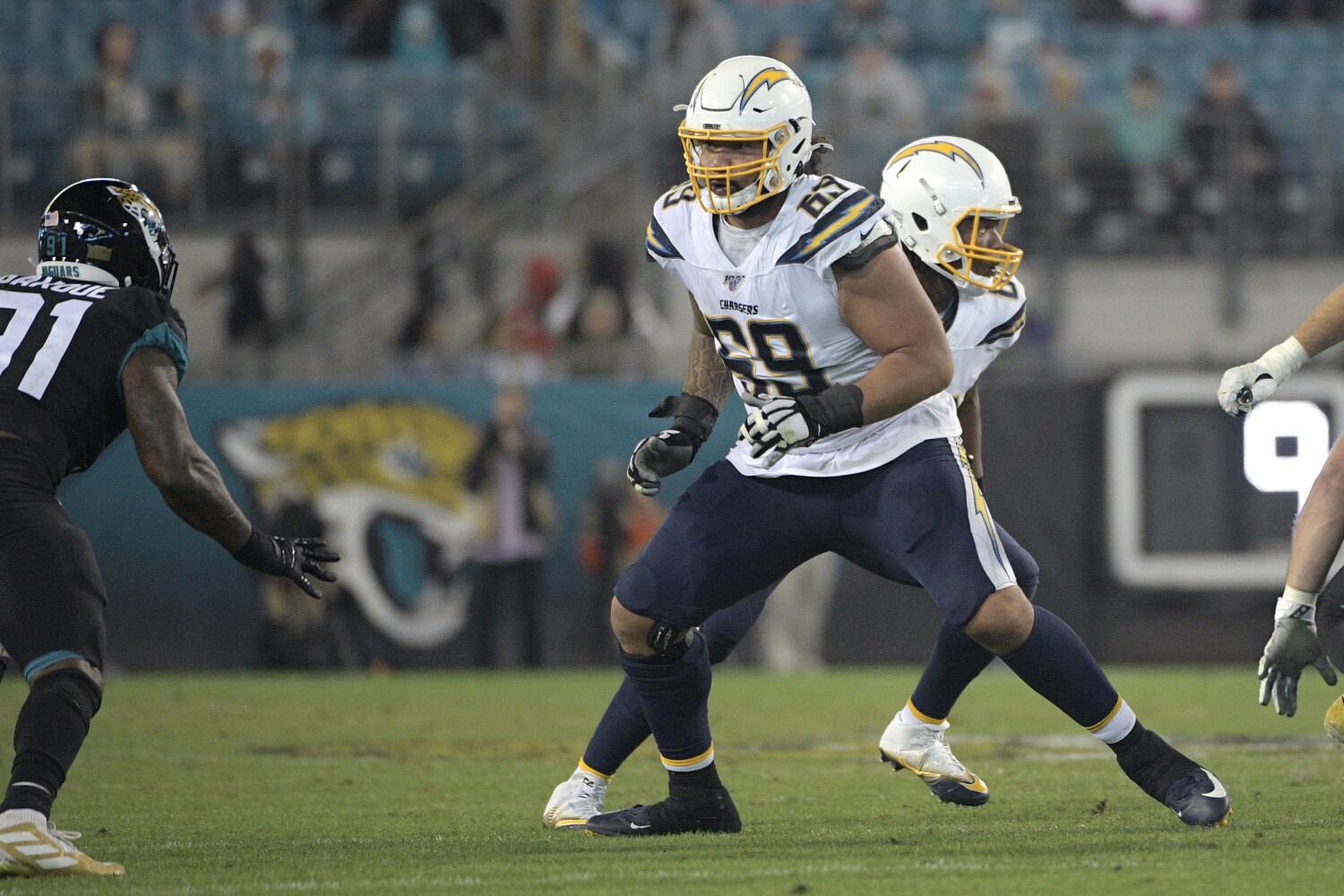 Even before the first formal day of training camp, the Chargers’ most unsettled position belongs to Sam Tevi.

Coach Anthony Lynn said the fourth-year offensive lineman is “in the driver’s seat” for the starting left tackle job.

“Sam’s been in the system,” Lynn said. “He’s played both sides for us. He’s played more.”

The Chargers are looking for a replacement for Russell Okung, who was traded to Carolina in the offseason after struggling with health issues last year.

Pipkins has been slowed of late by a right knee issue. Lynn said Pipkins “had a minor setback a few days ago…he’s working through it.”

Tevi and Pipkins were expected to battle for the left tackle spot throughout camp. For now, the starting job belongs to the more experienced of the two.

“We’ll put those guys in some competitive situations and we’ll see how they respond,” Lynn said. “But I feel good about Sam.”

At this point, the Chargers have no plans of moving guard Forrest Lamp outside to tackle. A highly touted second-round pick in 2017, Lamp has been limited in his career to nine games — two starts — because of injury.

“We gotta make sure Forrest can compete at one spot before we start trying to teach him two spots,” Lynn said. “I know he played left tackle in college [at Western Kentucky], but that’s college. [It’s] a little different game up here.

“I’m not saying that he can’t do it, but I like Forrest inside before he got hurt a few years ago. No doubt he can be a starting guard in this league.”

Lynn said the Chargers could eventually try Lamp at tackle to see how he handles the position.

Friday was the first time Lynn spoke publicly after it was revealed this week on “Hard Knocks” that he had tested positive for COVID-19.

The positive test came in June, Lynn explaining that he experienced a cough and body aches.

“I was trying to explain and get across to my team that you can’t be too careful with these protocols because anyone who knows me knows I take this virus very seriously,” he said. “I feel very fortunate. The 1% who do die…you don’t think much about it until you get it. I just wanted to get that across to my team.”

Defensive end Melvin Ingram did not participate Friday afternoon in the Chargers’ first practice at their training camp site.

Lynn downplayed Ingram’s situation indicating it was nothing serious. He wouldn’t specify if Ingram sat out for health reasons, instead calling it “just company business.”

Ingram has made the Pro Bowl three consecutive years. He is entering the final season of a four-year, $64-million deal he signed in June 2017.

The Chargers will conduct their camp in Costa Mesa, a short drive from their training facility.

They’ve had limited time together because of the virtual-only offseason and now are hidden behind face masks even when they aren’t wearing their helmets.

“I don’t know like half of the team right now,” running back Austin Ekeler said, laughing. “On the offense, I’m just like, ‘I know your face, but I don’t know who you are. Are you drafted? Undrafted? Who are you?’ It’s bad right now.”

The NFL has set training camp rosters at 80, and 33 of those players for the Chargers weren’t on the team last year.