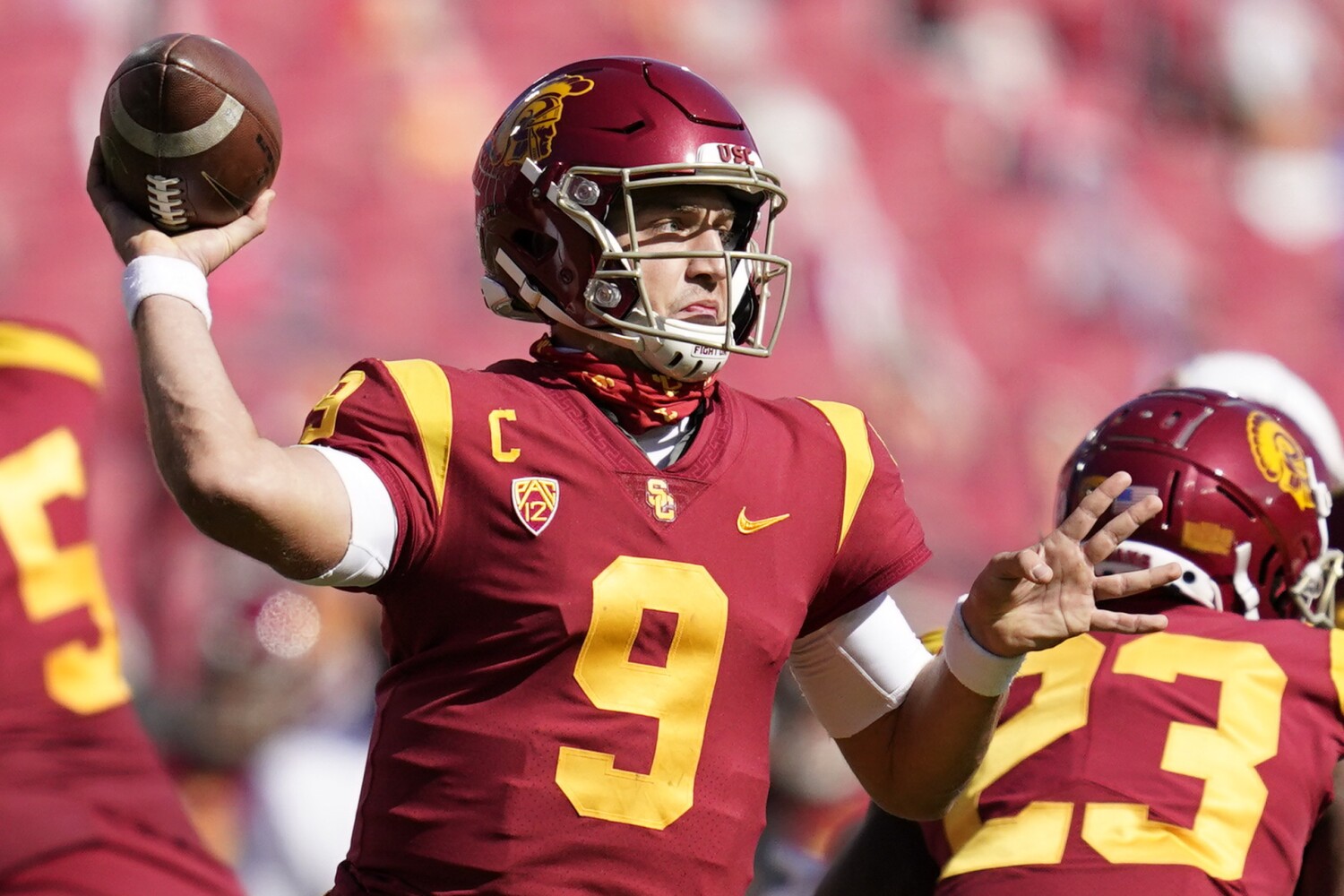 Kedon Slovis looked over to the sideline on fourth-and-nine, with USC’s season on the line, and relayed the message.

Graham Harrell had seen an opportunity. Two Arizona State safeties were split out wide to the hashmarks. So, with the clock ticking, the USC offensive coordinator made a decisive move. Amon-ra St. Brown shifted to give USC three receivers on the right side, pushing Drake London into the slot, matched with a linebacker. They’d run this play, out of this formation, more than most in his playbook. Harrell knew where it was going before the snap.

The next few seconds would not only deliver a stunning 28-27 comeback victory, but also offer a benchmark for the potential of USC’s offense in Harrell’s second year at the helm. Slovis, the stellar sophomore quarterback, delivered a dart at the perfect time, just behind the linebacker’s back shoulder. London, on his way to 125 receiving yards, ran a perfect route, pulling down Slovis’ pass in traffic. And Harrell knew that particular play, under those particular circumstances, was nearly foolproof.

“We got a chance to look at the coverage, call what we’re good at, and call a play that looks good against that coverage,” Harrell said. “If we can get Drake matched up on a linebacker-type player, that’s a win for us in our opinion. Kedon threw it with confidence and threw a good ball, and Drake made an unbelievable catch.”

The young coordinator has long promised that his USC offense would take a major leap in Year 2. At North Texas, he’d orchestrated a huge improvement from 114th in yards per play in his first season to 36th in his second, largely thanks to improved play from his quarterback, Mason Fine.

In Slovis, it was hard to imagine such a major upgrade from a season that set the NCAA record for completion percentage as a freshman passer. But on Saturday, there were signs of improvements more subtle than a game-winning pass.

Last September, in his first road trip, BYU rattled Slovis when it dropped eight into coverage, daring him to throw into tight windows. On Saturday, when Arizona State followed a similar blueprint, Slovis stayed patient, dinking and dunking with short passes, rather than taking risks in tight coverage.

Thirteen of his 40 completions would be caught within 10 yards of the line of scrimmage. At one point, he completed 12 straight, nine of which went for seven or fewer yards. That caution was exactly what Clay Helton hoped to see out of his quarterback.

“Instead of forcing the ball, he checked it down to the back,” USC’s coach said. “That may only be four, six yards, seven yards. Sometimes, it was 10. But it’s where his growth has gone, and that’s what I hope to see consistently. Where we saw those early turnovers last year, that really hurt us from the quarterback position.”

It was hardly a perfect game from Slovis, even if he did set a USC record with 40 completions for a total of 380 yards. He had one pass intercepted, when, as Harrell pointed out, a checkdown would have sufficed. But with defenses sure to focus entire game plans on trying to stop him, the sophomore’s patience was a positive in the eyes of his offensive coordinator.

“When we drop back I would imagine a lot of people’s goal will be to get soft and try to take away explosives,” Harrell said. “When they do, you’ve got to be disciplined enough not to turn the football over and check it down.”

London’s apparent leap was less subtle Saturday. He played 93 of 97 possible snaps, according to Pro Football Focus, far more than he ever had previously.

There was an obvious reason for that influx: The sophomore was USC’s most explosive downfield threat, with five of his eight receptions going for 15 yards or more.

“He’s developed more as a route runner,” senior wideout Tyler Vaughns said. “He’s taken his time to craft himself throughout this offseason just to get better at that, and it shows. He’s making moves, and he’s getting open easily.”

As he deftly slipped between two Arizona State defenders, London was only open for a moment on that final touchdown. But it was inside that narrow window that Slovis pulled the trigger and completed the comeback, offering a glimpse of what USC’s offense, at its best, might be in 2020.

Chico is the man in Dodgers’ intrasquad games