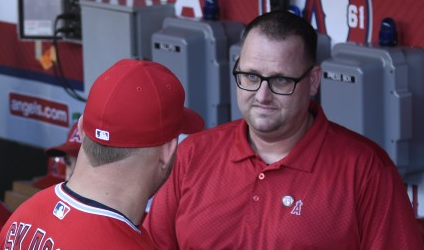 The trial of former Angels employee Eric Kay in connection with pitcher Tyler Skaggs’ overdose death has been delayed until next year after one of the attorneys involved contracted the novel coronavirus.

In an order filed Friday, U.S. District Judge Terry R. Means rescheduled the trial for April 19 in Fort Worth, Texas. The trial previously had been set for Dec. 14.

Kay’s Texas-based attorney, William Reagan Wynn, said in a joint motion filed last week that he was diagnosed with COVID-19 on Oct. 28 and has been quarantined at home.

“Additionally, because he remains symptomatic, undersigned counsel is currently unable to devote the necessary time and effort to adequately prepare this case for trial next month,” the joint motion said.

A grand jury indicted Kay last month on felony charges of distributing the fentanyl that led to Skaggs’ death and conspiring to “possess with the intent to distribute” the opioid “beginning in or before 2017.”

Kay, who worked in the Angels’ media relations department for more than two decades, has pleaded not guilty.

Skaggs died July 1, 2019, in his hotel room in Southlake, Texas. The Tarrant County medical examiner attributed the death to “alcohol, fentanyl and oxycodone intoxication with terminal aspiration of gastric contents.”

“It was later determined that but for the fentanyl in [Skaggs’] system, [he] would not have died,” Geoffrey Lindenberg, a Drug Enforcement Administration special agent, wrote in an affidavit supporting the criminal complaint against Kay.

Authorities found a counterfeit oxycodone pill containing fentanyl in the hotel room and “white residue” on the floor that tested positive for fentanyl.