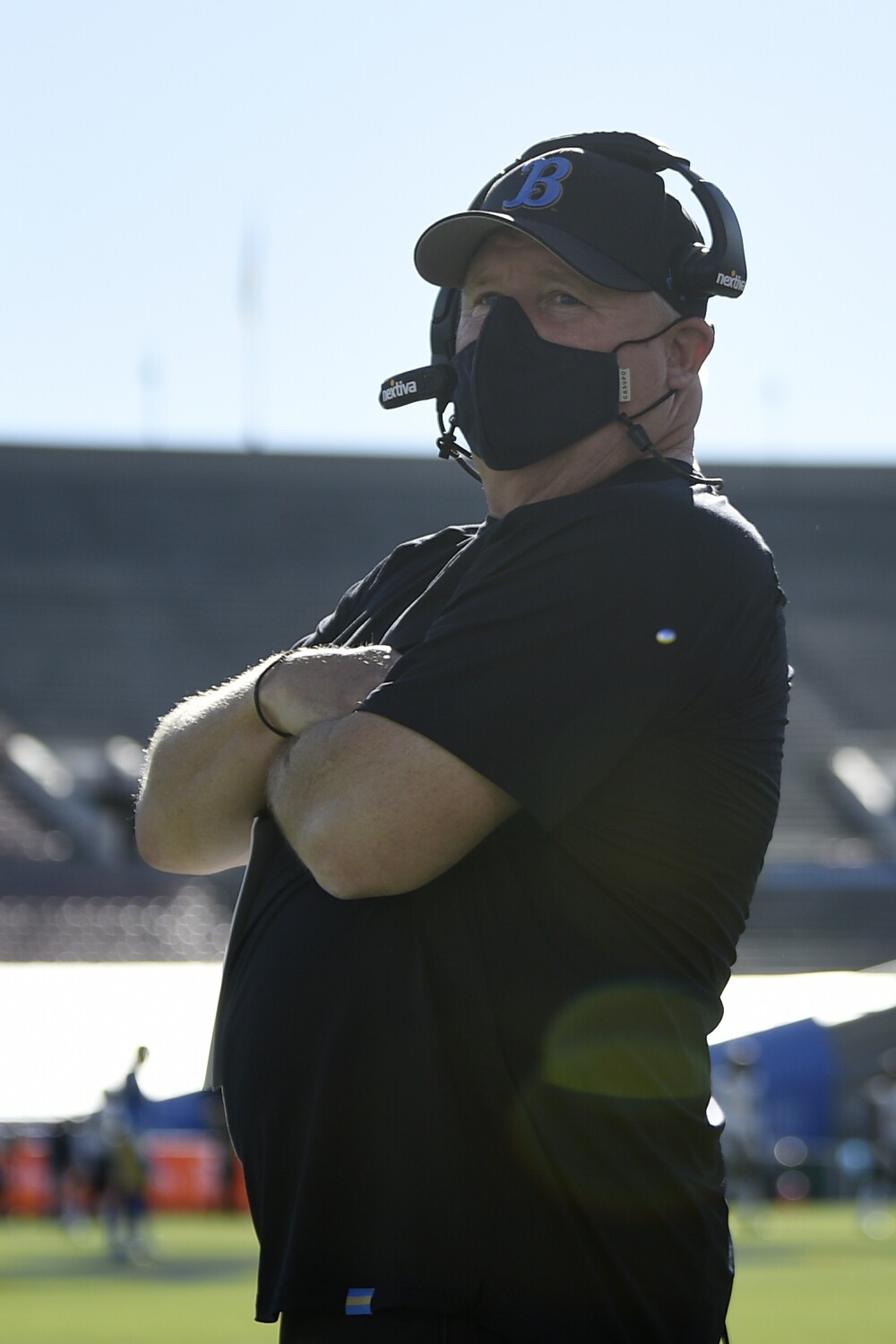 The game was supposed to provide a brutally honest assessment of Chip Kelly in his third season at UCLA.

If Dorian Thompson-Robinson, the Pac-12’s most experienced quarterback, is unable to play Saturday against No. 11 Oregon because of COVID-19 issues, two facets of Kelly’s work will remain on high-definition display during the ESPN2 broadcast.

His recruiting and roster management.

Based on his injury history, Thompson-Robinson was unlikely to make it through a full season even before his status was jeopardized by two positive tests for the novel coronavirus among players, coaches and staff and a resulting quarantine of other players through contact tracing. UCLA also announced it had three positive tests from athletics support staff as well as two additional positives within the athletic department, one of which was verified as a false positive and another awaiting confirmation PCR testing.

Thompson-Robinson declared “I do NOT have Covid-19! lol” on Twitter on Friday evening, implying that if he was being held out of the game against Oregon it was because of contact tracing. As part of safety protocols, anyone deemed to have come in close contact with someone who tested positive is forced into quarantine for 14 days from the last date of contact. Thompson-Robinson deleted his tweet but sent another denying he has the virus.

He missed one full game and parts of four others because of injuries during his first two college seasons, providing an obvious need for a seasoned backup heading into 2020.

Yet Kelly entered the season without anyone on his roster besides Thompson-Robinson who had thrown a pass at the college level. The backups were two redshirt freshmen and a freshman who had thrown just 92 passes as a high school senior.

“Every snap is a new experience for them and they’re taking full advantage of it,” Kelly said last month. “They’re strong, they pick things up quickly, it’s just a matter of trying to get them all reps.”

Redshirt freshman Chase Griffin managed the final drive against California last weekend, making him the presumptive starter for the Bruins (1-1) against the Ducks (2-0) if Thompson-Robinson is unable to play, but he did not put the ball in the air. He handed off twice and ran once, gaining one yard.

Griffin piled up big numbers as a high school senior, throwing for 4,051 yards and 51 touchdowns. He was the Gatorade Texas state player of the year, but his numbers and his accolades couldn’t sway major college recruiters who questioned his size. Griffin drew interest from North Texas and Ivy League schools before joining the Bruins.

He’s listed at 5 feet 11 and 184 pounds, making him an undersized overachiever who could add his name to the list of UCLA backup quarterbacks who became saviors. Norman Dow helped the Bruins beat USC in 1966, John Barnes came out of nowhere to top the Trojans in 1992 and Jerry Neuheisel two-stepped all over Texas in 2014.

Neuheisel could give Griffin a pregame pep talk at Autzen Stadium considering he remains with the Bruins as a graduate assistant. So could Wayne Cook, the UCLA radio sideline reporter who was among a string of Bruins quarterbacks who went down in 1992, giving way to Barnes.

Kelly’s two other options at quarterback are Chase Artopoeus, a redshirt freshman walk-on, and Colson Yankoff, a highly regarded prospect whom Kelly allowed to move to wide receiver in training camp despite his standing as the team’s top backup to Thompson-Robinson.

Yankoff told Kelly he just wanted to get on the field … and funny how things work out, right? Kelly said last month that Yankoff would not split his practice and preparation time between wide receiver and quarterback as an insurance policy against Thompson-Robinson getting hurt because it would be detrimental to Yankoff’s bid to play wide receiver.

Yankoff was a four-star high school prospect who spent his first college season at Washington before his arrival in Westwood. Kelly said the Huskies blocked Yankoff’s attempt for immediate eligibility with the Bruins last season but Washington disputed that account, saying it followed the usual procedure for intra-conference transfers.

If anyone other than Thompson-Robinson takes the first snap against the Ducks, his top responsibility could be handing the ball off to tailbacks Demetric Felton Jr. and Brittain Brown as part of a run-heavy approach designed to help alleviate the pressure on him.

Kelly likes to say that one of the best abilities is availability. Without Thompson-Robinson, the availability of a capable backup would be perhaps the most meaningful takeaway of Kelly’s time with the Bruins.