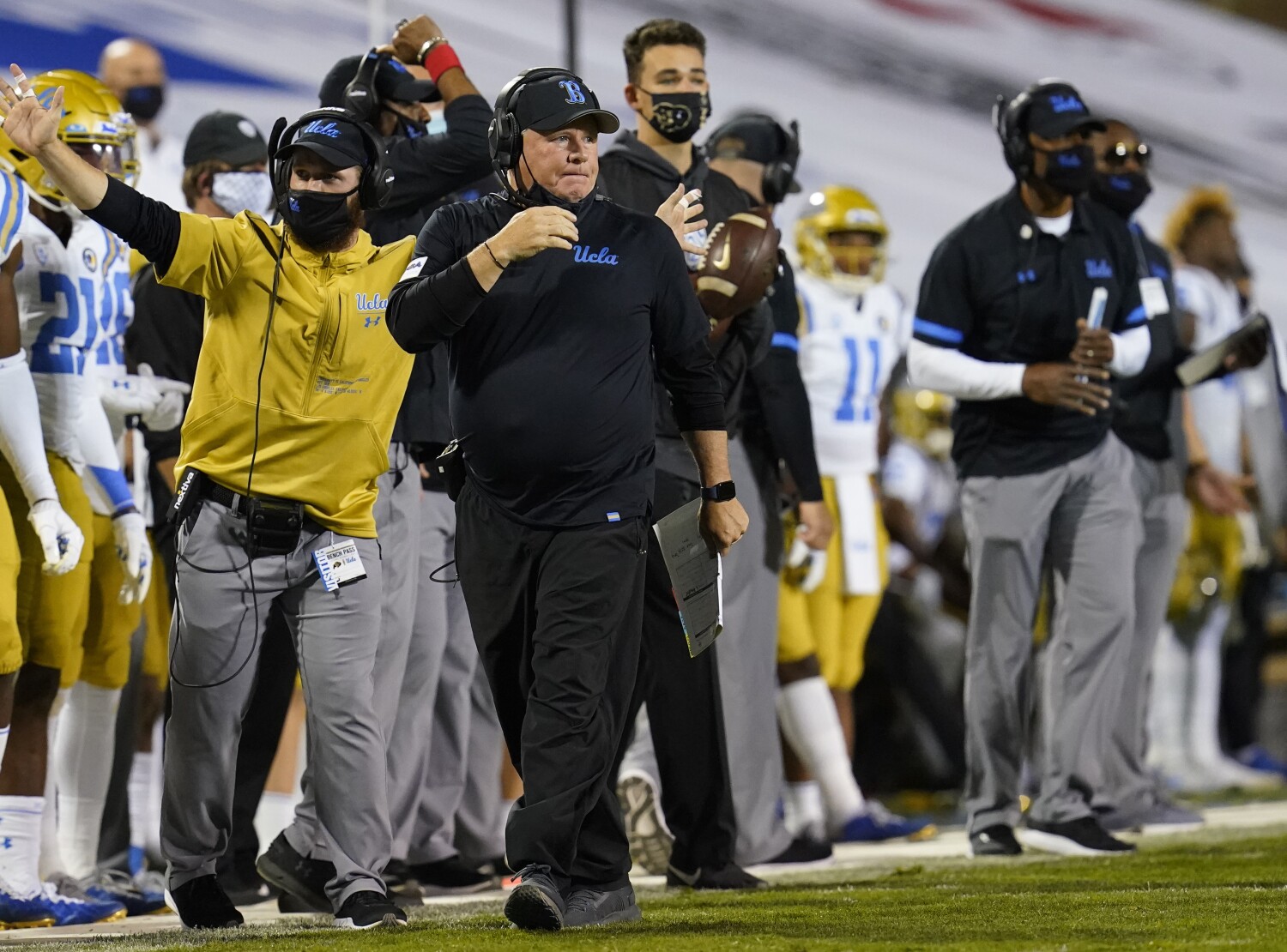 It felt as if the Pac-12 Conference might have reached its Rudy Gobert moment, a season on the brink similar to the NBA after the Utah Jazz star’s positive coronavirus test precipitated the widespread shutdown of sports.

By Friday afternoon, the Pac-12 had canceled four football games, matching the number it had staged and illustrating the lunacy of the whole endeavor amid an unrelenting COVID-19 pandemic.

To play or not to play, that is the existential question confronting UCLA and its conference brethren until dastardly terms such as “contact tracing” and “quarantine” disappear from game week preparations that can feel like studying for a test that might get called off before walking through the classroom door.

Who knows what changes might come next? The Pac-12 schedule might as well be written in Malibu sand, inches from the surf rolling in at high tide.

In a fascinating twist, the Bruins and Golden Bears are feeling fortunate to get to this moment, however tenuous.

UCLA (0-1) faced the prospect of its seven-game, conference-only season shrinking to six when Utah was forced to call off a game for the second consecutive week because of issues related to the coronavirus.

Cal’s situation was more confounding. The Golden Bears (0-0) endured a second straight cancellation Friday despite having only one player who had tested positive. Cal’s opener had been wiped out by strict contact tracing protocols ordered by local health officials and its game scheduled for Saturday against Arizona State was declared a no-contest because of positives involving the Sun Devils, including coach Herm Edwards.

Thankfully, Cal officials called a quick audible in concert with their UCLA counterparts, refueling the equipment truck and setting the GPS for the Rose Bowl.

There remained no assurances the rescheduled game requiring a wakeup call before sunrise would go forward. The Bruins and Golden Bears each needed to clear several rounds of testing before being allowed to resume a rivalry that has been played every year since 1933 but was not on either team’s original 2020 schedule.

The joke going around UCLA message boards earlier this week was that the Bruins’ best hope for a victory at the Rose Bowl was for a cancellation, so low were expectations after the team stumbled in a 48-42 season-opening loss to Colorado.

UCLA didn’t know who would take the field for Utah and the same holds true for Cal given the Golden Bears haven’t played and the status of their players in quarantine remained unclear. It was expected, however, that at least some would be allowed to play Sunday.

“They have no tape this year,” UCLA coach Chip Kelly said of the Utes in a quote that also applied to the Golden Bears, “so it’s not like you can watch this year’s game and say, ‘Hey, these are the guys that are playing.’ ”

The Bruins were granted an additional practice Saturday after discarding their Utah game prep like a used box-lunch container. Asked earlier in the week about anxiety created by the lingering uncertainty, UCLA quarterback Dorian Thompson-Robinson said he would calmly handle any challenges that arose.

“I have no worries,” Thompson-Robinson said. “Just like in quarantine I had no worries then. I’m taking it day by day and focusing on the next day at hand.”

In these strange days, the next day could bring a new opponent at a new time.