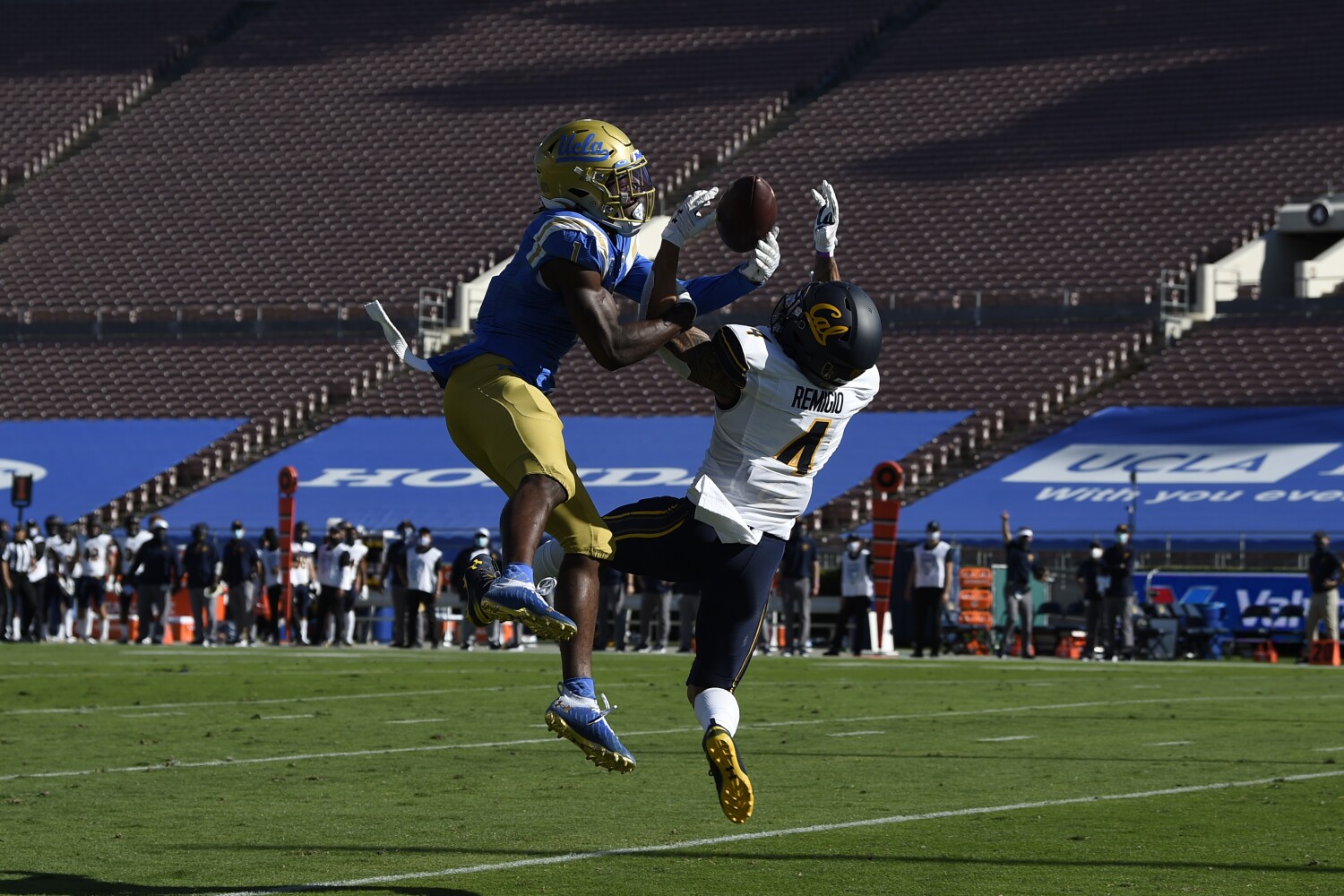 “Operation Warp Speed” took on a new meaning for UCLA this week.

As COVID-19 canceled or postponed more than a dozen college football games nationally this weekend, UCLA had just 44 hours to prepare for a new opponent. The Bruins made the best of each moment as they successfully shifted gears Sunday to still stymie an un-scouted California offense in a 34-10 win at the Rose Bowl.

UCLA (1-1) spoiled the debut of Cal’s new offense under first-year coordinator Bill Musgrave, former coordinator for the Denver Broncos, as the Bruins allowed just 176 total yards and shut out the Bears (0-1) in the second half. It was the third time since 2009 that the Bruins held an opponent under 200 yards, the other two happening last season.

“The offense can only do so many things,” said linebacker Caleb Johnson, who added the Bruins found similarities to the Broncos’ offense when Cal unveiled its scheme throughout the game. “We know how to read the offensive guards [and] tackles, we gotta trust our reads and just do what we’ve been drilling for a few months.”

The Bruins didn’t learn of their Sunday morning matchup until Friday at 1 p.m. after positive COVID-19 tests among Utah’s team forced the Pac-12 to cancel UCLA’s original home opener. Cal was left opponent-less when Arizona State had to withdraw because of an outbreak.

Having faced the Bears in the final game of last season, the Bruins relied on what they knew of head coach Justin Wilcox’s defensive acumen, pared their offensive game plan and focused on aspects that proved successful against Colorado last weekend.

The defensive assignment was more daunting.

With a new coordinator and no new tape to study after Cal’s initial opener was canceled because of one positive COVID-19 test on the team and subsequent contact tracing, the Bruins mined old game film of the 2018 Denver Broncos, where Musgrave last was the quarterbacks coach and offensive coordinator. When the game unfolded, the Bruins found similarities between the schemes, but solutions came mostly through old standbys: play fast, play hard, be physical.

Unlike Cal, the Bruins had the benefit of playing one game this season. UCLA released early-season jitters in last week’s loss to Colorado, where the Buffaloes ran up 525 yards and scored seven touchdowns.

“We knew what we needed to do, but we weren’t necessarily doing them,” Johnson said of last week’s performance. “I feel like we’re getting more comfortable, knowing our jobs and trusting our teammates. Trusting that everybody else is going to do their jobs as a defense.”

Johnson, a junior college transfer from Fullerton College, starred for UCLA’s aggressive defense by crashing the backfield for 2.5 tackles for loss and 1.5 sacks and grabbing an interception on a tipped pass in the second half. It was UCLA’s first takeaway of the season and the first time UCLA shut out an opponent in a half since 2018, also against Cal.

Instead of thunderous applause from a success-starved home crowd, UCLA’s big plays were met with a drone of murmurs piped into the empty Rose Bowl. The sound of the artificial crowd was little more than white noise as the game was devoid of its usual flair, but after nearly not playing at all this weekend, even returning to an empty stadium was sweet for the Bruins.

“We’re just grateful that we get an opportunity to play,” head coach Chip Kelly said. “What’s going on in COVID in this country, it’s kind of crazy, and I don’t know what the future holds, so every opportunity you get to go play football in a safe environment — and that’s the one thing we ask all the time — as long as it’s going to be safe, we’ll go play.”