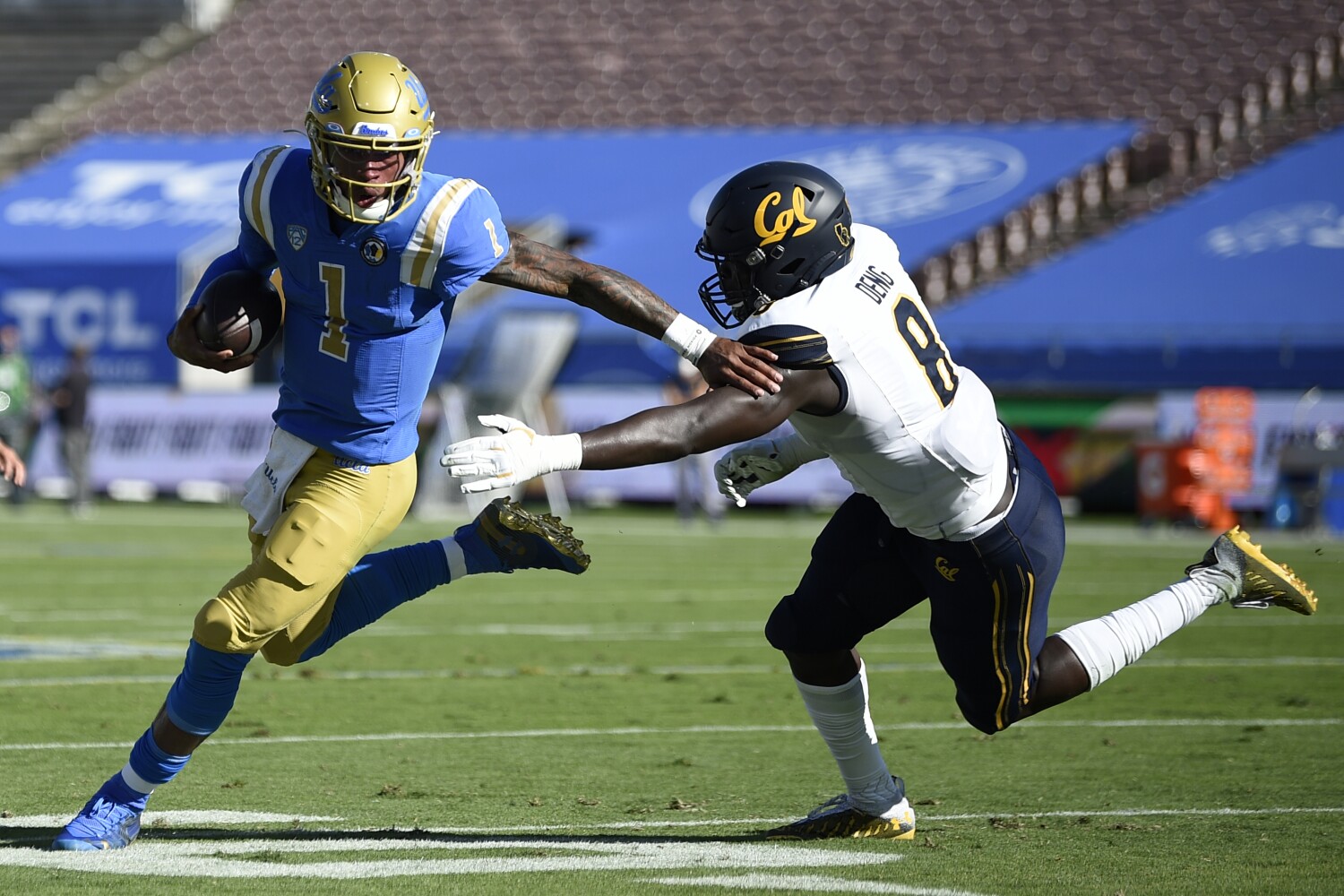 Game or no game, it was going to be a weekend to remember.

Dorian Thompson-Robinson’s mother and girlfriend had flown in for his 21st birthday, coming to see their favorite UCLA quarterback even if he was going to be idled with the Bruins’ home opener imperiled by COVID-19.

There was a celebration at Thompson-Robinson’s apartment with teammates on Friday, a day before his birthday on Saturday.

He came of age a day later.

In a vintage performance, Thompson-Robinson passed, ran and hurdled the Bruins to a 34-10 victory over California on Sunday at the Rose Bowl.

His stats didn’t fully tell the story. Thompson-Robinson completed 14 of 26 passes for 196 yards with three touchdowns and one interception while running for 52 yards in 12 carries with a touchdown.

It was his command of the Bruins’ quickened offense while keeping the Golden Bears on full alert with his running game that made for relatively relaxed afternoon viewing. Thompson-Robinson said the pace that UCLA decided to use after learning it would play Cal instead of Utah factored heavily into his success.

“Tempo helped out a lot,” Thompson-Robinson said, “and again, we found out early on that was going to be a big key in this game and so we used that to our advantage.”

Thompson-Robinson also put his feet to good use. He ran early and often, twice hurdling defenders while continuing to pile up yardage at a record pace. He has 161 rushing yards in two games compared to 198 last season and 266 prior to this season.

It helps that he’s been sacked only once in 2020 after being pulled down 53 times in his first two college seasons. He’s entering the ranks of the school’s all-time greats, placing ninth on the school’s career completion list with 362 and 10th on the career passing list with 4,511 yards.

He’d readily concede those numbers for a few more ticks in a more important category.

“It feels great to get a win, it feels like we’ve been fighting for that for a long time, fighting for this feeling,” Thompson-Robinson said. “Just doing anything and everything possible to get that win … on the board now.”

UCLA redshirt freshman wide receiver Charles Njoku’s first collegiate catch went for a 27-yard touchdown in the second quarter to put the Bruins ahead 14-3. … UCLA’s defense has made 17 tackles for loss in two games, an average of 8.5 per game that’s well above last season’s average of six per game.

Clippers’ Lou Williams knows his role on and off the court