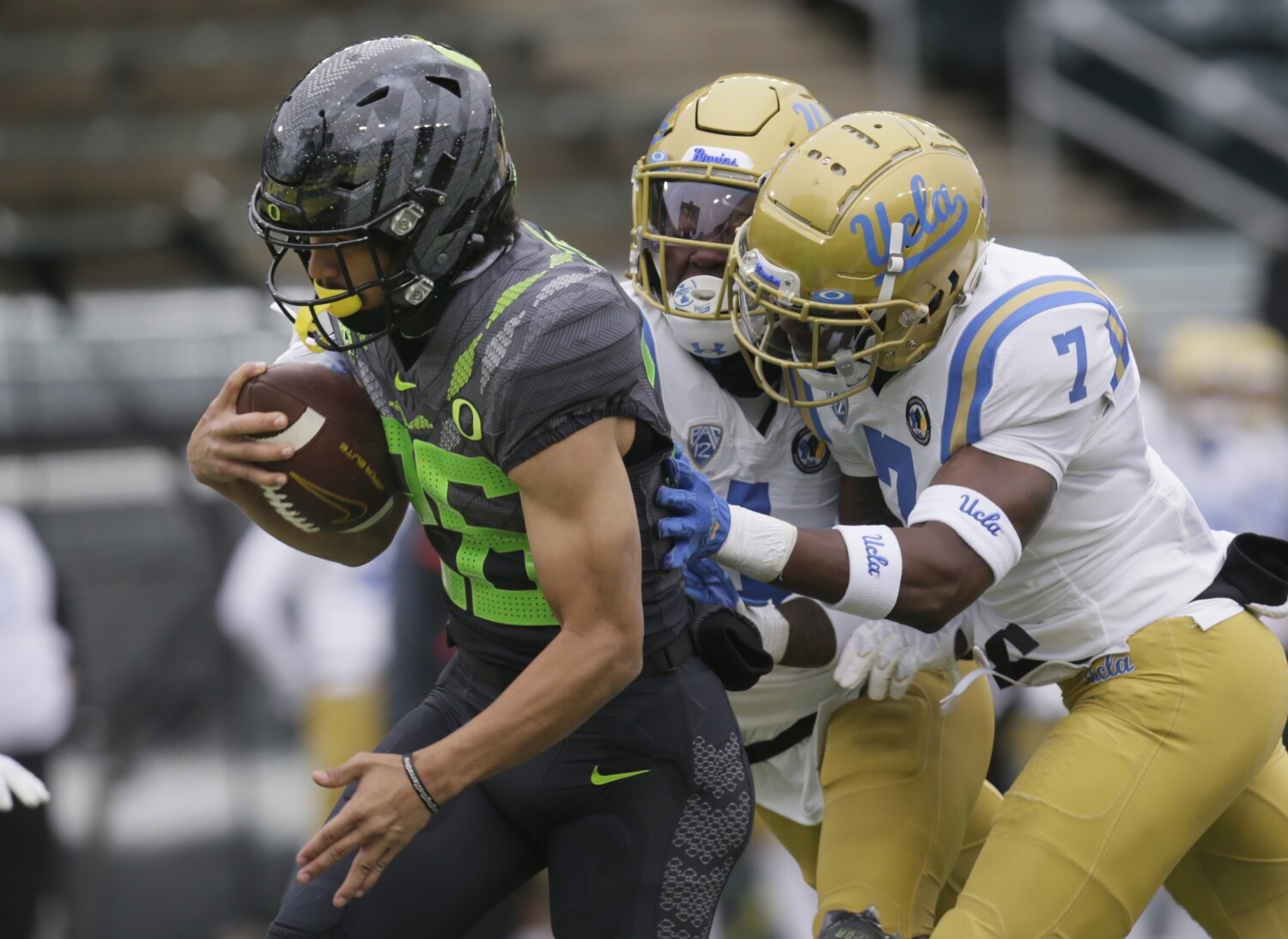 What was shaping up as a possible storybook Saturday for Chase Griffin came with a sad ending.

Making his first college start, the UCLA redshirt freshman quarterback led his short-handed team to the brink of an upset over No. 11 Oregon before the Ducks rallied for a 38-35 victory at Autzen Stadium.

Running back Demetric Felton Jr. kept the Bruins within striking distance when he ran for a 12-yard touchdown to pull them within 38-35. UCLA forced Oregon to punt after a four-play drive, getting the ball back at its 19-yard line with 77 seconds left in the game.

Griffin guided the Bruins into Oregon territory, picking up three first downs, before Kyle Philips couldn’t haul in a fourth-down pass near the 20-yard line.

Oregon (3-0) pulled away from the Bruins (1-2) after overcoming a 21-17 deficit late in the second quarter, helping itself with a wild sequence on the final play of the first half.

With UCLA trying to build on its lead with a Hail Mary, Griffin was hit as he threw and Oregon’s Jordan Happle intercepted the pass, returning it 58 yards for a touchdown that gave the Ducks a 24-21 lead. It was one of four turnovers for the Bruins, who never regained the lead.

UCLA was without nine players, including starting quarterback Dorian Thompson-Robinson, because of issues related to COVID-19 involving two positive tests and the quarantine of others through contact tracing.

Griffin managed the game’s early going in impressive fashion, completing his first seven passes and building his confidence as the Bruins nearly matched the Ducks score for score in the first half.

UCLA fought back from a crushing 23-second sequence in the first quarter in which fumbles by Griffin and Qwuantrezz Knight on consecutive plays led to back-to-back Oregon touchdowns and a 14-0 deficit for the Bruins.

Felton Jr. halved the deficit with a one-yard touchdown run and the disruptive Bruins defense forced a fumble when linebacker Mitchell Agude knocked the ball out of C.J. Verdell’s hands and Knight scooped up the ball and raced 20 yards for a touchdown that tied the score.

The Bruins took a 21-17 lead late in the second quarter when Griffin perfectly placed a 32-yard touchdown pass to tight end Greg Dulcich.

Griffin completed 19 of 31 passes for 195 yards with one touchdown and two interceptions. Felton ran for 167 yards and two touchdowns in 34 carries as UCLA outgained Oregon, 462-422, in total yardage.