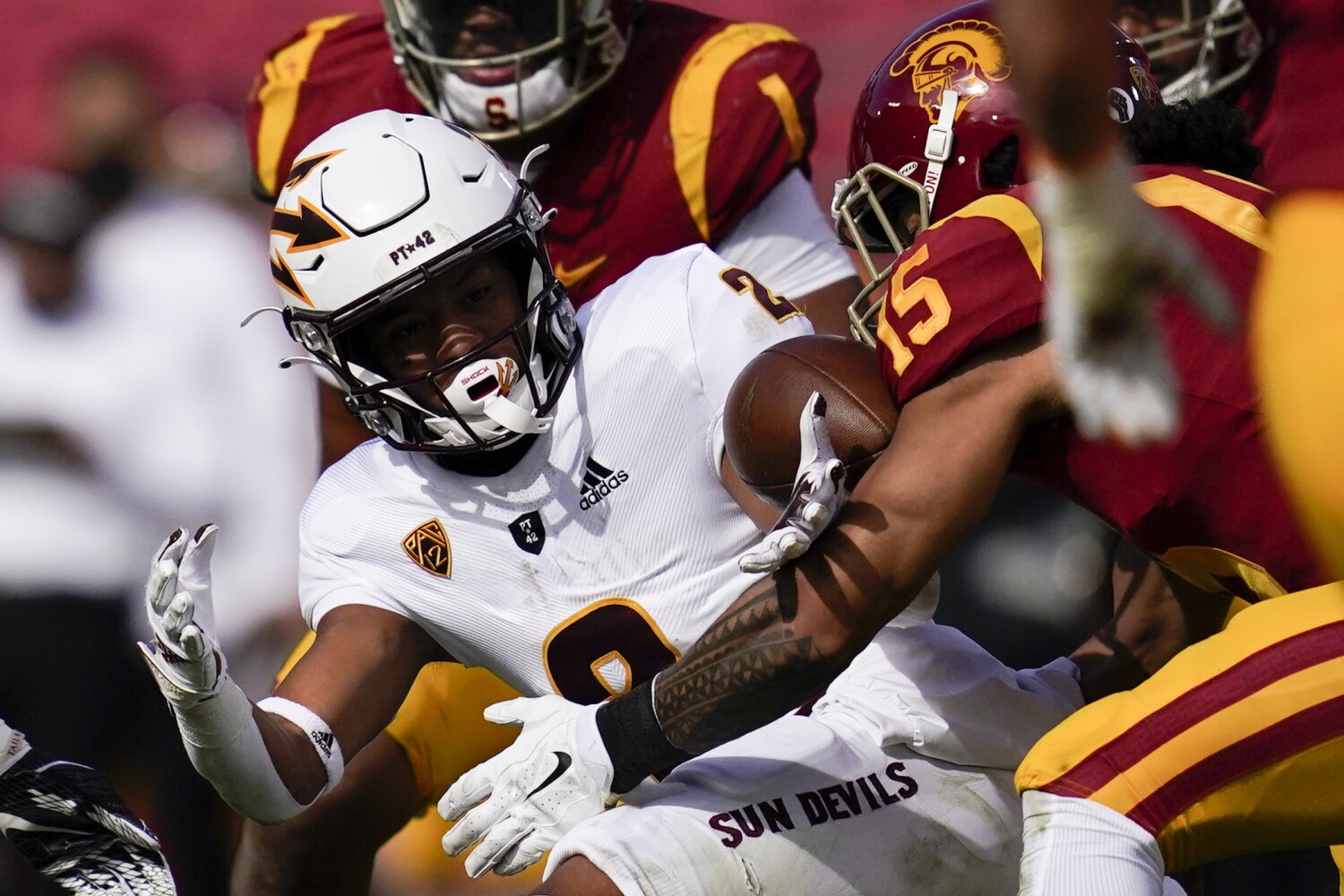 In the final minutes of his defense’s uneven debut, Todd Orlando needed something special.

USC (1-0) had already made too many mistakes, missed too many assignments. Arizona State had run rampant through three quarters. Nine second-half carries from the Sun Devils went for 10-plus yards; in total, the Trojans allowed 258 on the ground, including 111 from quarterback Jayden Daniels. The long layoff and lack of spring practice seemed more a detriment than Orlando anticipated.

Those compounding issues left the Trojans on the ropes with under five minutes remaining, trailing by two touchdowns. That’s when Marlon Tuipulotu broke through the line and threw Daniels to the ground on third down.

Through an otherwise inconsistent opening performance, the junior defensive tackle proved to be USC’s most reliable bright spot. He was a terror rushing from the interior, the only Trojan who consistently penetrated the pocket. Coach Clay Helton called him “a rock star.” The Pac-12 named him defensive lineman of the week.

Less effusive in his praise, Orlando referred to Tuipulotu’s eight-tackle performance as “the expectation.”

“With guys like Marlon, guys like [sophomore linebacker] Drake [Jackson], you’re looking for two to three special plays that are outside the norm,” Orlando said. “Really special players like that, that’s what they should do.”

Jackson, who dealt with a hamstring injury throughout camp, had a quieter debut than his interior counterpart, notching three tackles. But like Tuipulotu, he made his mark when the moment called for it.

On Arizona State’s final offensive play, with one stop standing between USC and a comeback victory, Jackson burst around the edge, ducked a Sun Devil lineman’s reach and delivered a crushing hit on Daniels, whose pass fluttered incomplete.

Helton called the play “one of the better pass rushes I’ve ever seen.”

Orlando said on Wednesday that he’d expected rust from the Trojans’ top pass rusher. “I was a little bit concerned he didn’t get a ton of live reps, but he’s such a dynamic player,” he said. “He did some things out there that were pretty special.”

Orlando wasn’t as kind in his assessment of the rest of his front seven. He took responsibility for USC’s glaring issues at linebacker, the position he was tasked with turning around.

He was blunt about USC’s defensive shortcomings in his debut as coordinator, but categorized most of the mistakes as correctable.

“We had a handful of plays that, you know, it’s the first ballgame,” Orlando said. “You train a certain way, and you’re hoping that when you get on the field that you just do what you trained. There were a couple plays out there that we just kind of lost our minds.”

Arizona will do its best to extend that confusion Saturday. The Wildcats have yet to play a game this season, but are known for their lightning-quick tempo on offense. And while they won’t have the dual run-pass threat of speedy former quarterback Khalil Tate, their run game, behind senior Gary Brightwell, should be a potent test for a USC defense that was run over last Saturday.

Stopping the run has long been a hallmark of Orlando’s defenses. At Utah State, his defense ranked eighth and 24th nationally against the run over his two seasons as coordinator. Both of his seasons as Houston’s defensive coordinator ended with the Cougars among the nation’s top eight run defenses. Before 2019, when his Texas defense finished 45th, his defenses had never finished worse than 28th in rushing yards allowed per game.

Orlando is confident he’ll have USC back on track soon enough.

“We’ve got to get better,” Orlando said. “It’s been emphasized. You watch the tape, and it’s all correctable stuff. It just goes back to some communication and doing some better things, that’s all.”