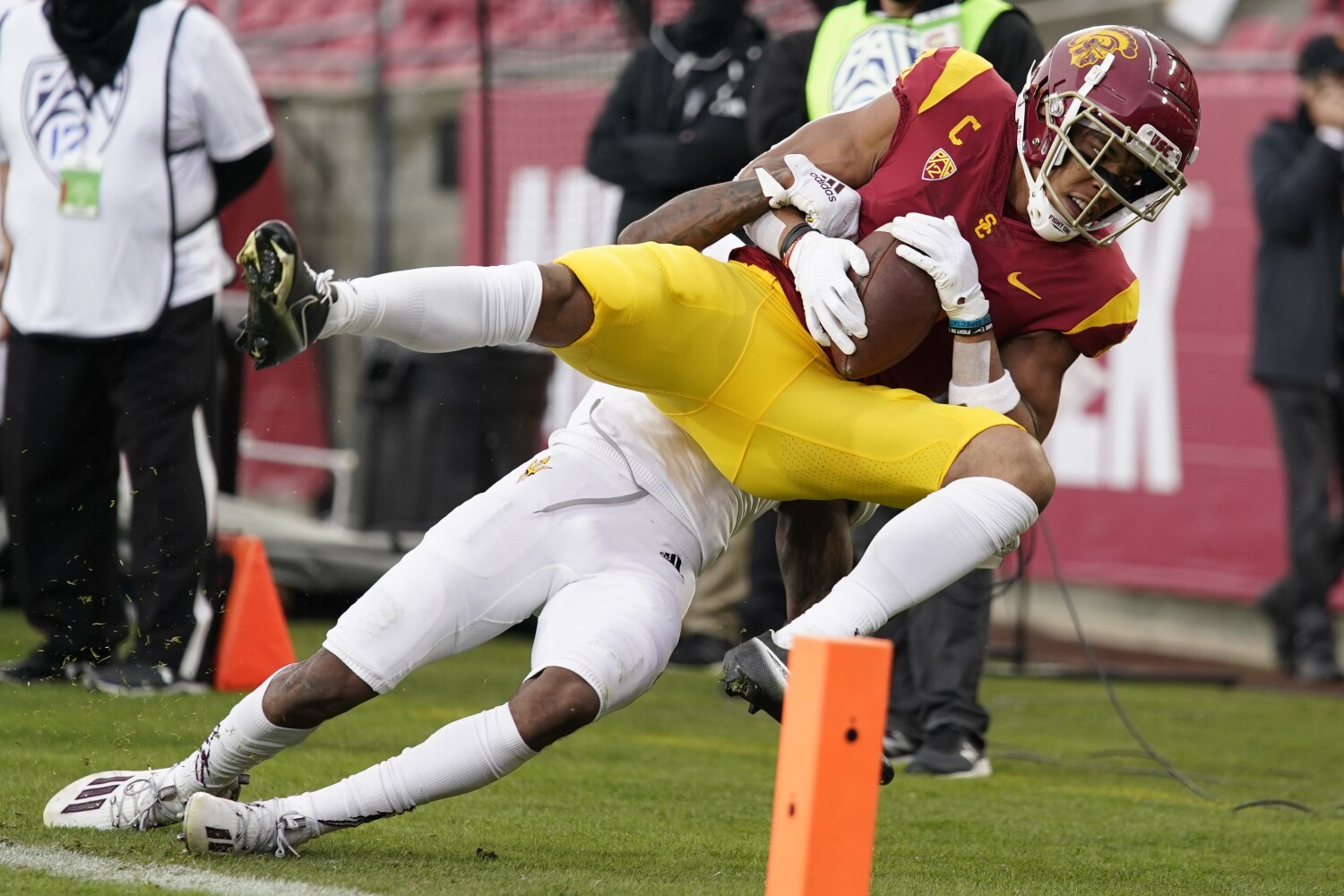 As UCLA and Utah canceled their clash at the Rose Bowl and Arizona State quarantined its coach and called off its game against California while another Pac-12 matchup between Oregon State and Washington weathered its own coronavirus concerns, USC boarded a plane for Tucson on Friday night with its fingers crossed.

With Pac-12 football again tiptoeing along the precipice, the Trojans’ first trip of the season already carried with it a thick layer of anxiety. Cases of COVID-19 continue to spike across the nation, including in California and Arizona. The college football season remains in a near-constant state of upheaval. In the Pac-12, as many games have been canceled, four, as have been played, and no one expects that delicate dance to cease any time soon.

Amid that uneasy backdrop, USC (1-0) is set to face Arizona in what may be one of the few Pac-12 games cleared for Saturday. Every member of USC’s travel party, which per conference rules can include 74 players and a maximum of 140, passed both antigen and PCR tests Thursday. Another round of antigen testing Friday turned up zero positive cases, and those who tested that morning remained at USC’s athletic facilities until a fleet of buses arrived to take them to the airport.

But as they waited, the rest of the conference’s Week 2 slate slipped into a state of chaos. At Utah, 28 players were being held out because of positive tests or contact tracing protocols, prompting the cancellation of its game against UCLA. A week that began with debates over strict contact tracing protocols in Berkeley ended with Cal losing its first game to an outbreak at Arizona State — until a makeup game was rescheduled on the fly with UCLA for Sunday morning.

The outbreak in Tempe arrived just days after the Sun Devils left Los Angeles. By Friday, Arizona State coach Herm Edwards and several of his players had tested positive and were in quarantine.

USC emerged from that matchup last Saturday without any positive cases, and a spokesman told The Times that additional safety protocols were necessary.

“There’s a lot of logistics to it,” USC football chief of staff Joseph Wood said. “The concerns are making sure there’s no interaction or very little interaction with anyone outside of our travel party.”

That high-wire act begins on the way to Arizona. For those attempting to maintain the program’s exhaustive safety protocols, the underlying tension will remain until they touch down in Los Angeles.

“We are getting the biggest plane you could possibly imagine,” USC coach Clay Helton said. “You don’t have boosters. You don’t have administration. You don’t have student managers. You only have the necessary, essential elements to go on this trip. It’s a big enough plane where we’re spacing between seats.”

Once they reach the team hotel, players will head to their individual rooms, where they’ll be served individual dinners. In the morning, they’ll do another round of antigen testing, eat another meal in their rooms, do a quick walk-through outdoors, and catch the bus to the stadium.

The game, by that point, might feel like the least-complicated part of the equation. Arizona hasn’t won a game in more than a year and has yet to play this season following the cancellation of its opener with Utah. It must replace dual-threat quarterback Khalil Tate with Grant Gunnell, while somehow improving a defense that ranked amongst the worst in the Pac-12 last season.

The stage is set for a smooth victory for USC, assuming it’s able to slow Arizona’s up-tempo offense.

From the final buzzer, the Trojans’ return is a tightrope walk. The team won’t spend any extra time in Tucson before flying home. The exposure to anyone outside the program is designed to be minimal, with only a hotel employee or flight attendant breaching the team bubble.

For USC, that bubble has remained almost entirely secure since the start of training camp. The football team has had just one positive case since the Pac-12 announced its return, according to a person familiar with USC’s testing results but not authorized to speak on the matter, and that player was injured and not practicing with the team.

But testing is only one method of mitigating the spread of the virus, and as evidenced by the Pac-12’s rash of canceled games, testing alone isn’t going to eradicate its impact on the football season.

“We certainly understand that we have to be perfect,” said Brandon Sosna, USC’s chief of staff and COVID-19 action chair. “That’s the expectation we’ve set.”

Even then, an outbreak on an opponent’s campus can just as easily steal a game away.

That could very well be the case for USC next week, when it’s scheduled to travel to Utah on Saturday night. The Utes have yet to play this season, and it’s still unclear when the 28 players currently in quarantine might be cleared.

It’s a waiting game the Pac-12 will have to play all season.

“At the time we made the decision to resume athletic competition, the United States was averaging somewhere in the range of 30,000-40,000 new cases per day,” Sosna said. “Now we’re up to 120,000-plus. Anyone would be naive to think that if there’s more COVID in the community that it wouldn’t affect us within our programs.”

Athletes and coaches look to make most of new CIF seasons