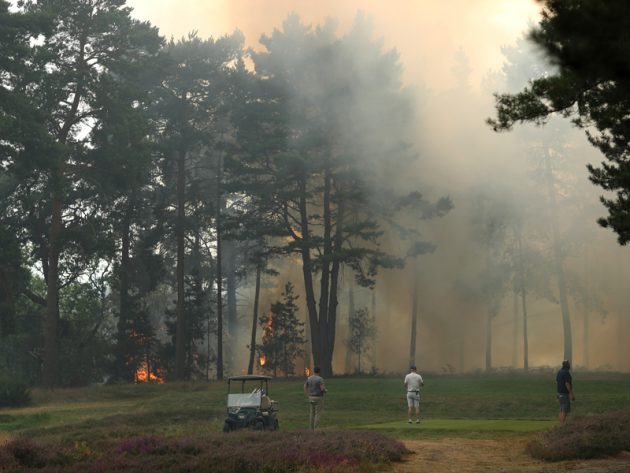 It has been brilliant to follow the Rose Ladies Series over the past couple of months but it looks like it may have come to a sad ending.

The final round of the three-event finale took place on Friday but was forced to be abandoned after huge wildfires in the local area spread to the course.

A wildfire from the nearby Chobham common spread over to the West Course at Wentworth and the course had to be evacuated.

It was hoped that play could recommence at 9.30am on Saturday morning but organisers have been forced to cancel due to the course remaining closed.

“With a heavy heart, the Major Incident Command Centre have closed Wentworth tomorrow due to the severity of the ongoing fire risk,” the Rose Ladies Series announced on social media.

“The Grand Final restart is cancelled until further notice. Most importantly, players, caddies & staff must be safe.”

It remains to be seen whether the final can come to a conclusion but there will be some scheduling headaches ahead.

The Ladies European Tour recommences next week with the Ladies Scottish Open and then it is the Women’s Open the following week.

The LPGA Tour is now also back up-and-running so both Georgia Hall and Charley Hull, who could win the Rose Ladies Series, may be keen to head Stateside.

Alice Hewson had a two stroke advantage over Charley Hull with seven holes played in the final round on the West Course.

Liz Young and Georgia Hall were one stroke further back.

Who Is Viktor Hovland’s Caddie?