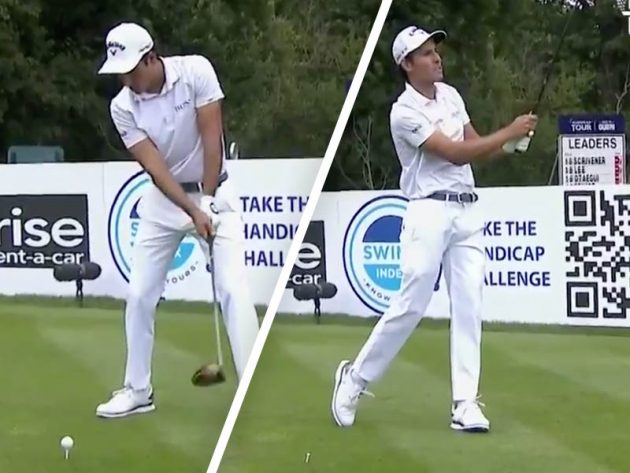 Swing drills are great and they help us create feels and hit nice shots whilst we practise.

However, one European Tour pro has put a swing drill into play during competition at this week’s English Championship.

We saw Padraig Harrington try out the ‘step drill’ in competition a couple of years ago and Carlos Pigem has gone for something perhaps even more unique.

The Spaniard starts his swing with the clubface hovering ahead of the ball, as oppose to behind it like 99.9% of golfers do.

He explained to the European Tour that he tried the drill with his woods and irons but was hitting everything much better so decided to try it in competition.

Watch Pigem explain his drill and the swing in question:

“That was starting like a drill when I was changing my swing last year,” he told the European Tour.

Related: Pro thrown out of English Championship after restaurant visit

“When I hit the drivers and the long irons I do that every time so the drill became a normal swing.

“That helps me start more with the ball than the hands, that was one of the mistakes when I used to swing.”

Pigem shot a two under par 69 in the opening round at Hanbury Manor.

He currently ranks 999th in the world and has won once as a pro, at the 2016 Yeangder Tournament Players Championship in Taiwan on the Asian Tour.

The European Tour’s third event of the UK Swing takes place at Hanbury Manor this week.

Up next are two events at Celtic Manor in Wales with the Celtic Classic and Wales Open before the UK Championship at The Belfry.

Romain Langasque On Life In The European Tour Bubble

Bryson DeChambeau What’s In The Bag?

ONE DAY ONLY: Save 50% On Golf Monthly Magazine Subscriptions