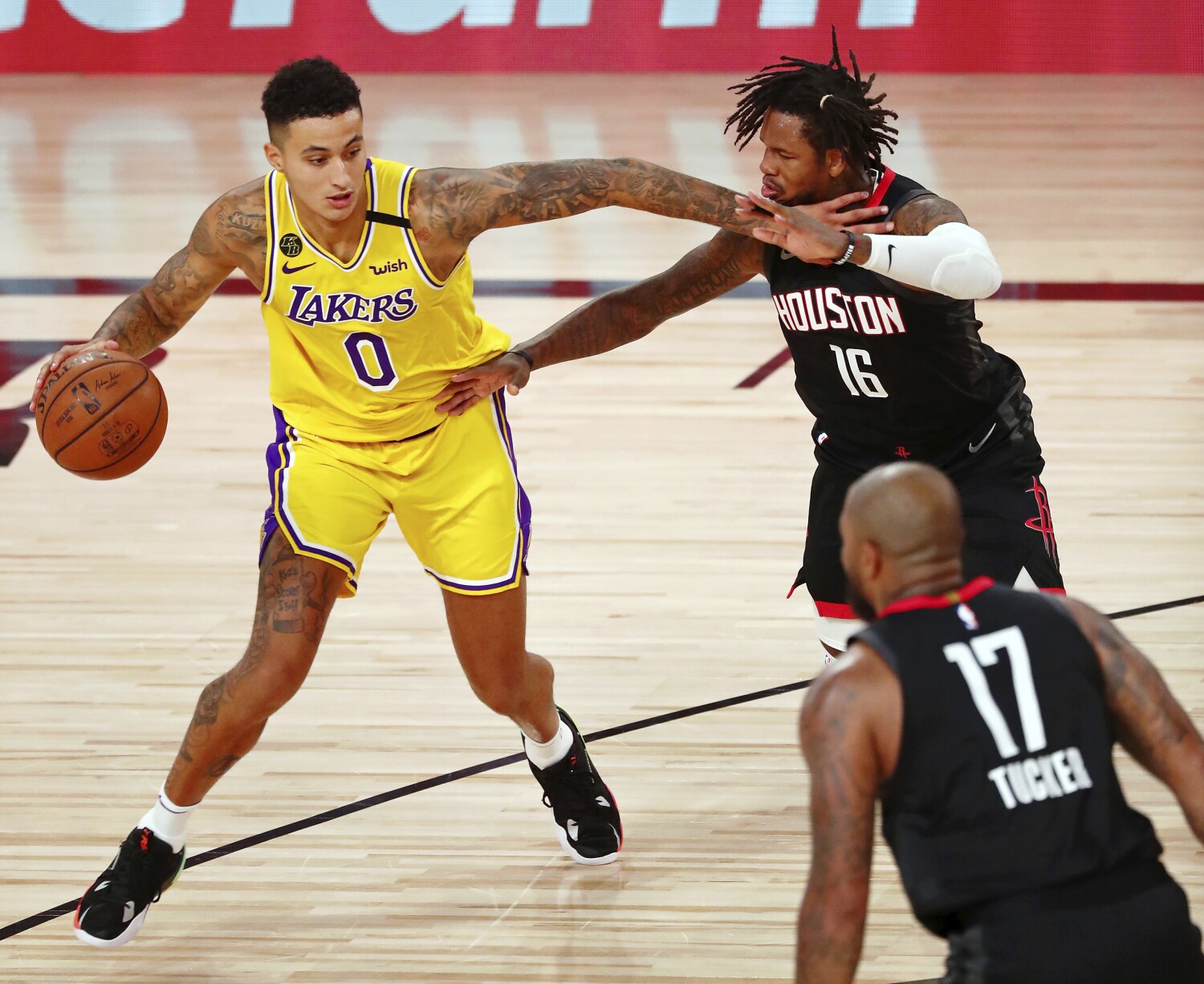 To panic or not seems to be on the minds of Lakers fans because of their team’s uneven play during the NBA’s restart.

Here are five reasons not to be dismayed with the Lakers after a 113-97 loss to the Houston Rockets on Thursday night in Orlando, Fla., and five reasons to be anxious after falling to 2-3 record in the seeding games.

Five things not to be alarmed about

1. Don’t worry about LeBron James not playing against the Rockets because of a sore groin. This was about resting him and not playing James in back-to-back games when the Lakers have already secured the best record in the Western Conference. James will be more than ready when the playoffs start Aug. 17. James will probably play in at least one of the final three seeding games. “He’s just dealing with some soreness,” Lakers coach Frank Vogel said on a Zoom call about James. “We’re playing it safe from a standpoint of a back-to-back.”

3. Perhaps Kyle Kuzma’s play against the Rockets showed that he can be that third option on offense the Lakers need. He started in place of James, allowing Kuzma the chance to showcase his talents. Kuzma had 21 points on eight-for-16 shooting. “Obviously when those guys are out, I get more playing time, I get more touches, I get more looks,” Kuzma said on a video conference call. “Obviously, there’s an opportunity there, but I’m not out here hoping one of those guys don’t play. I’m trying to win games. I’m just trying to do whatever I can to win games and help this team win a championship.”

4. The Lakers were good on the backboards again against the Rockets. The Lakers had 49 rebounds, 13 offensively. Those rebounds have been a big part of their offense.

5. Lakers rookie Talen Horton-Tucker was very solid in his 19 minutes against the Rockets, giving the franchise hope that the 6-4 guard can be a solid player. He had 10 points on four-for-six shooting, with two rebounds and one assist. Perhaps more importantly, he played hard and with intensity throughout the game.

Five things to be stressed about

2. Where is the Lakers offense? Since entering the bubble, the Lakers can’t seem to score. In their first four seeding games, the Lakers averaged just 99.3 points per game, ranking them last among the 22 teams playing at the ESPN Wide World of Sports Complex. They were last in field-goal shooting (39.8%) and three-point shooting (25.2%) entering the game against the Rockets. The Lakers had the sixth-worst plus-minus rating among the 22 teams at -6.0.

3. It’s time for Danny Green to start playing like the champion he was when he won titles with the Spurs and Raptors. Green had 10 points on five-for-seven shooting against the Rockets. But in the first four restart games, Green was averaging just 5.8 points and shooting 32.1% from the field and 20% from three-point range. He was a minus-9.3 in the plus-minus category.

4. Kentavious Caldwell-Pope is starting at guard because Avery Bradley opted not to play because of his son’s health. Caldwell-Pope, however, has been inconsistent. He had 10 points against the Rockets on four-for-seven shooting. But in the first four seeding games, Caldwell-Pope was averaging 6.4 points and making 37% of his shots and 23.1% of his three-pointers. He was a minus-8.3 in the plus-minus department.

5. The Lakers need to take a better approach to the final three seeding games. They have played with a purpose just once, and that was in the first game against the Clippers. Since then, the intensity seems to be lacking. They have to stop using the excuse about trying to find the rhythm they had in March. They still have time to get their act together, but they have to start soon.

Letters: Welcome to a baseball season unlike any other