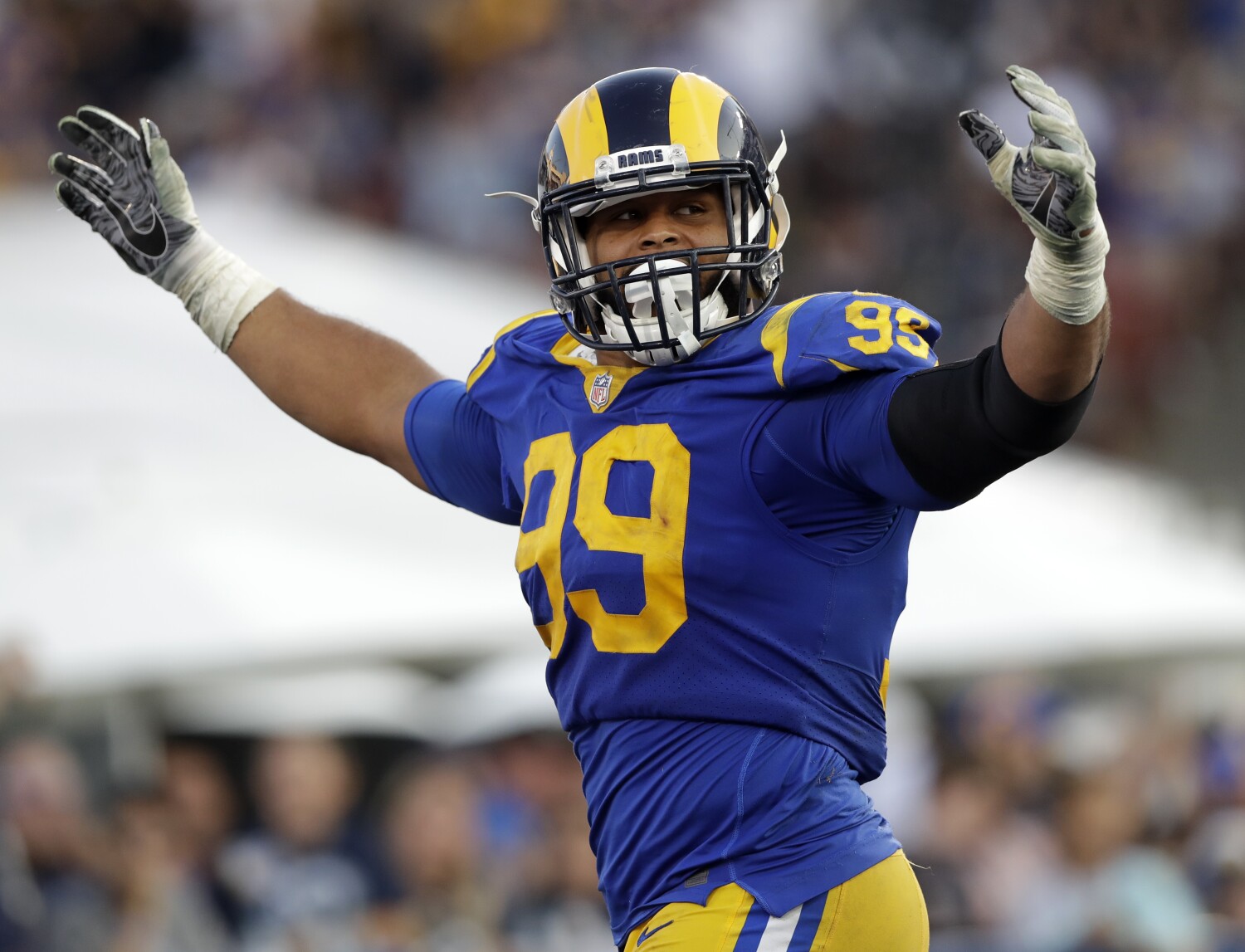 Protocols to stave off the spread of the novel coronavirus are in place at the Rams’ facility. Players get tested daily. They wear masks and practice social distancing.

Star defensive lineman Aaron Donald is getting accustomed to the new reality. But the six-time Pro Bowl player earns his living in tight quarters along the line of scrimmage.

Once full-speed practices and games begin, keeping a distance won’t be an option.

“Football is a contact sport, up close,” Donald told reporters Wednesday during a videoconference. “We’re slobbering, spitting and bleeding on each other.

“So, we need guys to do what they need to do so we can be able to do our part and play the game. If guys do it the right way — we’ll be fine. If not, it probably won’t happen.”

Donald, a two-time NFL defensive player of the year, is one of the main pieces of a defense in transition under new coordinator Brandon Staley.

Donald and cornerback Jalen Ramsey are high-profile cornerstones in what is expected to be a hybrid 3-4 scheme.

During the spring, Staley joked that Donald was so accomplished “he’s going to play well if my wife’s coaching him.”

The Rams are in the midst of a two-week acclimation phase of training camp. Players are participating in meetings, conditioning drills and walkthroughs. So Donald, who has 72 sacks in six NFL seasons, is getting a feel for how Staley plans to deploy him.

“Before we even got here, he called me multiple times and talked to me about certain things he wants to do to try to put me in good positions,” Donald said. “I got excited about it.”

The walkthroughs, have enabled him to get a feel for how he can “put my own swag and own style to it.”

Donald, 29, is in the second year of a six-year, $135-million extension he received before the 2018 season. After signing the then-record deal, he amassed 20½ sacks — the most by an interior lineman in NFL history — as the Rams advanced to the Super Bowl.

Last season, Donald had 12½ sacks for a team that finished 9-7 and missed the playoffs.

Despite the pandemic, and the virtual offseason program it forced NFL teams to adopt, Donald said that in hometown Pittsburgh he adhered to the same kind of workout regimen that has annually prepared him to operate as one of the league’s most disruptive forces.

Some Pittsburgh facilities were closed, but he and his trainer made do, bouncing from field to field to perform drills. He also worked out in “The Dungeon,” the basement gym in his childhood home.

Donald said it was important for players to follow protocols while at the facility and to avoid large groups away from it.

“People are going to do what they want to do outside the facility and make their own decisions,” he said. “You’ve got young guys, some guys aren’t family men, sometimes they might be lonely at home, but as long as they keep themselves distanced from all of that close contact with a bunch of people, we’ll be fine.

“I think they know what the risks are. If they don’t do their part, we won’t be having any football.”

On the field, Donald said he probably would not wear a face shield.

“I need air when I’m out there running around and breathing with them long drives and stuff,” he said. “I feel like, we’re out there, we’re playing up close, there is nothing you can really do — if a guy got [the coronavirus] and I tackle the guy, then I probably got it…. So, hopefully these guys are just doing what they need to do.”

The Rams open the season on Sept. 13 against the Dallas Cowboys at brand new SoFi Stadium. But there will no fans — or a limited number — in a venue that seats more than 70,000 for football.

Donald has watched televised baseball games with no fans in the stands.

“It’s weird,” he said. “It doesn’t seem as fun. The excitement is kind of off… I definitely think we need some type of fans in the stadium, even if it’s not a full house.

“I feel like they can do a thing or two, to the point where they can get people in the stadium but get nice space and spread it out good enough to make it work.”