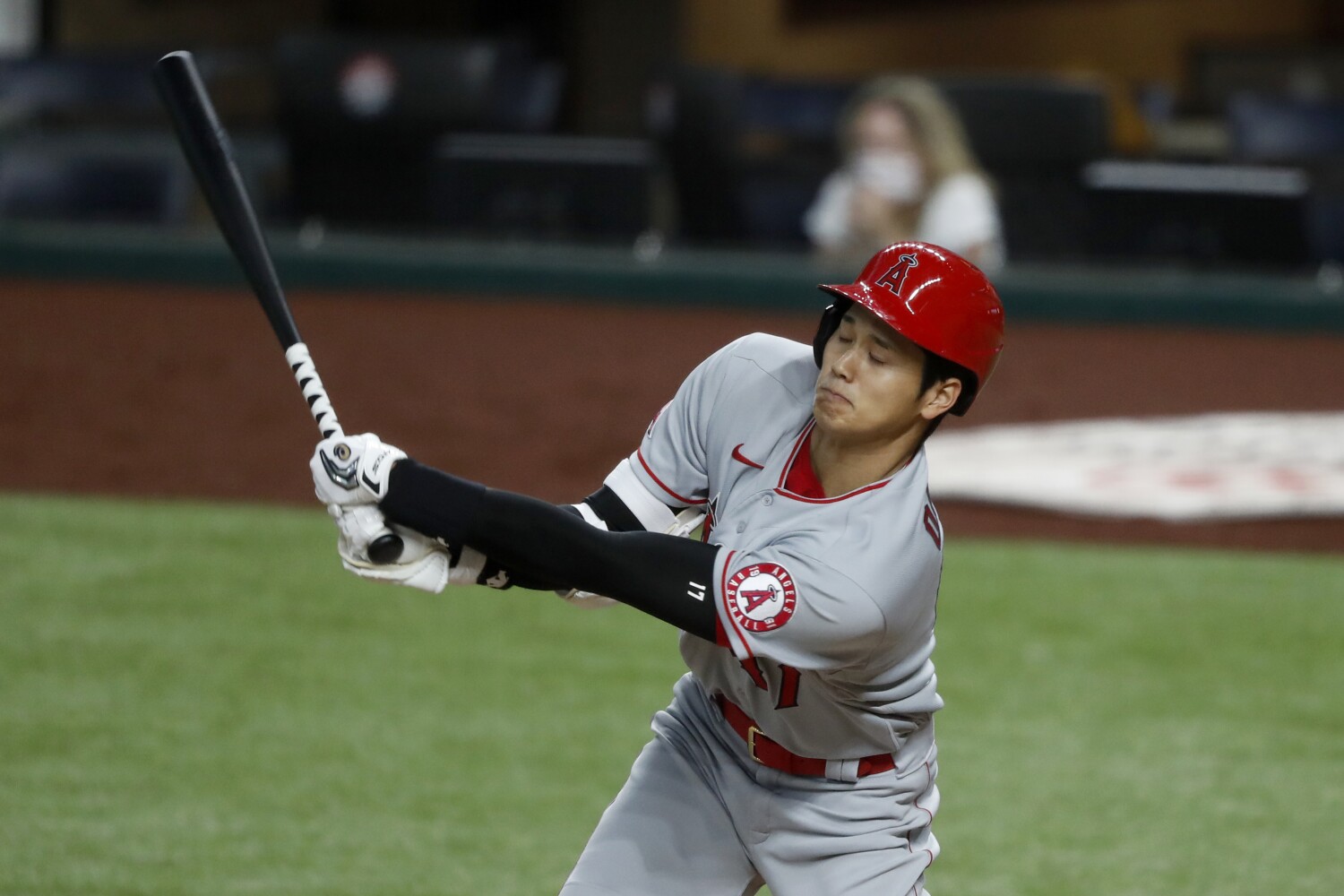 The Angels are off to a poor start in this unprecedented 60-game season, and it’s really no secret why.

They’re not hitting when it counts.

It was obvious in Saturday’s 2-0 loss to the Texas Rangers in Arlington, Texas. They wasted three opportunities to deliver rookie Patrick Sandoval the first victory of his career. They squandered two more chances to take him off the hook of a hard-luck loss after his departure. Held to four hits and two walks, the Angels stranded all six men.

The most vexing sequence occurred in the top of the eighth inning. Anthony Rendon strode to the plate with a runner at first base and two outs to face right-hander Ian Gibaut, a rookie who carried into the game a 6.53 ERA in 20 2/3 major league innings. Gibaut might not have been summoned if either of the Rangers’ setup men had been available to take on the top of the Angels’ batting order.

In other words, fortune should have favored Rendon.

Fate intervened. Rendon worked a 2-and-2 count after fouling off Gibaut’s first two pitches, but he failed to push the count further in his favor. He struck out chasing a 96-mph fastball down and away from him.

Rendon, hitless in his last 24 plate appearances, threw away his helmet and spiked his bat.

Frustration didn’t tinge manager Joe Maddon’s voice after the Angels fell to six games out of first place in the American League West. He preached patience, despite how heavily weighted every game is in an abbreviated season.

“We’re better than that,” he said. “In the meantime, you just got to be patient, support them and keep throwing them back out there. That’s how I approach moments like this. … We got to figure it out quickly, no question. But a lot of these guys, we know they’re capable of more.”

The short training camp and lengthy coronavirus-related shutdown that preceded this season has affected hitters across baseball. Entering Saturday, the league’s mean batting average was .231. Last year, the league average was .252.

But Maddon’s hope for improvement doesn’t lessen the sting of the Angels’ early troubles.

Rendon isn’t the only culprit. Shohei Ohtani is batting .111 and is striking out at a higher rate (35%) than he did his first two seasons combined (26.8%).

The Angels are batting .211 overall and .217 with runners in scoring position despite a retooled — and pricey — lineup that was expected to pose a tremendous threat. They have lost 10 of 15 games. At no point have they strung together consecutive victories.

Earlier in the week, the Angels shook up the status quo. They called up top prospect Jo Adell on Tuesday. Struggling Justin Upton, a veteran in the third season of a five-year, $106-million contract, was moved into a platoon role.

Maddon might not feel the need to enter full panic mode yet because of the expanded postseason field. Eight teams from each league — not the usual five — will receive entry to the playoffs. If the postseason started Sunday, the eighth-place Tampa Bay Rays would have earned a berth with a 7-8 record.

There is time for Angels hitters to heat up and make up ground.

But not much of it.

— Mission Viejo High product Patrick Sandoval dueled San Clemente High’s Kolby Allard for five innings. Both were drafted in 2015. Over five innings, neither gave up a run and both limited their opponents to two hits. Sandoval outlasted Allard in the game but took the loss after giving up a two-run homer to Joey Gallo on the 88th pitch of his outing.

How Jeff Hart copes with 250-yard drives at PGA Championship