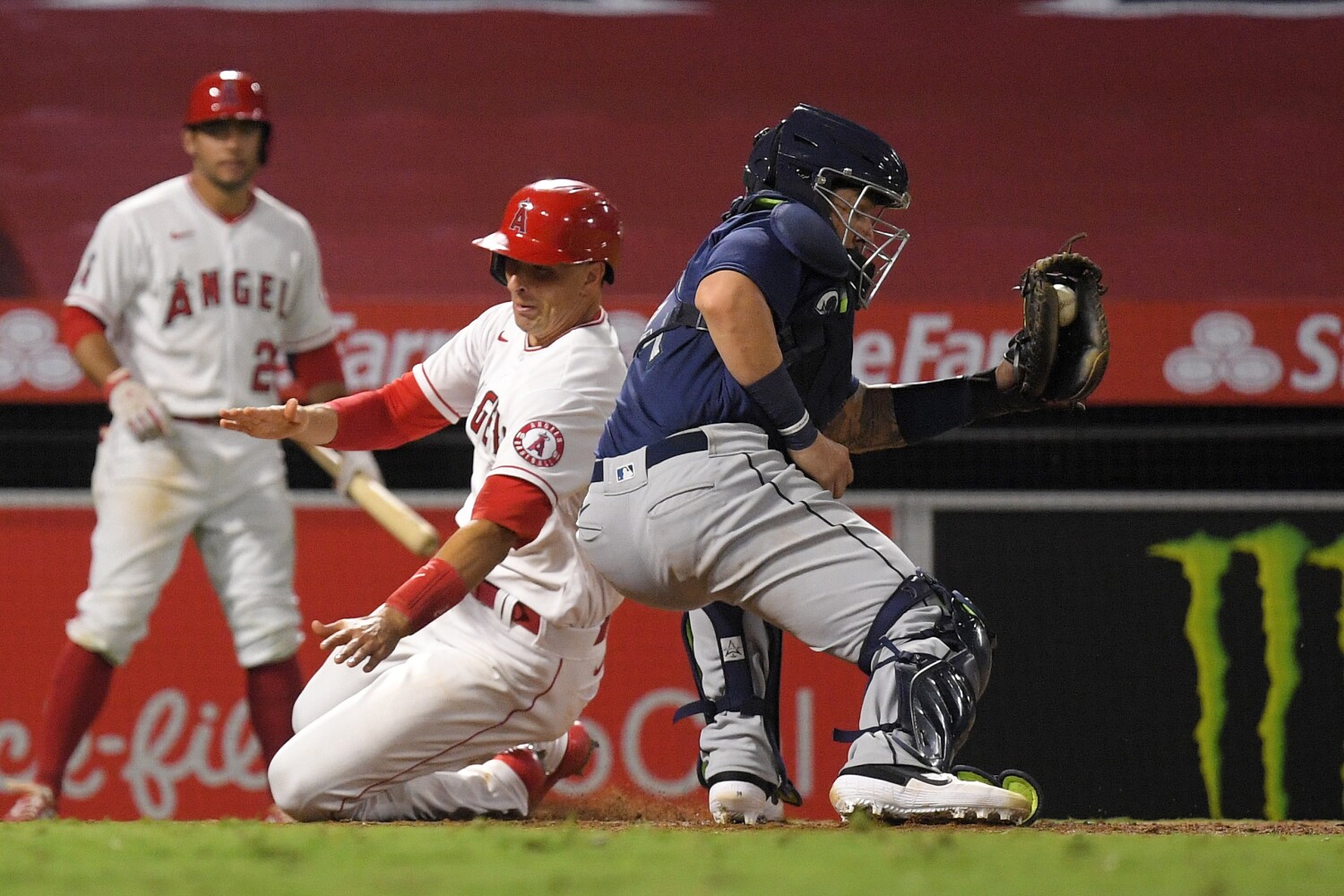 New Angels third baseman Anthony Rendon marveled at his team’s bullpen Tuesday night after five relievers threw scoreless innings and combined to give up three hits and strike out seven in a win over the Seattle Mariners.

“Man, we have some great arms on this team,” Rendon said. “I guess that was a question mark coming into this season or over the last few years, but since I’ve been here, these arms have been electric. These guys know what they’re doing out there.”

First impressions, it turns out, can be deceiving.

Three of the pitchers who took part in Tuesday night’s stout relief effort — right-handers Mike Mayers and Jacob Barnes and left-hander Ryan Buchter — were pummeled for a combined seven runs and six hits in Wednesday night’s 10-7 loss to the Mariners in Angel Stadium.

Mayers failed to hold a 4-1 lead in the sixth, the Mariners scoring five times for a 6-4 lead. Former Placentia El Dorado High standout Dylan Moore provided the big blow, capping the rally with a three-run homer to right-center field.

Justin Upton pulled the Angels to within 6-5 with one out in the bottom of the sixth when he belted the 300th home run of his career, a solo shot to center, off Seattle reliever Brian Shaw.

Tommy La Stella lined a single to left and was rubbed out at second on Jared Walsh’s fielder’s-choice grounder. Jason Castro walked to put two on, and Brian Goodwin, who hit a solo homer in the fifth, split the gap in right-center with a two-run double that gave the Angels a 7-6 lead.

Back came the Mariners in the seventh. Pinch-hitter Shed Long led off with a single to right off Barnes. J.P. Crawford and Evan White walked to load the bases with no outs.

Angels manager Joe Maddon pulled Barnes in favor of right-hander Ty Buttrey, who retired Kyle Lewis on a slow roller to third, with Long scoring the tying run, and Kyle Seager on a sacrifice fly to center for an 8-7 Seattle lead.

Buttrey got Tim Lopes to ground out to end the inning but was still charged with a blown save despite retiring the three batters he faced in the inning.

The Angels threatened in the bottom of the seventh when Mike Trout led off with a single to left off right-hander Taylor Williams. Rendon struck out looking at a knee-high 96-mph fastball. White took second on Shohei Ohtani’s groundout to second, but Upton grounded to third to end the inning.

Seattle tacked on two more runs in the eighth when Dee Gordon drew a two-out walk off Buttrey, Long walked off Buchter and both runners advanced on Castro’s passed ball. Crawford’s two-run single to center made it 10-7.

Angels starter Andrew Heaney gave up two earned runs and five hits in five innings, striking out six and walking one, but there was something about his five-pitch walk to Crawford to open the sixth that Maddon didn’t like.

Heaney’s pitch count stood at a very reasonable 64 — he faced the minimum nine batters through three innings — but with a 4-1 lead, Maddon pulled the left-hander in favor Mayers.

White flied out to right. Lewis singled to right, advancing Crawford to third, and Seager hit an RBI single to center that moved Lewis to third. Lopes stroked an RBI double to right-center to pull Seattle to within 4-3.

Mayers struck out Jose Marmolejos with an elevated 94-mph fastball for the second out, but he couldn’t get that last out to squash the rally. Moore’s homer gave Seattle a 6-4 lead.

The Angels scored three runs in the fourth when Ohtani stroked a low-and-inside, 81-mph curveball from Seattle starter Justin Dunn into the right-center field seats for a three-run homer, his first of the season.

The Angels optioned left-hander Patrick Sandoval, who threw four innings in Tuesday night’s start, to their alternate training site in Long Beach and added reliever Luke Bard to the roster. … With his solo shot Tuesday, Albert Pujols has homered against 423 pitchers in his career, second- to Barry Bonds (449).

1. Mayers meltdown: Left-hander Andrew Heaney was in line for the win after giving up two earned runs and five hits, striking out six and walking one, in five innings. Heaney departed with a 4-1 lead after walking J.P. Crawford to open the sixth. Mike Mayers came on and gave up a single to Kyle Lewis, an RBI single to Kyle Seager, an RBI double to Tim Lopes and a three-run homer to Dylan Moore for a 6-4 Mariners lead.

2. Breaking bad: Mariners starter Justin Dunn tried to slip three straight curveballs by Shohei Ohtani in the fourth inning. The Angels designated hitter took the first two for strikes but golfed the third one, an 81-mph offering that was low and inside, over the right-center field wall for a three-run homer and a 3-1 Angels lead. It was the only hit Dunn gave up in his three-inning start.

3. Keen eye: Anthony Rendon is that rare slugger who combines power and plate discipline, and he has shown both in his first two games as an Angel. The third baseman walked twice and clubbed a two-homer Tuesday night, and he walked in his first two at-bats Wednesday night, the second time ahead of Ohtani’s home run in the fourth.

Elliott: Katrina Scott trying to make a name (and bio) for herself at U.S. Open