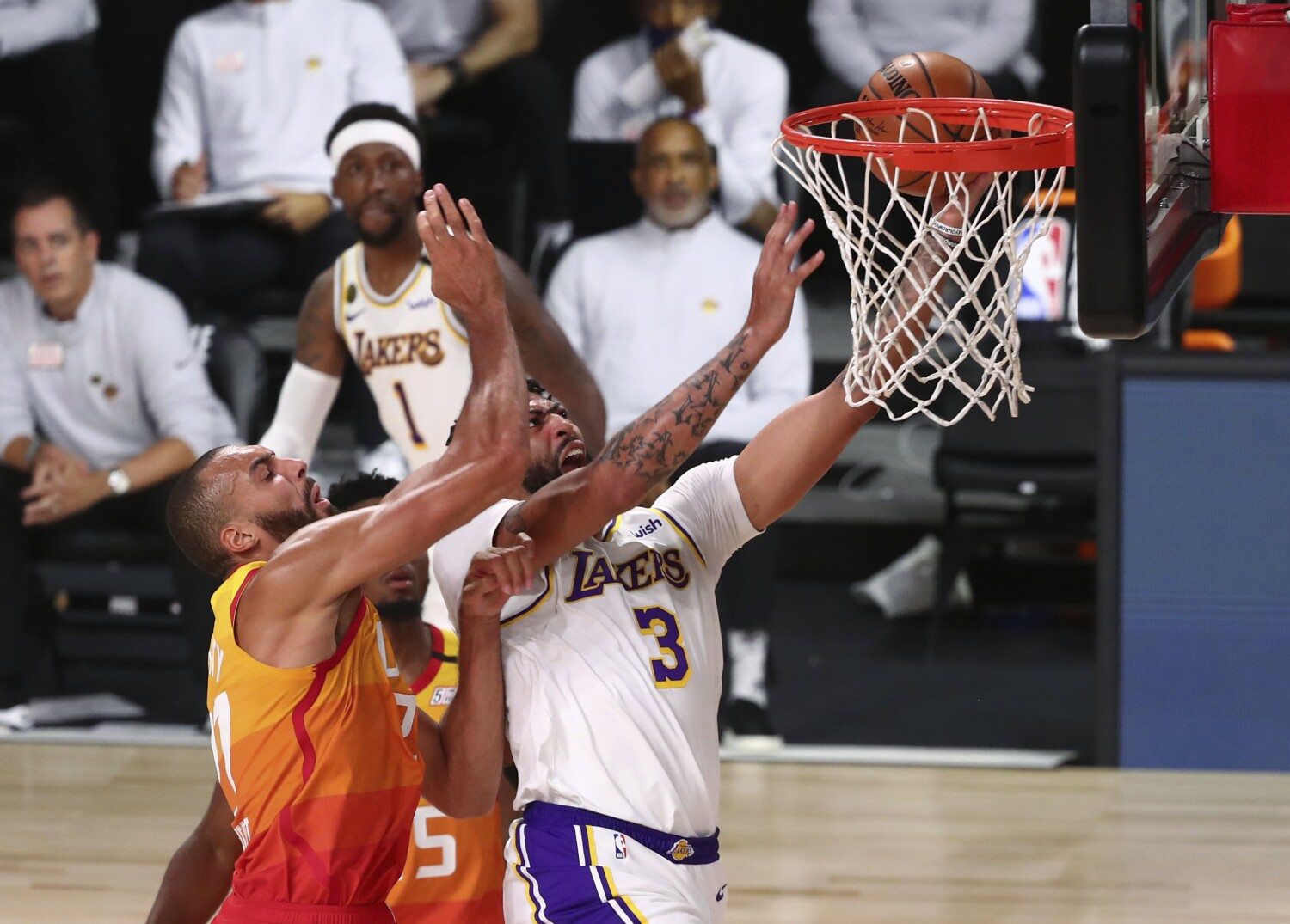 LeBron James smiled triumphantly between bites of his postgame snack in a hallway behind the Lakers’ postgame interview enclave.

The Lakers had just clinched the No.1 seed in the Western Conference with a 116-108 victory over the Utah Jazz. This is the first time in 10 years that the Lakers will end the season as the West’s top seed.

Monday night’s win marked the next step in the plan that began when the Lakers signed James in the summer of 2018. The road wasn’t smooth — there were bumps as the Lakers and James together worked to figure out how to accomplish a return to glory. They added Anthony Davis, who scored 42 points, grabbed 12 rebounds and made four three-pointers against the Jazz. They added a supporting cast that James and Davis could trust. And more than 13 months later in the most unlikely of places — in an arena where no fans were allowed on the campus of Walt Disney World — James could celebrate a milestone.

“I can just say it feels damn good to be the number one seed in the West,” James said. “For me, personally.”

He scored 22 points and added eight rebounds and nine assists, and with the win the Lakers improved to 51-15. The Jazz fell to 42-25, still hanging on to the fifth seed in the West.

Utah led for much of the first half and took advantage of the Lakers’ shooting struggles. The Lakers trailed the Toronto Raptors 13-0 to start the game Saturday night in what became a 107-92 loss, and they trailed the Jazz 7-0 early on Monday.

But one thing that changed early was Davis’ impact.

Two nights after being neutralized by the Raptors, Davis wasn’t going to let that happen again. The Jazz entered Monday’s game aware that they needed to contend with the Lakers’ size and length, but they couldn’t contain Davis.

“I just tried to come out very aggressive and just kind of lead the pack,” Davis said. “And the rest of the guys did the same thing.”

He took more shots in the first quarter against the Jazz than he did in the entire game against the Raptors. By halftime, Davis had scored 24 points on eight-for-17 shooting, while also making seven of 10 free throws.

Davis was also active defensively, and his work helped the Lakers through a challenging stretch. At halftime, the Lakers led 58-56.

“They really don’t have a great matchup for him, in my opinion, so they put Rudy [Gobert] on him and gave him a little length,” Lakers guard Alex Caruso said. “You put someone small on him, he can post him up. You put somebody big on him, and he can bring them out, and he did that late in the game. He brought Rudy out to the perimeter and made some tough shots. He’s Anthony Davis. He does what he does.”

Still, the Jazz made a push to start the third, going on an 8-0 run to open the quarter. But by the end of the quarter, the Lakers had taken control of the game. They went into the fourth leading by 10. Although the Jazz pulled within six late in the fourth, the Lakers’ Kyle Kuzma answered with a three-pointer.

Then, with 42.9 seconds left, Davis sank his fourth three-pointer as Gobert knocked him over. The four-point play gave the Lakers a 10-point lead.

The race for the eighth seed in the Western Conference has been tight in the NBA bubble. Memphis entered in eighth place but has lost all three of its seeding games. The Portland Trail Blazers are in ninth, two games behind the Grizzlies. If the eighth and ninth seeds are within four games of each other, they will compete in a play-in game.

San Antonio and New Orleans also have a chance to sneak into the playoffs, though they are 10th and 11th in the conference.

“I think it’s absolutely unhuman if you wasn’t really paying attention to the seedings, especially at this point in the season,” James told The Times. “You’re looking at Memphis and Pelicans and San Antonio and Portland. I’m not taking out Phoenix as well. You’re just seeing the games and seeing what can possibly be our matchups.”

As he spoke, James was waiting for Davis to arrive so they could walk to the team bus together. It’s a routine they’ve fallen into. Soon, Davis joined him in the hallway and they walked off side by side. This night would allow for some time to celebrate before they moved together toward their heady goal of winning a championship.

1. Before the game, coach Frank Vogel’s only complaint about the team was its shooting. “Our shooters haven’t shown up,” he said. That didn’t change in the first half against the Jazz. Until that point, the Lakers had made just 25.8% of their three-point tries while in the bubble. The Lakers finished nine for 26 (34.6%) in Monday’s win.

2. Anthony Davis was not only active offensively but also gave the Lakers a boost defensively. He had two steals in the first half and added a third in the third quarter. He finished the game with 12 rebounds.

3. The game-operations folks in Orlando still are trying to figure out the right balance of crowd noise in the arenas. Monday’s game was one in which the artificial crowd noise was low, leaving those in the arena able to hear many officiating complaints.